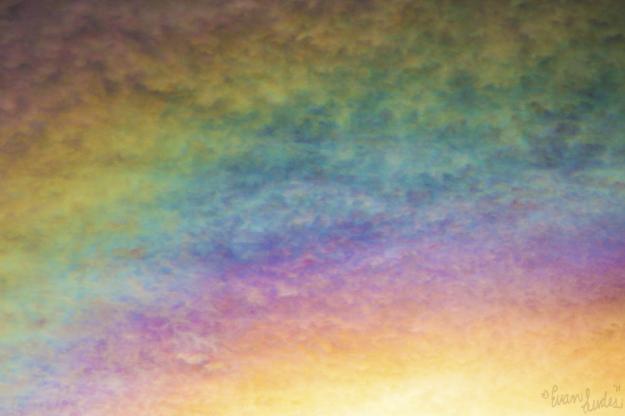 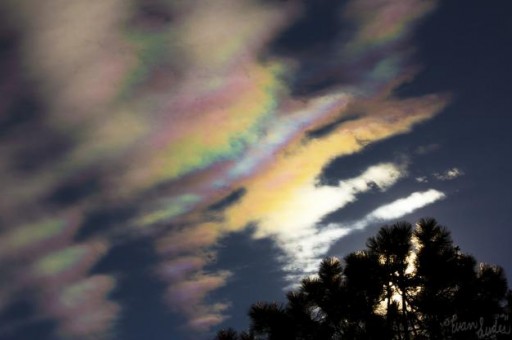 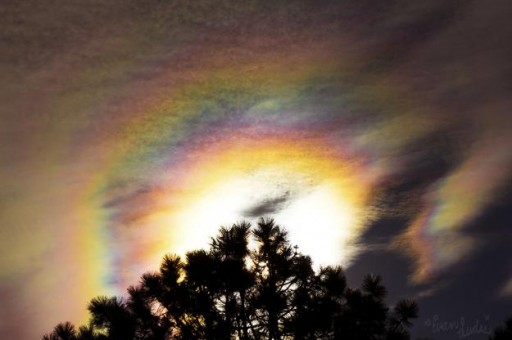 Iridescent colors appear when sunlight shines through water droplets in the edges of clouds. The mechanism is diffraction. The colors are at their brightest and most distinct when the droplets are small and uniformly-sized.

Let us explain how this works;

When parts of clouds are thin and have similar size droplets, diffraction can make them shine with colours like a corona. In fact, the colours are essentially corona fragments. The effect is called cloud iridescence or irisation, terms derived from Iris the Greek personification of the rainbow.

The usually delicate colours can be in almost random patches or bands at cloud edges. They are only organised into coronal rings when the droplet size is uniform right across the cloud. The bands and colours change or come and go as the cloud evolves. They occur most often in altocumulus, cirrocumulus and especially in lenticular clouds. Iridescence is seen mostly when part of a cloud is forming because then all the droplets have a similar history and consequently have a similar size.

Sometimes iridescence can be seen far from the sun but is most frequent near to it. As for coronas, search safely by hiding the sun behind a building and, even better, also viewing the reflection of the sky in water. Very much rarer iridescence is that of nacreous or mother-of-pearl clouds. They can glow very brightly and are far higher than ordinary tropospheric clouds. Iridescence is also seen in rocket exhaust trails.

Scattered light from the whole droplet surface plus smaller contributions from reflected and transmitted waves combine to form a diffraction pattern – a corona. A corona is produced by diffraction of light by small particles. Every point on the illuminated surface is a source of scattered outgoing spherical waves. It is also called  Huygens-Fresnel Principle. 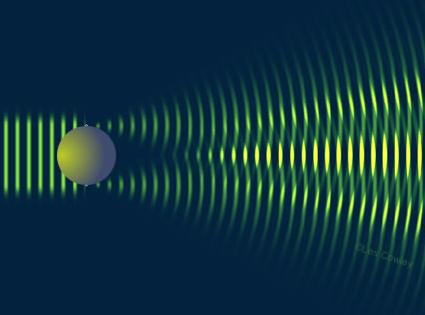 The outgoing waves mutually interfere to give regions of enhanced brilliance, constructive interference, and darkness destructive interference. Scattering from only two points is shown on the diagram. Along the central axis, the incident light direction, the crests of the two scattered waves always coincide to form a region where the light is strong.

Moving away from the axis, there is a direction where the crests again coincide to give beams of enhanced brightness at an angle to the incident light. In between there is a region where crests of one wave coincide with those of opposite amplitude of the other. The two waves cancel and there is darkness in those directions.

There is a another coincidence of wave crests at a larger angle and the light intensity is again enhanced. With increasing angular distance from the axis there are alternating bright and dark regions, a diffraction pattern. (AtOptics)