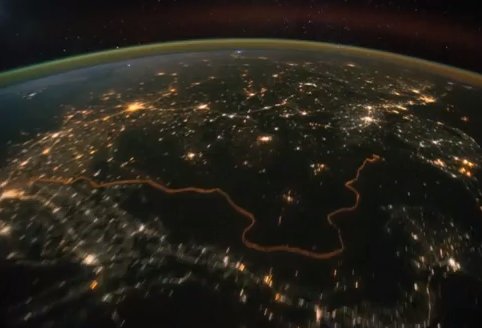 While passing over Middle East and South Asia crew of International Space Station took another amazing images and video of nigh shining city lights on October 21st. Expedition 29 crew made an animation from dozens still images assembled by the Image Science and Analysis Lab at Johnson Space Center in Houston.

Gateway to Astronaut Photography on Earth

Airglow is visible as a band of hazy green light surrounding the planet and lightning in clouds seen as sharp flashes. The distinct, bright zone above the horizon (visible at image top) is airglow, a phenomena caused by excitation of atoms and molecules high in the atmosphere (above 80 kilometers, or 50 miles altitude) by ultraviolet radiation from the Sun. Border between India and Pakistan could be seen as bright orange line that was build 2003. by Indian goverment for smuggling prevention. Fences with floodlights stretch for nearly 1930km (1200miles) an it could be seen from space. 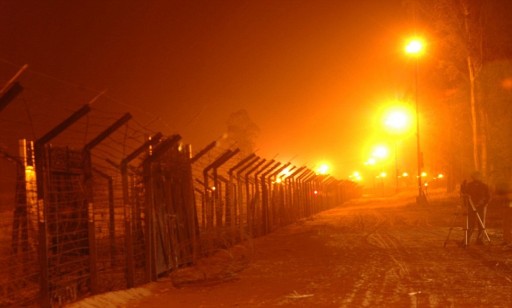 In total, the Indian government hope to cover 2009 km (1248 miles) of the 2900 km (1800-mile) India-Pakistan border with floodlights. Officials have so far erected floodlights along 460 km (286 miles) of Indian border with the Pakistan state of Punjab. The extensive floodlighting continues for 1022 km (635 miles) across Rajasthan, 176 km (109 miles) across the Jammu international border, and 202 km (125 miles) through Gujarat.

So far 1861 km(1156 miles ) of the border have been floodlit. Plans are in place to erect a total 2043 km (1269 miles) of fencing along the nation’s border.  The Indian government hope to have completely finished the floodlight operation by March 2012. (DailyMail)

The sequence of shots was taken October 21, 2011 from 19:53:26 to 20:25:24 GMT, on a pass beginning over Turkmenistan, east of the Caspian Sea to southeastern China, just northwest of Hong Kong. City lights show at the beginning of the video as the ISS travels southeastward towards the India-Pakistan borderline (click here for the Earth Observatory article to learn more about this area). Pakistan’s second largest city, Lahore, can be easily seen as the brightly lit area left of track. Immediately downtrack of Lahore is New Delhi, India’s capital city, with the Kathiawar Peninsula right of track dimly lit. Smaller cities in southern India can be seen as the pass continues southeastward through southern India, into the Bay of Bengal. Lightning storms are also present, represented by the flashing lights throughout the video. The pass ends over western Indonesia, looking left of track at the island of Sumatra.