The Indonesian Volcanological Survey (PVMBG) has raised the alert status for Anak Ranakah volcano in the district of Manggarai on the island of Flores in southeastern Indonesia to 2 out of 4 (meaning eruption warning) on 26 August.
Seismic activity and volcanic have increased recently and the lava dome of Anak Ranakah is emitting a small plume of white steam.
Very little is known about Ranakah volcano. There is only one previous eruption, which constructed Anak Ranakah lava dome in December 1987 - January 1988 during the first historic eruption of 2247 m high Ranakah volcano. The lava dome produced powerful explosions with ash plumes up to 8 km height and pyroclastic flows.
There is concern that collapse of parts of the instable lava dome could trigger pyroclastic flows. Local people have been advised to stay far from the summit and climbers are currently not allowed to approach it. Volcanologists are monitoring the situation and local authorities. (VolcanoDiscovery) 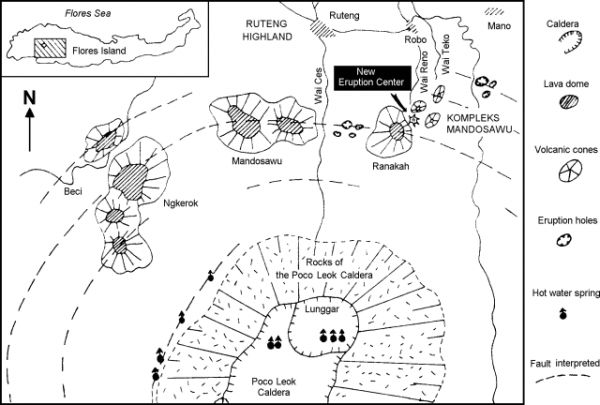 A new lava dome formed at the base of the large older lava dome of Gunung Ranakahin in 1987 and was named Anak Ranakah (Child of Ranakah). No previous historical eruptions were known from Ranakahin. An arcuate group of older lava domes extending westward from Gunung Ranakah occurs on the outer flanks of the poorly known Poco Leok caldera on western Flores Island. Pocok Mandosawa lava dome, at 2350 m the highest point on the island of Flores, lies west of Anak Ranakah.