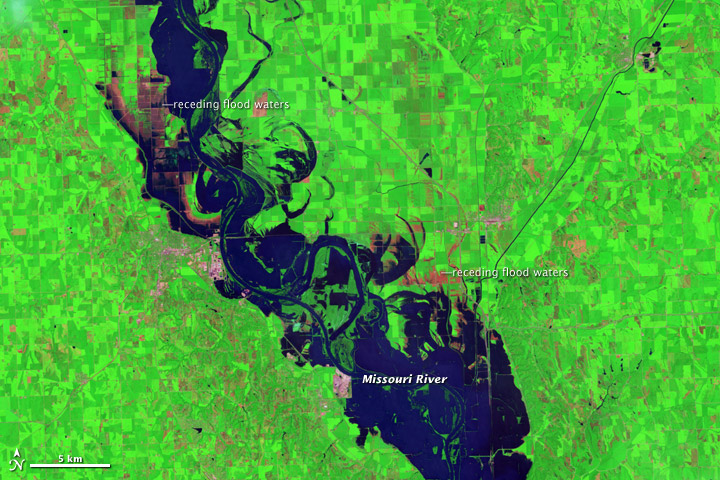 At the beginning of August 2011, flood waters were slowly receding along the Missouri River in eastern Nebraska. On August 3, 2011, the Advanced Hydrological Prediction Service (AHPS) of the U.S. National Weather Service reported moderate flooding at multiple communities on Nebraska’s eastern border. 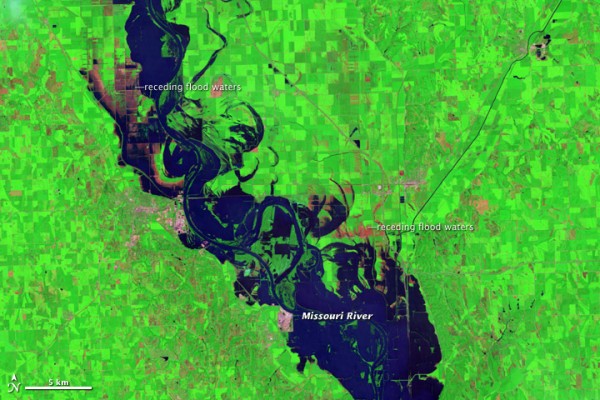 The Thematic Mapper on the Landsat 5 satellite captured these images of the Missouri River on August 1, 2011. They show the river and surrounding floodplains near the town of Blair, about 20 miles (30 kilometers) north-northwest of Omaha.

The top image is false color and the bottom image is natural color. While the natural-color image gives a realistic view similar to an aerial photo, the false-color image better distinguishes between water and land. Along the length of the Missouri River, muddy water both fills the river channel and pools on floodplains and croplands to the east and west.

The high water captured in this image continues a two-month-long pattern of flooding on the Missouri River. Following the Mississippi River flooding, floods in the Missouri basin were driven by a combination of heavy snowpack and heavy rain.Imagery acquired by the Moderate Resolution Imaging Spectroradiometer (MODIS) in July compares the 2011 floods in eastern Nebraska to more typical conditions in 2010.

As of August 3, the AHPS said the Missouri River reached its 2011 crest near Blair on June 29, at 32.73 feet (9.98 meters). This was the second-highest level recorded for Blair (the highest level was recorded in 1952). The AHPS noted, however, that the 2011 crest data were provisional and could change. As of 7:00 a.m. on August 3, the Missouri River near Blair reached 30.84 feet (9.40 meters), and a flood warning was in effect for Blair and several other cities along the Missouri. (EarthObservatory)