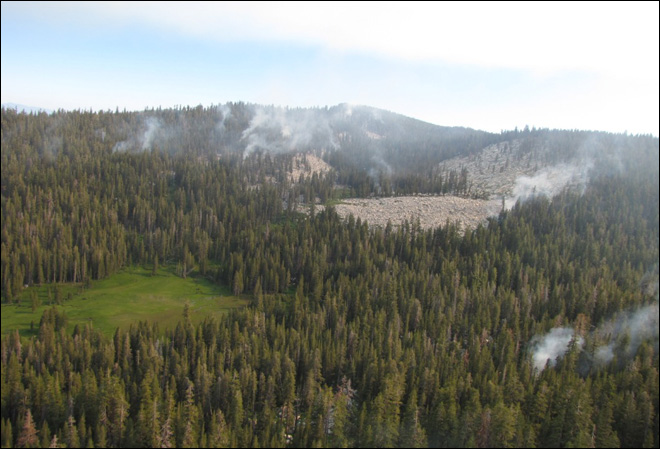 The Lion Wildland Fire was ignited by lightning on July 8 and is located in the Golden Trout Wilderness on the Sequoia National Forest. The Lion Fire, presently at 17,436 acres, continues to grow as firefighters focus on securing the perimeter and containing the fire. The fire is 15% contained.

Aerial ignitions completed to the northwest have met the main fire that crossed Soda Spring Creek and have helped moderate the fire intensity in this area. On the west, structure protection of the Peck’s Cabins, a private in-holding surrounded by Golden Trout Wilderness, continues with burning operations near the cabins and along Peck’s Creek to the south to secure that line. 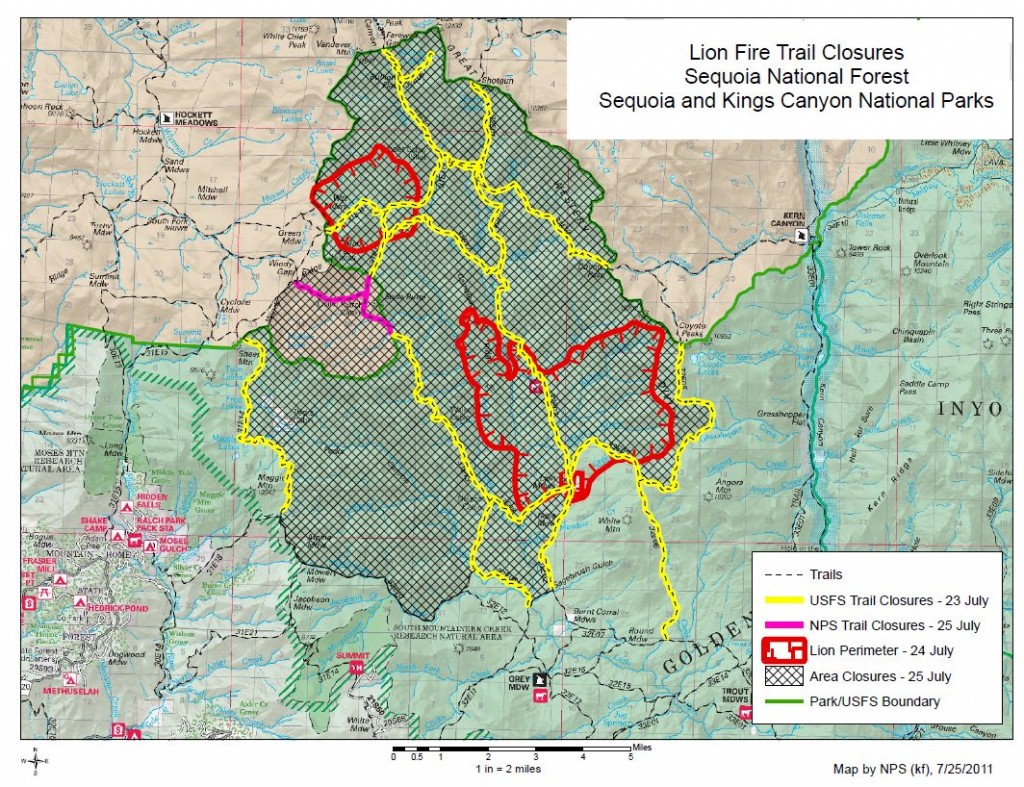 To the north, fire crews have completed burnout and other structure protection operations for the Quinn Patrol Cabin within Sequoia National Park. Other parts of the perimeter are being contained by rocky ridges or past wildfires. This cabin, constructed in 1906, was used by the US Cavalry as a patrol cabin for the recently-formed park. The US Cavalry was responsible for patrol and protection of the park prior to the formation of the National Park Service in 1916. The cabin is listed on the National Register of Historic Places.

On the south and east side, firefighters are working aggressively to hold the fire from spreading across Lion Creek. Residents and visitors should continue to expect smoke in the Kern River Valley, eastern Sierra towns, and the mountain communities of Tulare County. (InciWeb) 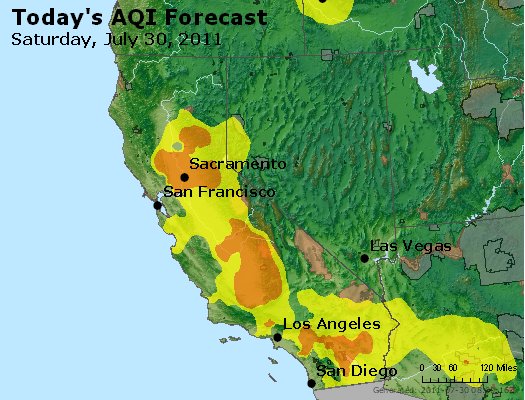 Tribal Boundaries
The tribal boundaries shown here are provided by the Bureau of Indian Affairs and are intended to be used as a general spatial reference only. They are not a formal determination of tribal boundaries by the EPA.

An area closure is in effect for parts of the Golden Trout Wilderness and Sequoia National Park. Fire information and a closure map can be found on Inciweb. 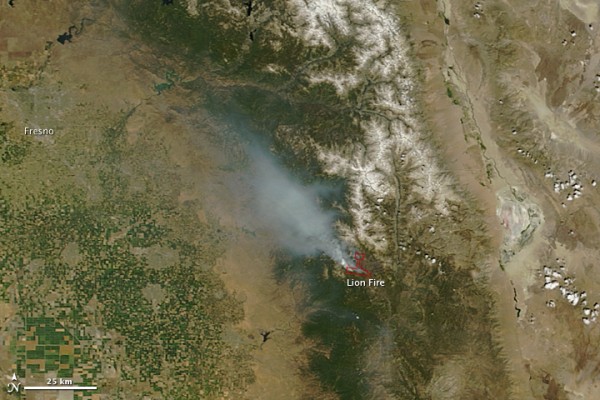 Today, the air quality was affected pretty much in the East US where PM2.5 and Ozone reached moderate and unhealthy for sensitive groups. Ozone levels started to increase after 2:00 PM eastern time in the Mid-Atlantic, Great Lakes and Plains States (top left). The situation was similar for PM2.5. However PM2.5 levels kept for longer time (top left).  PM2.5 and Ozone levels in California were moderate and unhealthy for sensitive groups as well.

Hazard Mapping Fire and Smoke Product continue to report fires and smoke from Quebec and Northern Canada. Light smoke presumably from wildfires in Siberia was detected in the Pacific Northwest and Northern part of the Rocky Mountain States during the morning. Lion wildfire in California continues to produce heavy smoke moving Northward (middle left). 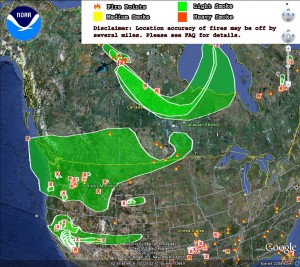 Aerosol with unknown composition or origin is present over the central Mid-Atlantic region in the vicinity of the Carolinas. This area likely contains urban pollution with a small component of smoke. MODIS Terra detected high AOD levels during the Mid-Atlantic region where the unknown Aerosol is been present (middle right).  Lidar observation at UMBC detected a strong stratified layer of aerosol aloft after 17:00 UTC (bottom) (US Air Quality) 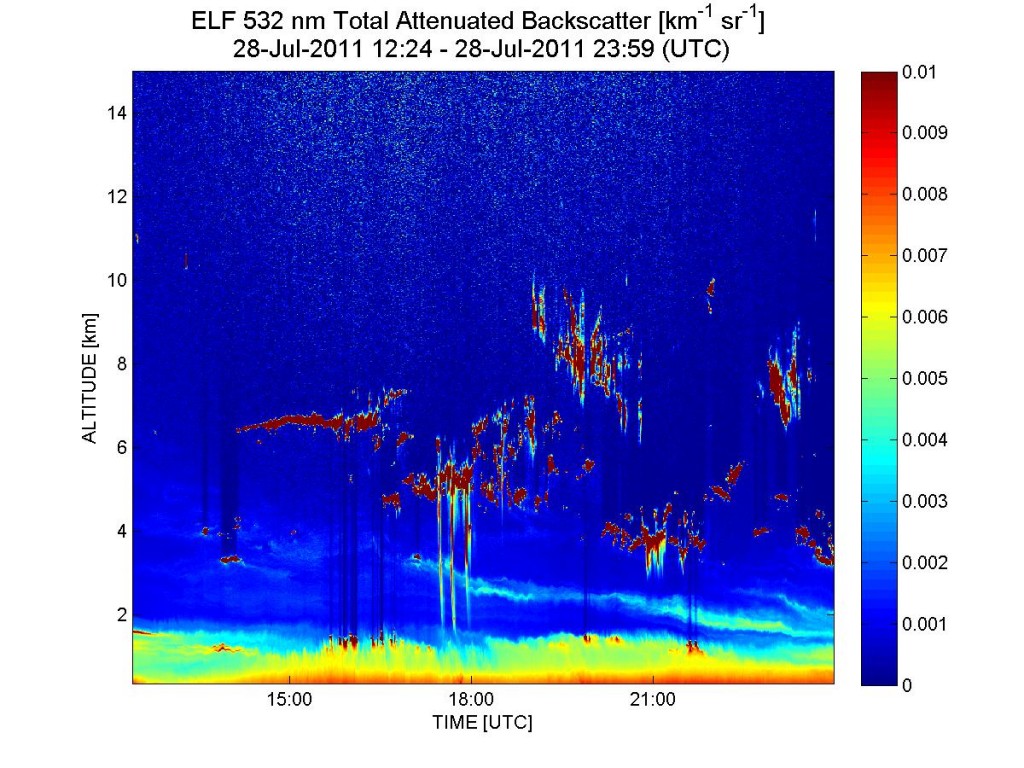