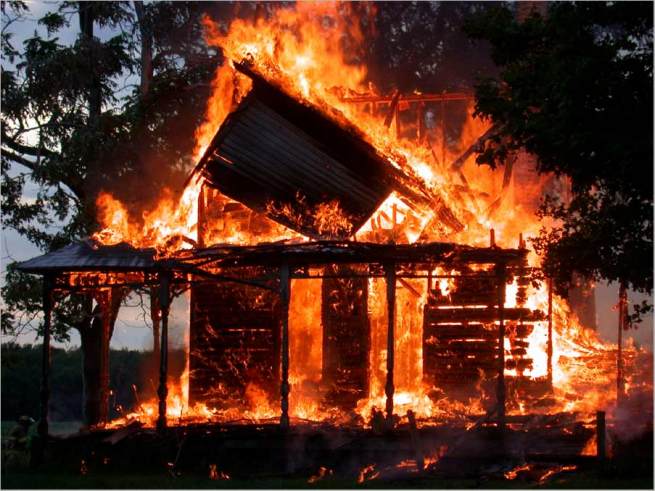 Mysterious fires that apparently ignite spontaneously have over the past two weeks destroyed the homes in Hopewell near Thornville. The freakish fires have burned through the Mthembu family’s main house, two low-cost houses in the yard, and another low-cost house belonging to the children, across the street from the main family home.

The charred remains of some of their possessions – beds, sound system speakers, plastic and steel washbasins, food, and clothes – lay in the yard on Sunday. The steel basins had melted. The remaining furniture that the family managed to pull out of the fire was strewn across the lawn as they kept watch over it.

Neighbors, fire-fighters, and managers from the Richmond municipality and Mgungundlovu district disaster management teams agreed that this was the first fire of its kind they have witnessed. They said they had seen the fire start spontaneously and burn through things that had been pulled from the house. Even the fire-fighters who had been called to the scene were puzzled. (News24)

“One female fire-fighter just about wet herself when the fire started right in front of her eyes and said she had never seen anything like this.  Just this morning we have put out at least three different fires” said one of the resident. "This kind of fire is not a normal fire. It is something that we have never seen before.”

The element sodium is an example of a pyrophoric material which can undergo a kind of spontaneous (and potentially very violent) explosion when exposed to oxygen, water, or moisture in the air. Pyrophoric substances have an autoignition temperature below room temperature and often require mere contact with air or water in order to spontaneously ignite. A characteristic of pyrophoric materials is also their large specific surface of contact with air. Raney nickel is pyrophoric because of the very fine size of its particles. Rieke metals are even more dangerous.

Haystacks, compost piles and unprocessed cotton may self-ignite because of heat produced by bacterial fermentation. Linseed oil in a partially confined space (such as a pile of oil-soaked rags left out in an uncovered container) can oxidize leading to a buildup of heat and thus ignition. Coal can spontaneously ignite when exposed to oxygen which causes it to react and heat up when there is insufficient ventilation for cooling. Pyrite oxidation is often the cause of coal spontaneous ignition in old Mine tailings. Pistachio nuts are highly flammable when stored in large quantities, and are prone to self-heating and spontaneous combustion. Large cow manure piles can spontaneously combust during conditions of extreme heat. When these materials come into contact with polyunsaturated vegetable oils (linseed, massage oils) bacteria slowly decompose the materials, producing heat. If these materials are stored in a way so the heat cannot escape, the heat build up increases the rate of decomposition and thus the rate of heat build up increases. Once ignition temperature is reached, combustion occurs with oxidizers present (oxygen).

Under certain conditions, trees with large enough radius can not transfer heat to their outer walls faster than it can build up according to the temperature based reaction kinetics. Despite the fact that the reaction is extremely slow under normal temperatures, the energy and temperature can build over the course of days allowing the tree to catch fire. In addition large areas of woodland, shrubland and grasslands during periods of dry hot weather are known to be capable of spontaneously combusting – though the mechanisms causing this are poorly understood. This has been proven to occur via the lifecycle of a variety of plants which require the area to be burned prior to germination.

People have also been reported as spontaneously combusting. This phenomenon is not considered true spontaneous combustion, as it is largely attributed to the wick effect, whereby an external source of fire ignites nearby flammable materials and human fat. (…)