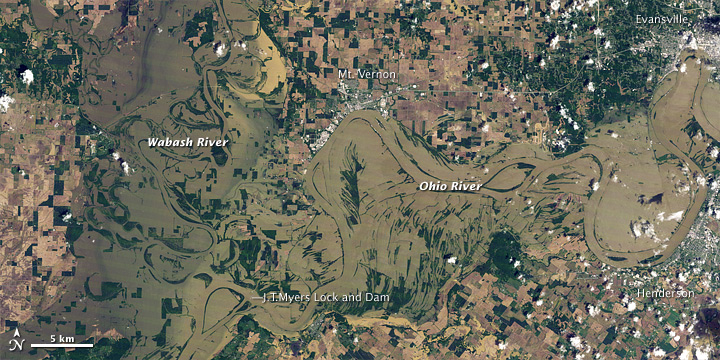 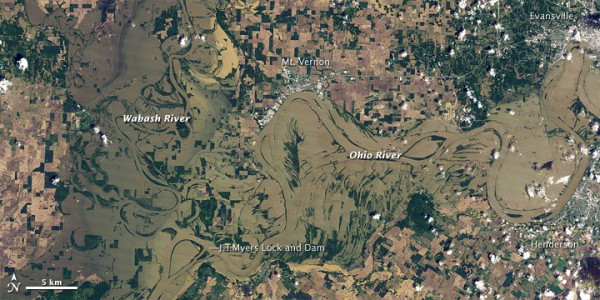 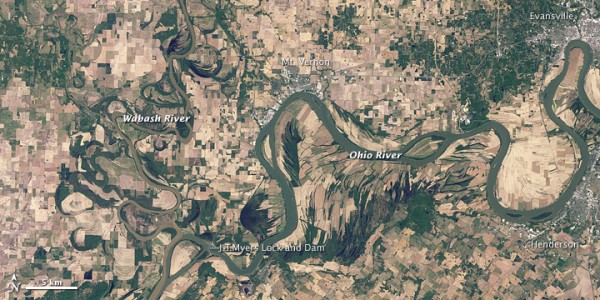 Rivers spilled over their banks at the confluence of the Wabash and Ohio in early May 2011. The flood waters inundated homes, businesses, and agricultural fields. The Thematic Mapper on NASA’s Landsat 5 satellite captured these natural-color images on May 3, 2011 (top), and April 14, 2010 (bottom).

Rivers were confined to their banks in April 2010, but the area was awash in muddy water 13 months later. In May 2011, vegetation lining the riverbanks provided ghostly outlines of the normal channels. Communities along the river—Mt. Vernon, Henderson, and Evansville—appear drier than nearby floodplains.

By April 30, floods had already blocked many roads, according to the Evansville Courier & Press. Residents had already started moving their belongings to higher ground, if not leaving altogether. On April 30, the Ohio River was forecast to crest on May 2 at the J.T. Myers Lock and Dam at just over 54 feet (16 meters)—the highest flood waters since 1950 in some rural farmlands. The river was predicted to crest on April 30 at 46.4 feet (14.1 meters) in Evansville.

Water levels were expected to slowly drop at all three locations, AHPS reported. On May 6, 2011, The Republic reported that flood waters had finally started to recede throughout southern Indiana, and officials had begun to survey damage. No tally of the total cost was yet available. (Earth Observatory)