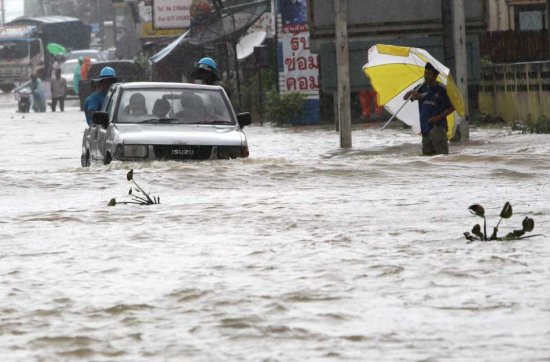 Two airports closed, boat and south-bound train services suspended, and almost one million people affected as the flood in southern Thailand worsened. The death toll continues to climb. Since 23 March 2011 there has been a prolonged heavy rainfall causing flash floods in many provinces in the South.

Department of Disaster Prevention and Mitigation (DDPM) director-general Wibul Sanguanpong said the flood claimed 11 lives so far. Thousands of passengers including tourists were stranded at Koh Samui Airport and Nakhon Si Thammarat Airport as both airports remained closed temporarily since Monday. The first flight from Bangkok to Koh Samui at 1.55pm Tuesday had to return to the capital as it failed to land at the island’s airport due to strong wind. The island, in Surat Thani province, was totally cut off as boat services too were suspended due to 3 metre-high waves. All south-bound trains have been suspended as the result of the flood, State Railways of Thailand announced Tuesday. 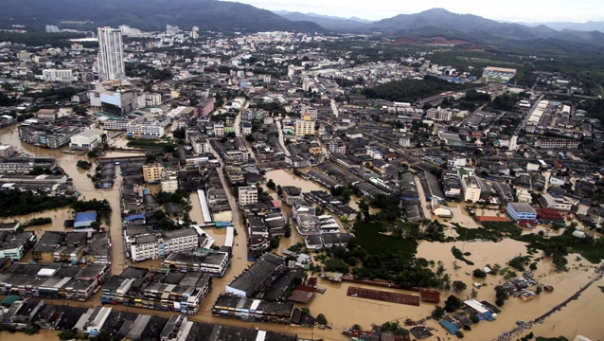 DDPM reports a total of 979,665 people from 2,763 villages were affected by the flood that hit southern Thailand since last Saturday. In another development, more than 2,000 cows were killed in Omkoi district, Chiangmai province since last week due to the cold weather. Omkoi District Office spokesman Terdsak Jaruakkara Sheriff said the district was experiencing a temperature of 7.5 degree Celcius currently.

Droughts and floods pose the greatest threat to Thailand, influencing the entire country in with varying degrees of risk. The entire country is severely impacted by floods when weighted by mortality and GDP whereas droughts only rank in the moderate to lower deciles. Cyclones also pose a minor risk to the northern portions of the country. The Multi-hazard Disaster Risk maps indicate that Thailand is significantly affected by hydrological and drought events, particularly in the central, eastern, and southern regions. 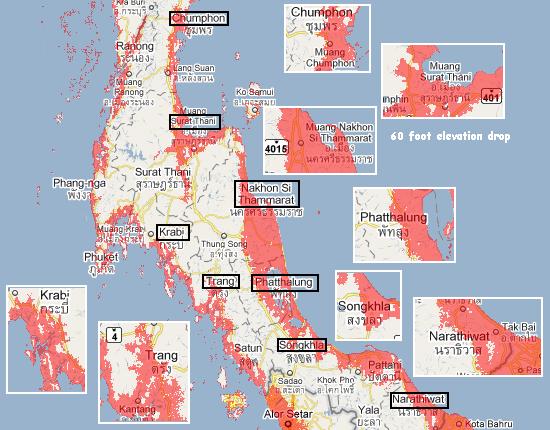 On this map we can notice that all flooded areas are coastal areas with maximum elevation up to 18 meters. No flooding around lakes or rivers, just areas reachable by the sea. Could this be an implication of sinking ground in Southern Thailand.

Thailand is located in Southeast Asia between latitudes 5o 37’ N and 20o 27’ N and longitudes 97o 22’ E and 105o 37’ E and cover area of 518,000 km2. It is bounded to the west by Myanmar, to the north by Myanmar and Laos, to the east by Laos and Cambodia, and to the south by Malaysia. Physiographical, the country can be divided into four regions; the mountainous highland in the north and northwest, the khorat plateau in the northeast, the central plain and the southern peninsular, which are between Andaman Sea and the Gulf of Thailand.

Thailand, tectonically consists of two major Gondwana derived terranes, namely Shan-Thai to the west, and Indochina to the east, that were amalgamated along Nan-Uttaradit suture during Late Triassic, although opinions on moving history vary. Different in their stratigraphies, particularly during Carboniferous to Triassic, strongly supported this interpretation. Indochina terrane drifted away from the Gondwana in Late Devonian, as suggested by radiolarian assemblages from chert in the suture zone. These were continuously followed by Carboniferous clastics and Permian platform carbonates exhibited Cathaysian affinity. While Shan-Thai terrane was adjacent to NW Australian part of the Gondwana till Early Permian, as evidenced by not only stratigraphic similarity from Cambrian to Early Permian but also close faunal affinities in particular during Cambrian to Devonian. Discovery of Devonian to Middle Triassic deep sea thin-bedded chert, and Cathaysian fauna in Carboniferous to Permian limestones in northern Thailand where formerly mapped as part of the Shan-Thai terrane, led to interpretation of major Paleotethys ocean with occurrence of seamount limestones in low latitude area. Occurrences of Lower Paleozoic clastics and fauna in the northern Thailand similar to those of Shan-Thai terrane suggest they were also derived-fragments of the Gondwana. Subsequently, new suture zones of the Paleotethys have also been proposed in Chiang Mai and Mae Sariang areas. However, westward subduction of the Indochina terrane beneath the Shan-Thai terrane along the Nan-Uttaradit suture is preferred. This interpretation is strongly supported not only by the presence of magmatic arc, Permian to Middle Triassic deep sea thin-bedded chert, Triassic forearc sediments and ophiolite rocks but also occurrences of syn- and post-subduction related plutonics.

Thailand has environmental issues regarding the air, water, and land. These include air pollution from vehicle emissions; water pollution from organic and factory wastes; land concerns with deforestation, and soil erosion. Thailand’s wildlife populations are also threatened by illegal hunting.