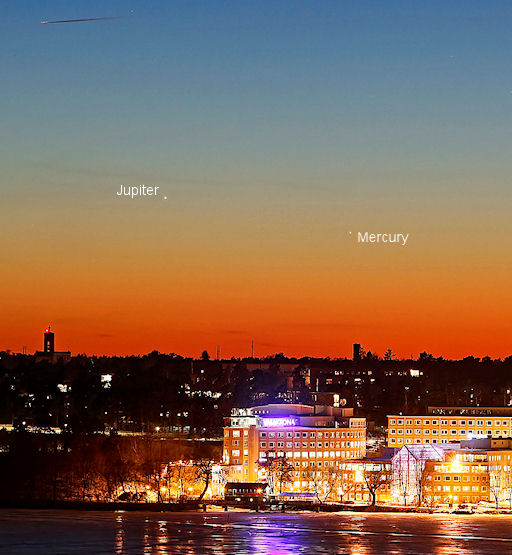 This week, sky watchers have a rare opportunity to see Mercury at its best as NASA’s MESSENGER probe prepares to enter orbit around the innermost planet. Look west at sunset: Mercury pops out of the evening twilight alongside Jupiter for a fantastic sky show.

Peter Rosén caught the two planets hovering together over Stockholm, Sweden, at the end of the day on March 14th:

Just as NASA’s MESSENGER probe is about to enter orbit around Mercury, the innermost planet is popping out of the twilight for its best apparition of 2011.

The show begins on March 14th. At the end of the day, go outside and look west into the sunset. A bright star catches your eye—that’s Jupiter. Just below it lies Mercury, a little dimmer than the giant planet, but easy to find with Jupiter’s guidance.

Over the next few evenings, these two planets will “pass in the night,” switching places so that Mercury is on top and Jupiter on the bottom. The higher Mercury rises, the easier it is to see. By the evening of March 17th, the innermost planet should be well above any distant trees or buildings—in prime position for the big event.

March 17th is the night MESSENGER goes into orbit.

This has been a long time coming. MESSENGER was launched in Aug. 2004. Since then it has looped around the sun 15 times, flown by three planets for multiple gravity assists, and traveled some 5 billion miles. If getting there sounds tricky, that’s because it is. Mercury races around the sun faster than 100,000 mph, making it difficult to catch. Moreover, a spacecraft at Mercury has to endure terrific heat and dangerous solar flares. In the whole history of the space age, only two ships have dared fly by the planet—Mariner 10 in 1974-75 and MESSENGER itself in 2008-2009. 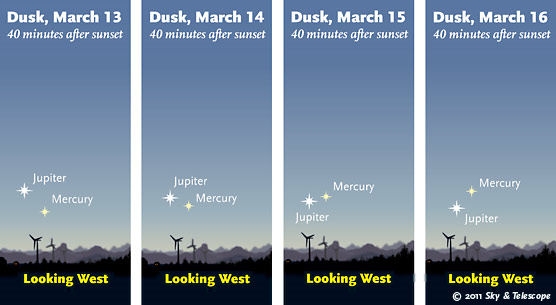 Deep mysteries await MESSENGER when it arrives. There are hints that Mercury has been shrinking—how is that possible? The poles of Mercury contain some highly reflective material—could it be ice? What shapes Mercury’s long comet-like tail? What makes Mercury so dense? Are any of Mercury’s volcanic craters “fresh”? MESSENGER is bristling with instruments specifically designed to answer these questions and many others.

A 15-minute engine burn on March 17th at 8:45 p.m. EDT will place MESSENGER into orbit. At that historic moment, Mercury will be visible to the naked eye across much of the USA. Go out and look. Only MESSENGER will have a better view…