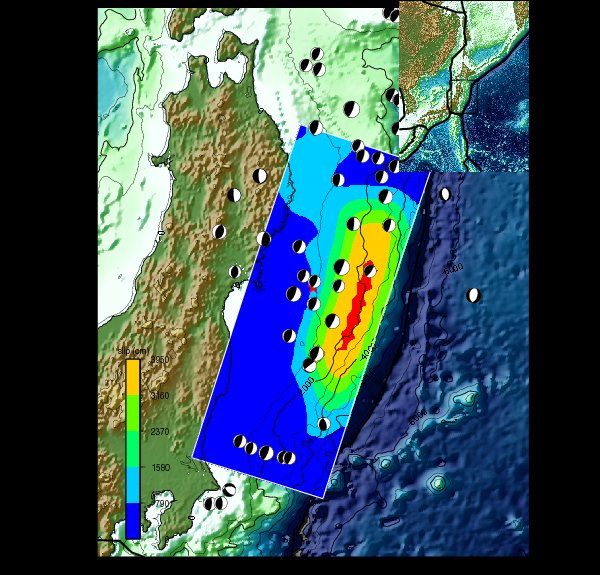 The latest figures on the earthquake that struck Japan on Friday suggest that, despite all the headlines, it was actually surprisingly small.

That is, the area of fault that ruptured was small – somewhere between 300 and 400 kilometres long. By comparison, the magnitude 9.1 Sumatra earthquake in 2004 broke along an area of fault 1300 km long.

How then, did today’s quake get so powerful? What the fault lacked in size, it made up for when the two adjoining tectonic plates slipped a whopping 40 metres. This calculation comes from Chen Ji of the University of California, Santa Barbara (in the figure below, red colouring indicates areas of 40 metres’ slip).

To arrive at this astounding figure, he downloaded information about when seismic waves arrived at listening stations around the world, and then reverse-engineered the data – earthquake geeks call it an inversion – to see where along the fault the seismic energy was generated.

It’s early days, and Ji stresses that his work is preliminary. But his calculations suggest that an area of fault between 300 and 400 kilometres long by 100 kilometres wide slipped some 40 metres. The US Geological Survey puts their estimate closer to 20 metres. Consider those upper and lower boundaries on where the final figure will likely fall. 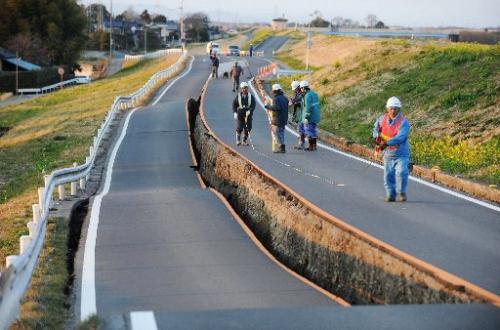 Either way, it’s apparent that this is one of the largest fault movements the world has ever seen.  And it has implications for future quakes in the region as well, as the stress released during the quake is likely to have transferred to other faults nearby.

“There is no doubt this quake increased stress conditions and the potential for the fault to break both to the south and north of this event. It could be a few months, or it could be a few years.”

Once Japan and its researchers are back on their feet, data from the country’s thousands of seismic monitors will emerge that will provide a look in unprecedented detail at how the quake that spawned this disaster unfolded. (NewScientist)