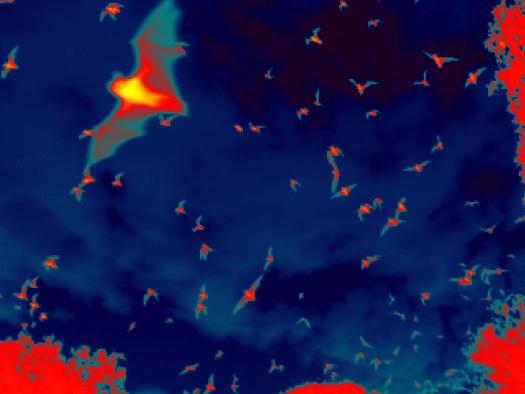 Using cutting-edge technology such as radar that can spot a bee dozens of miles away, scientists are exploring a vast frontier that may look like mostly empty space but is teeming with life: the “aerosphere.”

The aerosphere is the layer of the atmosphere closest to the surface that supports airborne life. A dazzling array of creatures, including birds, bugs and bats, spends a significant part of its lives aloft in an environment more variable and dynamic than either land or sea.

The behavior of flying creatures influences not only terrestrial and aquatic ecosystems but farms, since flying creatures are vital for pollination and pest control. Yet many of the details of airborne life have eluded scientists.

Through incredibly sensitive weather radar, heat-vision cameras and miniature transmitters, the mysterious habits of these creatures are now coming to light, scientists revealed at the annual meeting of the American Association for the Advancement of Science.

“I can tell you that weather radar right now is very, very, very sensitive,” said researcher Phillip Chilson, a meteorologist at the University of Oklahoma. “We can detect a single bumblebee at a distance of 50 or 60 kilometers,” or 31 to 37 miles.

“We already have well-developed networks of radar around the world used for tracking weather and airplanes,” Chilson added. “There are as many as 510 government-owned and -maintained radar networks in the United States, and for weather radar, about 156. We have this wonderful tool we can use for exploring biology without much additional outlay of expenditures.”

Scientists have not only the latest readings from these radar networks to analyze, but also atmospheric data recorded every five minutes for the past 20 years. With that data, “you can start to see broad-scale migratory patterns on a continental scale,” said ecologist Winifred Frick at the University of California, Santa Cruz.

In this manner, one can try to estimate how many creatures actually live in the aerosphere. “That’s a question that many subsequent questions depend on,” said Thomas Kunz, director of the center for ecology and conservation biology at Boston University.

For learning about the actions of lone creatures (as opposed to entire flocks), researchers now have miniature transmitters that weigh less than a dime, Kunz said. Thermal imaging has enabled scientists to film and reconstruct the three-dimensional trajectories of bats in pursuit of moths, research of high interest to the military.

“How animals such as bats and birds move in cluttered environments is something the Air Force is quite interested in, and the Navy,” Kunz said. “They’re interested in developing unmanned aircraft inspired by wildlife — birds and bats and insects that, after millions of years of evolution, can avoid colliding with forests and trees.”

Many challenges remain in “aeroecology,” the field studying the ecology of the aerosphere. For instance, one cannot tell what species a flock might be just from standard radar.

A new development that could address this limitation is “dual polarimetric radar,” with which one can tell both vertical and horizontal data, providing more clues to the species. It also can distinguish between interacting swarms of creatures, such as predatory bats and their insect prey.

“This is work that’s important in terms of both ecosystem health and in terms of public health, something that new technology is helping us gain information about,” Kunz said. (OurAmazingPlanet)