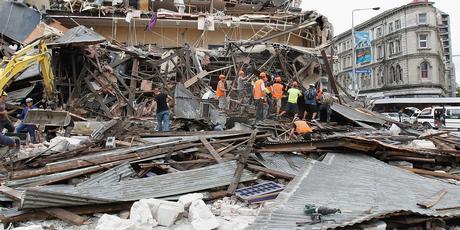 Local TV showed bodies being pulled out of rubble strewn around the city center, though it was unclear whether any of them were alive, but police reported multiple fatalities after the 6.3 magnitude quake struck during the busy lunchtime.

Christchurch is built on silt, sand and gravel, with a water table under it. In an earthquake, the water rises, mixing with sand. Unlike last year’s even stronger tremor, which struck early in the morning when streets were virtually empty, the streets, shops and offices in the city of almost 400,000 were thronged with people when the shallow tremor struck.

It hit at 12:51 pm (2351 GMT Monday) at a depth of only 4 km (2.5 miles), according to the U.S. Geological Survey’s Web site.  The tremor was centered about 10 km (six miles) southwest of Christchurch, which had suffered widespread damage during last September’s 7.1 magnitude quake but no deaths.

The region has been struck by thousands of aftershocks since the original quake.

New Zealand, which sits between the Pacific and Indo-Australian tectonic plates, records on average more than 14,000 earthquakes a year, of which about 20 would normally top magnitude 5.0.

New Zealand sits on the so-called “Ring of Fire”, the boundary of the Australian and Pacific tectonic plates, and experiences up to 15,000 tremors a year. It averages at least one a day of magnitude 4.0 or stronger.

Earthquake causes ice to break off glacier
The earthquake that struck Christchurch has caused some 30 million tons of ice to break off from New Zealand’s biggest glacier. Tour guides at the Tasman Glacier in the Southern Alps say the quake caused the ice to “calve” from the glacier, forming icebergs in the terminal lake. Tourists of Glacier Explorer boats say the icefall caused waves of up to 3.5 meters in height which swept up and down the lake for 30 minutes.

The glacier is about 120 miles (200 kilometers) from Christchurch on the west coast.

Here are somer historic recorded earthquakes in the country:

8.2 – January 23, 1855. Centred in the lower North Island and the most severe quake in New Zealand since European colonisation began in 1840. Thought to have killed seven to nine people.