Hawaiian Kilauea volcano continues erupting since December 20, 2021, with lava activity confined to the Halemaʻumaʻu crater. On April 15, the lava lake was 227 m (745 feet) deep and remains stagnant over its eastern half. SO2 emission rates remain elevated at 950 tonnes per day, last measured on April 14.

The most recent sulfur dioxide emission rate, measured on April 14, was 950 tonnes per day.

This is elevated compared to rates in the months before the eruption started on December 20 (less than 100 tonnes per day), but lower than emission rates from the pre-2018 lava lake (around 5 000 tonnes per day), the Hawaiian Volcano Observatory (HVO) reported on April 15. 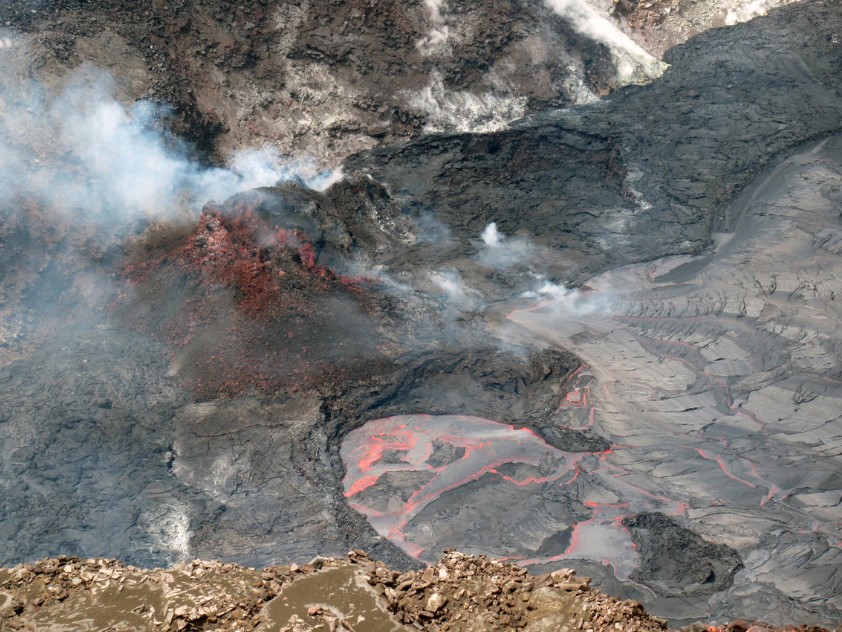 A close-up view of the western fissure within Halema‘uma‘u at the summit of Kīlauea Volcano, Island of Hawai‘i. Lava continues to enter the lava lake from a wide inlet near the base of the western vent (fuming at center right). Crustal foundering is common on the active lava lake surface (center bottom), located on the western side of the crater. This photograph was taken on April 14, 2021 from the south rim of Halema‘uma‘u, an area within Hawai‘i Volcanoes National Park that remains closed to the public due to safety reasons. USGS photo by J.M. Chang.

No unusual activity was observed in the East Rift Zone.

Geodetic monitors indicate that the summit and upper East Rift Zone – between the summit and Puʻuʻōʻō – is refilling at rates similar to those measured over the past 2 years and before the December 2020 eruption. SO2 and H2S emissions from Puʻuʻōʻō were below instrumental detection levels when last measured on January 7.

Lava effusion from the west vent continues to supply the lava lake within the Halema‘uma‘u crater. The west vent is consistently effusing lava at a low rate through a crusted-over channel and submerged inlet to the lake.

Lava circulation and intermittent foundering of crust continue in the western portion of the lava lake, with lava oozing out sporadically in areas along the perimeter of the lake. 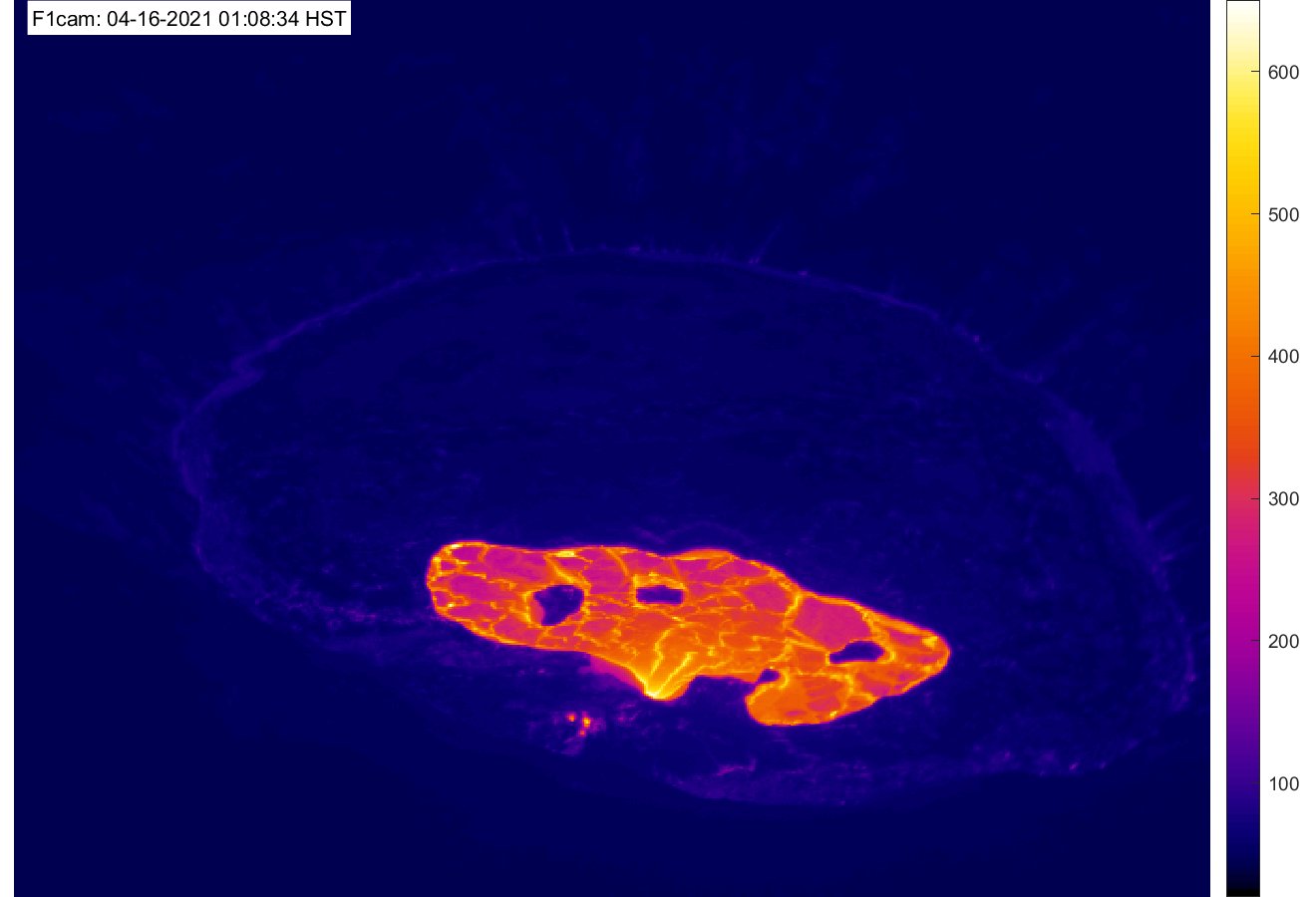 Stagnant and solidified lava crust covers the eastern portion of the lava lake and is slowly growing westward.

​Graph showing the depth of the Halema‘uma‘u crater lava lake at Kīlauea Volcano's summit. Measurements began one day after the start of the eruption on December 20, 2020 and are updated by geologists making observations from the field. HVO field crews use a portable laser range finder to measure the vertical distance between points of known elevation and the lava lake surface. Frequent sets of repeat manual measurements were averaged and plotted to derive the lava lake depth. On January 8, 2021, a novel laser rangefinder was stationed at Kīlauea Volcano's summit. The fixed instrument continuously measures the distance to the lava lake surface, and telemeters data to HVO in real time. The raw data has been edited for this graph, with a running mean average filter of 3600 seconds. Variations in plotted depth can occur due to alternating field crews, the uneven surface of the lava lake, or laser rangefinder returns on gas rather than the lake surface.

High levels of volcanic gas are the primary hazard of concern regarding the ongoing activity at Kīlauea’s summit, with additional hazards from crater wall instability and rockfalls.

As SO2 is released from the summit, it will react in the atmosphere to create the visible haze known as vog (volcanic smog) that has been observed downwind of Kīlauea. Vog creates the potential for airborne health hazards to residents and visitors, damages agricultural crops and other plants, and affects livestock.

The unstable nature of the crater rim is a hazard surrounding Halemaʻumaʻu crater, an area that has been closed to the public since early 2008.

Pele's hair and other lightweight volcanic glass fragments from the lava fountains within Halemaʻumaʻu will fall downwind of the fissure vents and lava lake, dusting the ground within a few hundred meters (yards) of the vent.

Strong winds may waft lighter particles to greater distances. Residents should minimize exposure to these volcanic particles, which can cause skin and eye irritation similar to volcanic ash. 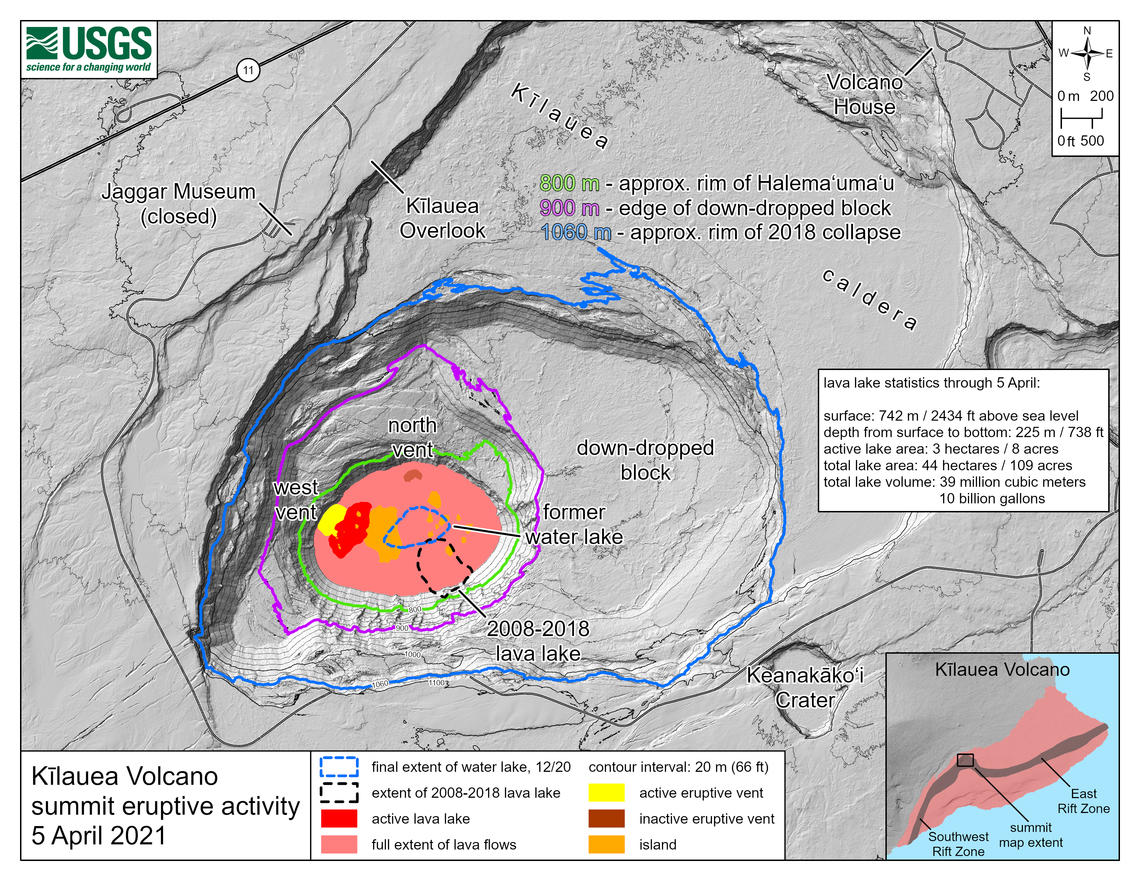 This map of Halema‘uma‘u at the summit of Kīlauea shows 20 m (66 feet) contour lines (dark gray) that mark locations of equal elevation above sea level (asl). The map shows that the lava lake has filled 225 m (738 feet) of the crater, to an elevation of 742 m (2 434 feet) asl since the eruption began on December 20, 2020. Contour lines highlighted in green, purple, and blue mark the approximate rim of Halema‘uma‘u, the edge of the eastern down-dropped block, and the approximate rim of the 2018 collapse, respectively. Lava is expected to be within view of the Kīlauea Overlook visitor area shortly before it rises to the level of the green contour line at 800 m (2 625 feet) a.s.l. Credit: USGS/HVO

The 3 x 5 km (1.9 x 3.1 miles) caldera was formed in several stages about 1 500 years ago and during the 18th century; eruptions have also originated from the lengthy East and SW rift zones, which extend to the sea on both sides of the volcano.

A long-term eruption from the East rift zone that began in 1983 has produced lava flows covering more than 100 km2 (37 miles2), destroying nearly 200 houses and adding new coastline to the island. (GVP)