A major winter storm described by the National Weather Service (NWS) as "historic and crippling" lashed parts of the U.S., bringing up to 1.2 m (4 feet) of snow over the weekend. More than 2 000 flights were canceled and over 54 000 customers were left without power on Sunday, March 14, 2021.

The NWS initially warned of a "historic and crippling" winter storm that will significantly impact all of southeast Wyoming and western Nebraska panhandle, adding that "widespread blizzard conditions" would make travel "dangerous or impossible." 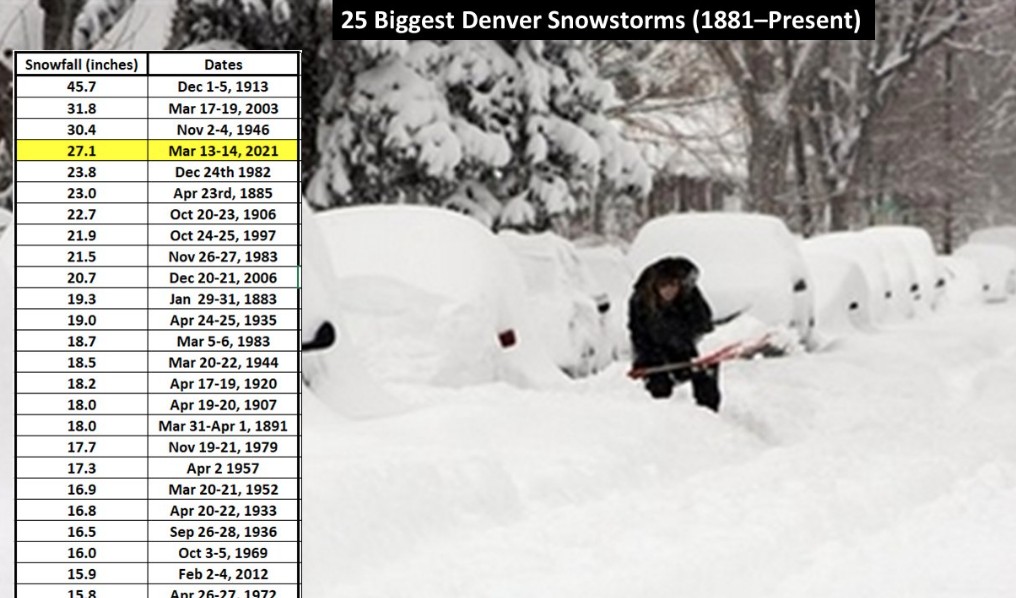 As of Sunday afternoon, more than 54 000 customers were without power in northern Colorado counties, including the Denver metro area.

It knocked out power to tens of thousands of people, stranded motorists on roads, shut down major roadways and prompted closures of many schools and government offices on Monday, March 15.

The Denver International Airport canceled some 2 000 flights due to difficulties involving airport personnel in getting into work because of the severe weather.

Blizzard conditions continue at the airport. Airlines have ceased operations at DEN for the rest of the day. Peña Blvd is currently impassable with multiple disabled vehicles along the roadways, if you absolutely must come to the airport, please use the @RideRTD A-Line instead pic.twitter.com/uEnXERcDDd

5 AM 3/15 – The main part of the storm has passed, but we still have chances for snow across SE WY & W NE today-Tues morn. 1-2" expected (3" possible @ higher elevations). Travel across WY & NE will still be dangerous as the roads are slick & snow-covered! #WYwx #NEwx #wyoroad pic.twitter.com/hgIhHXNB1X

The drifts are really high in some areas. For your safety, please stay home. pic.twitter.com/RhquexDqG6

A powerful winter storm pummeled parts of the U.S. Rockies and western plains, forcing the cancellation of hundreds of flights in Denver and shutting down major highways https://t.co/IzvaY28amT pic.twitter.com/mI1rZJM6Ue

"This has definitely been a historic storm," said Alan Reppert, senior meteorologist with AccuWeather. "Definitely something that we can thankfully look at as a very rare occurrence."

In Wyoming, the storm brought wind gusts of up to 88 km/h (55 mph) and heavy snow, closing several parts of I-80 and 8-25. Officials reported that snowplows and emergency vehicles were being hemmed by strong winds and drifts.

United Airlines suspended all weekend flights out of Cheyenne Regional Airport, where more than 53 cm (21 cm) of snow was reported.

Travelers were stranded for hours on I-40 in Arizona after parts of the road were closed due to several crashes.  In Nebraska, I-80 westbound was shut at North Platte exits 177 and 179.

Blizzard remnants shift away from the Rockies

"A large and energetic low pressure system enveloping the mid-section of the country is showing signs of winding down after delivering one to two feet of snow to the central High Plains with higher amounts along the Front Range," NWS forecaster Kong noted.

Blizzard conditions in parts of the area have since subsided as the storm center slowly makes its way eastward into the central Plains. Nevertheless, a band of moderate snow with some mixed precipitation is moving across the Midwest and should reach the upper Midwest and lower Michigan by tonight.

Some mixed precipitation should also move into the central Appalachians tonight well ahead of the weakening system.

Areas of heavy snow are also expected in northern California and southeast Alaska.