Multiple winter storms will impact much of the U.S. with winter weather over the next few days, the National Weather Service (NWS) warns.

Multiple systems across the United States are producing impactful precipitation and will continue to do so over the next few days, NWS forecaster Campbell said.

The leading low pressure system is lifting through the Mississippi and Tennessee Valleys. Lines of thunderstorms are tracking ahead of the cold front within the warm sector over the Gulf states, Tennessee Valley, and parts of the Southeast and southern Mid-Atlantic.

Periods of moderate to heavy rainfall may lead to excessive rainfall and/or localized flash flooding conditions for parts of the eastern Tennessee Valley and Central Appalachians through Tuesday morning (LT), January 26. 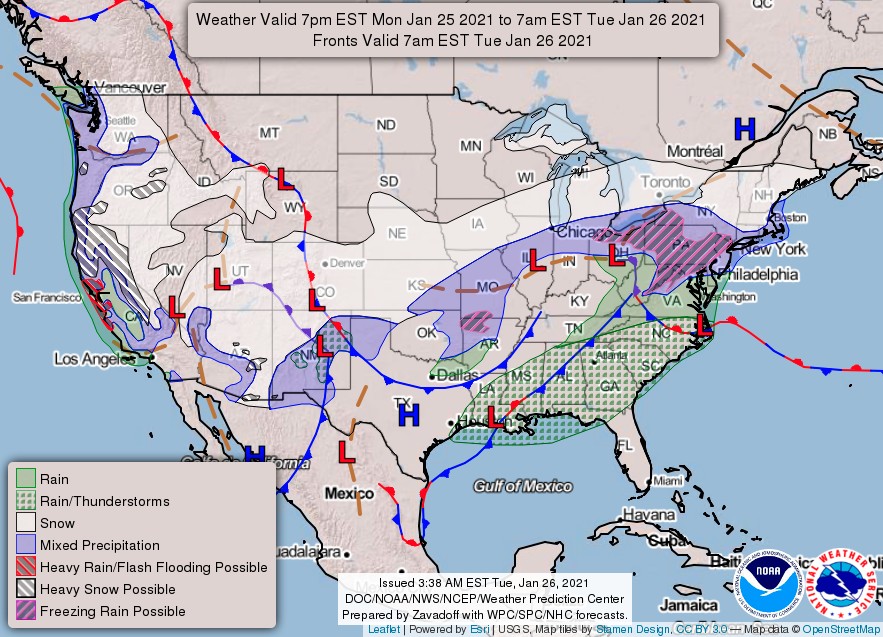 Freezing rain/sleet may be present from northern Missouri to the northern Mid-Atlantic/southern Northeast and lead to accumulations of up to 13 mm (0.50 inches).

Snow is expected on the northern periphery of the precipitation shield over the Ohio Valley, Great Lakes, and Northeast.

This system will continue moving east through Wednesday, January 27 before moving offshore.

Over 30 cm (1 foot) of snow could fall across southeast Nebraska and southwest Iowa, this includes Lincoln and Omaha, Nebraska.

Numerous Winter Weather Advisories and Winter Storm Warnings have been issued for the impacted regions.

Scattered to widespread snow is falling across parts of Arizona, Utah, and parts of the Southwest as a low pressure system tracks through the Great Basin.

The higher elevations will likely have heavy snow with this system, possibly yielding a foot or more of accumulations. Travel through this part of the country may be hazardous.

Light snow can be expected from the central Plains to the lower Ohio Valley. Moderate snowfall amounts up to 150 mm (6 inches) will be possible Wednesday night, January 27 across the southern Appalachians. 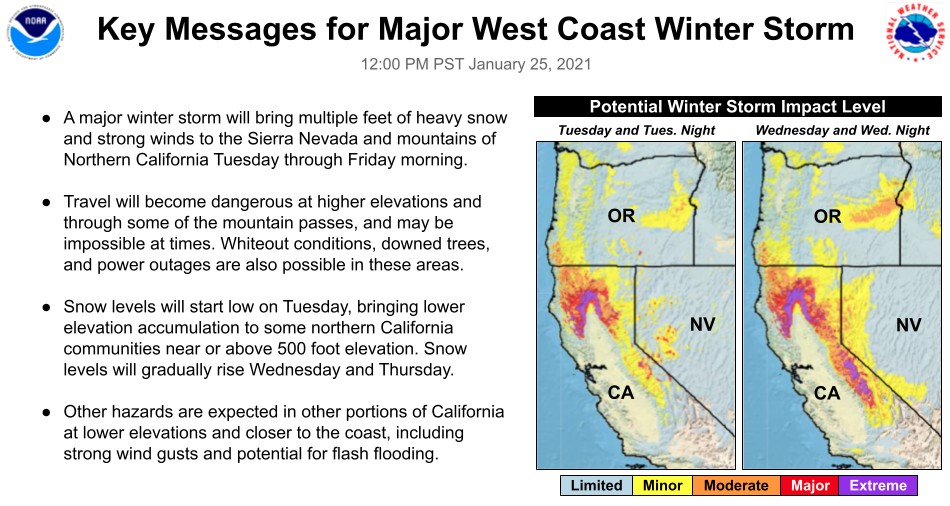 A robust low pressure system will push onshore California by Tuesday night and will usher in gusty winds, heavy rain for coastal and lower elevation areas, and mountain snow on Wednesday.

Snow levels across northern California are forecast to start as low as 150 to 760 m (500 to 2500 feet), before slowly rising Wednesday.

With several inches of rainfall expected across parts of central and southern California, WPC has identified a Moderate Risk area for excessive rainfall and debris flows from nearby burn scars will be a concern on Wednesday along the central California coastline as upwards of 180 to 250 mm (7 to 10 inches) of rain could fall.

Higher up in elevation, whiteout conditions due to extremely heavy snowfall rates are possible across the Sierra Nevada. Several feet of snow will add up through Wednesday night, with road closures and travel delays likely.