Favorable conditions prompted numerous tornado warnings, with two tornadoes touching down and causing damage– the first in Bald Head Island, while the other near Windsor. Another intense and destructive tornado hit near Chowan University.

As the storm neared the shore of Myrtle Beach, a gauge recorded its third-highest tide since it was set up in 1976. Notably, only hurricanes Hugo in 1989 and Matthew in 2016 generated more saltwater inland.

As of 09:00 UTC (05:00 LT) on Tuesday, Isaias weakened into a tropical storm, packing maximum sustained winds of 113 km/h (70 mph) with its center located near southeast Virginia.

– Pamlico and Albemarle Sounds, including the Neuse and Pamlico Rivers

A Tropical Storm Warning is in effect for

"The cyclone is forecast to continue accelerating north-northeastward today as it is embedded in the strong south-southwesterly flow ahead of a deep-layer trough over the Great Lakes region," the National Hurricane Center (NHC) reported.

In 24 hours, the post-tropical cyclone is forecast to decelerate before it is absorbed by the extratropical low.

"In addition to the storm surge and wind threats, Isaias is expected to produce heavy rainfall along and just west of the I-95 corridor today, and the Weather Prediction Center has placed a portion of this area is a high risk for life-threatening flash flooding." 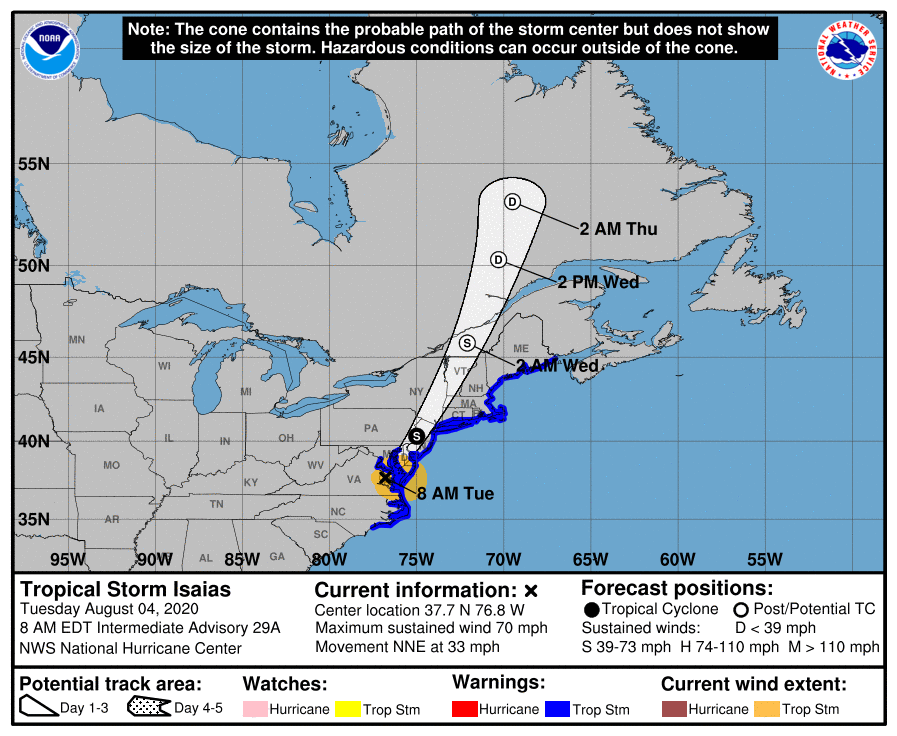 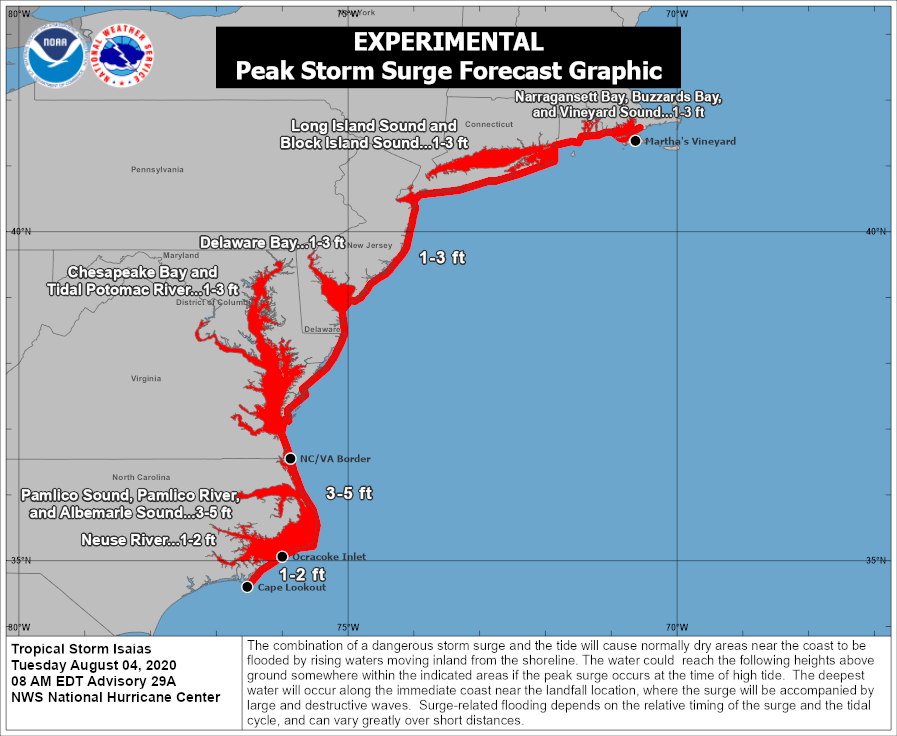 According to Philip Klotzbach, a meteorologist at CSU specializing in Atlantic basin seasonal hurricane forecasts, Isaias made landfall in North Carolina just over nine days following Hanna in Texas.

Isaias is the 12th hurricane to make landfall in North Carolina in August since 1851. NC is now in third place for most hurricanes in any U.S. state during August, breaking a tie with Louisiana.

Florida holds the most hurricane landfalls in August with 23, followed by Texas with 17.

It was also the first hurricane to make landfall in North Carolina in August since Irene in 2011.

#Isaias is the 12th #hurricane to make landfall in North Carolina in August on record (since 1851). North Carolina is now in 3rd place for most hurricanes in any US state during August, breaking a tie with Louisiana. Florida has most August landfalls (23), followed by Texas (17) pic.twitter.com/RA2Mn7IbIp

There is the danger of life-threatening storm surge inundation along portions of the immediate coastline and adjacent waterways of the North Carolina coast, including portions of Pamlico and Albemarle Sounds. Residents in these areas should follow the advice given by local emergency officials.

Isaias is expected to bring widespread sustained tropical storm force winds and wind gusts to hurricane force to the mid-Atlantic coast, including portions of the Chesapeake Bay region, through this afternoon, which could cause tree damage and power outages. Tropical storm conditions are expected to spread across New England tonight.

Heavy rainfall along the East Coast, near the path of Isaias, will result in flash flooding, some of which may be significant in North Carolina through the Mid-Atlantic and Northeast through tonight. Potentially life-threatening urban flooding is possible in D.C., Baltimore, and elsewhere along and just west of the I-95 corridor today. Widespread minor to moderate river flooding is likely across portions of the Carolinas and the Mid-Atlantic. Quick-responding rivers in the Northeast will also be susceptible to minor river flooding.

Tornadoes have already occurred over portions of northeastern North Carolina and southeastern Virginia overnight. The threat of tornadoes will spread northward along the mid-Atlantic coast today and then across New England by tonight.