What was once Tropical Storm "Amanda" — the first named storm of the 2020 Pacific hurricane season — emerged in the Bay of Campeche and strengthened into a Tropical Depression Three at 21:00 UTC on June 1, 2020. The depression is expected to bring heavy rainfall to portions of southern Mexico, Guatemala, Honduras and El Salvador, which could cause life-threatening flash flooding and mudslides. Tropical storm conditions are expected along the coast of Mexico where a tropical storm warning is in effect. The system is forecast to begin moving northward across the Gulf of Mexico later this week. However, it is too soon to specify the location and timing of any potential impacts along the U.S. Gulf Coast. Interests in these areas should monitor the progress of this system through the week and ensure they have their hurricane plan in place as we begin the season.

On the forecast track, the center of the cyclone is forecast to be near the coast of the southern Bay of Campeche Tuesday night through Thursday, June 2 – 4.

Gradual strengthening is expected during the next couple of days and the depression is forecast to become a tropical storm later today — named Cristobal, the third named storm of the 2020 Atlantic hurricane season. 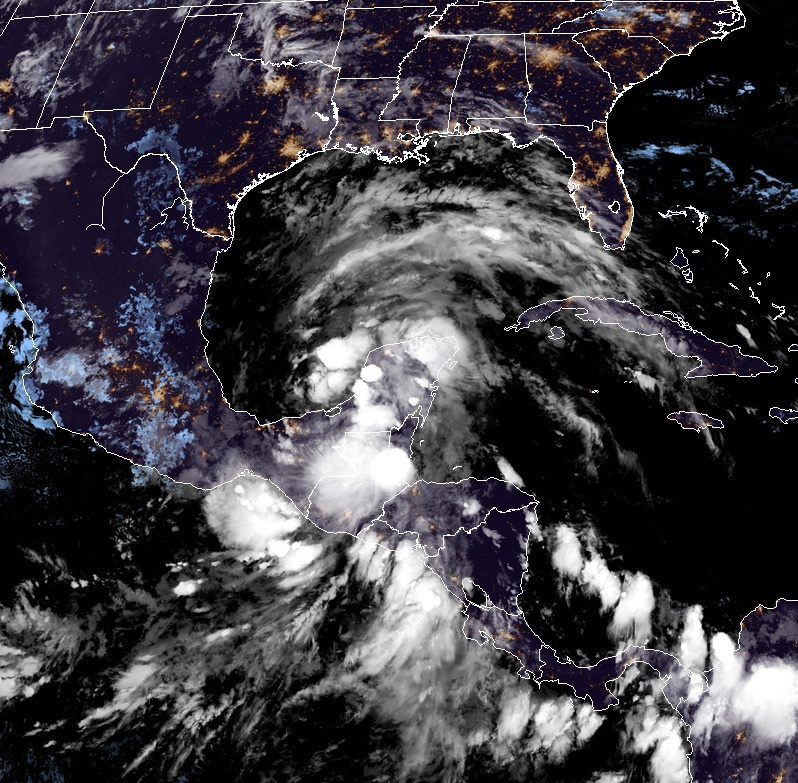 Satellite imagery, along with radar and surface data from Mexico, indicate that the depression has changed little in organization or strength since the previous advisory, NHC said at 03:00 UTC on June 2.

There are a couple of small clusters of convection near the center, while the more concentrated convection is occurring in ragged bands well removed from the center.

The evolution of this system during the next several days remains quite uncertain, the center said.

The Canadian and UKMET models forecast the cyclone to make a slow counter-clockwise loop inside a larger gyre over Central America during the next 2 – 3 days, with the center moving near the coast of the Bay of Campeche.

This would be followed by a more northward motion with some increase in forward speed as a mid-/upper-level trough develops over the northern Gulf of Mexico.

On the other hand, the GFS and ECMWF show the depression turning southward and making landfall over the coast of Mexico in the next 24 – 36 h, followed by dissipation.

These two models subsequently develop a second low pressure area northwest of the Yucatan Peninsula on June 7 due to the interaction of the aforementioned gyre and trough.

The new forecast track follows the previous forecast in showing TD-3 as being the system that moves northward across the Gulf. 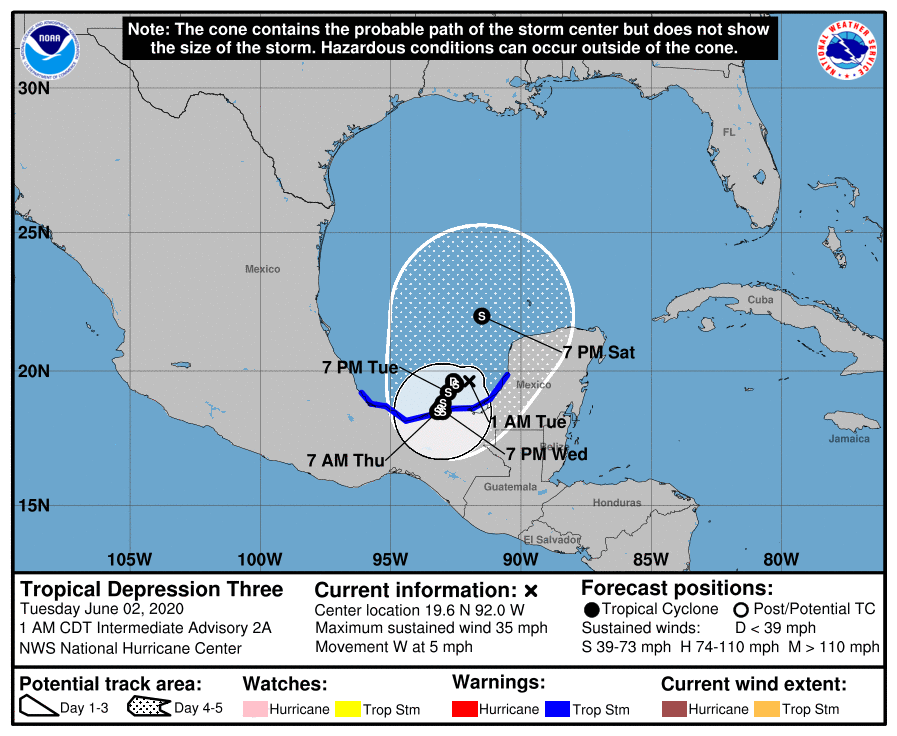 However, the new track brings the center closer to the coast of Mexico and is slower to move it northward than in the previous advisory.

It should be noted, though, that in 5 days there could be a cyclone near the forecast point that is not actually TD-3. In the current track forecast scenario, slow strengthening should occur during the next 24 – 48 h while the cyclone moves over the warm water of the Bay of Campeche in an environment of light to moderate shear.

After time, proximity to the Mexican coast should limit strengthening, and it is possible that the current forecast intensities could be generous.

The more northward motion near the end of the forecast period is likely to be accompanied by an increase in southerly shear, so only modest intensification is forecast during that time.

An alternative intensity forecast scenario is that the cyclone moves far enough inland over Mexico to dissipate completely in less than 5 days as forecast by the GFS and ECMWF.

Given the complexity of the situation, both the track and intensity forecasts are currently low confidence.  However, either of the current scenarios will result in widespread heavy rains over portions of southern Mexico and Central America.