Sernageomin has raised the Alert Level for Villarrica volcano to Orange on September 9, 2019 and shared evacuation maps showing different meeting points for each nearby community before a possible eruption. The last major eruption at Villarica took place in 2015.

The decision to raise the alerd was made due to increased seismicity and a more turbulent lava lake.

An exclusion zone of 2 km (1.2 miles) around the crater was put in place. 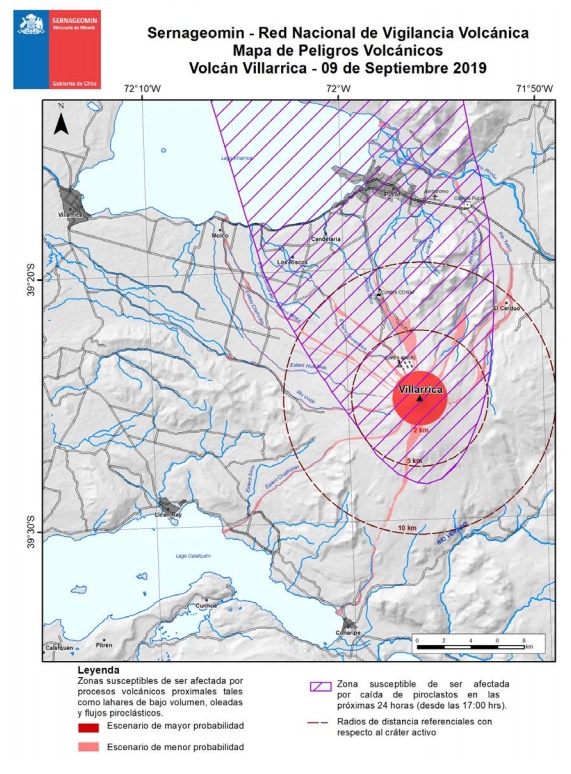 Seismicity under the volcano started increasing at 03:30 UTC on September 8, with 40 LP events per hour. While meteorological clouds prevented direct observation of the crater, other signals registered by 13:30 UTC suggested the presence of lava near the surface and minor explosions around the crater.

Sernageomin said September 9 there is a high probability that volcanic material can be ejected up to 2 km (1.2 miles) around the crater, more than was recorded in July 2019 when they reached up to 200 m (656 feet) from the edge of the crater.

Officials are considering a scenario similar to the eruption of 2015 – an explosive eruptive process of moderate magnitude, associated with untimely increase in the activity. In this condition, occurrence of explosions of greater energy and volume, in which fragments could accumulate around the crater, is possible. Low to moderate volume lahars are also expected in rivers and / or streams around the volcano.

Clouds are still preventing direct observation of the crater on September 10.

The current situation could evolve into a major eruptive event or end with no eruption at all, Sernageomin said. 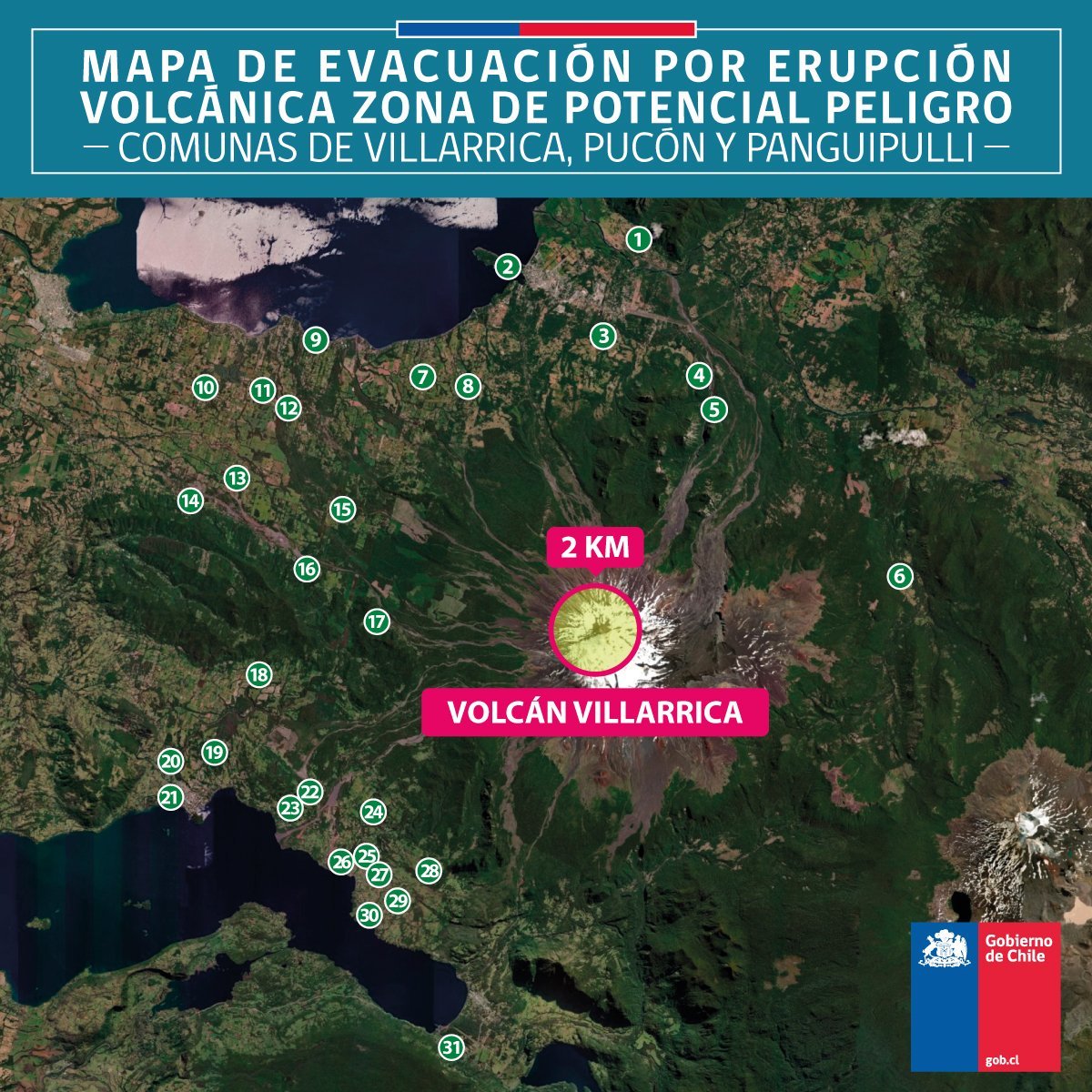 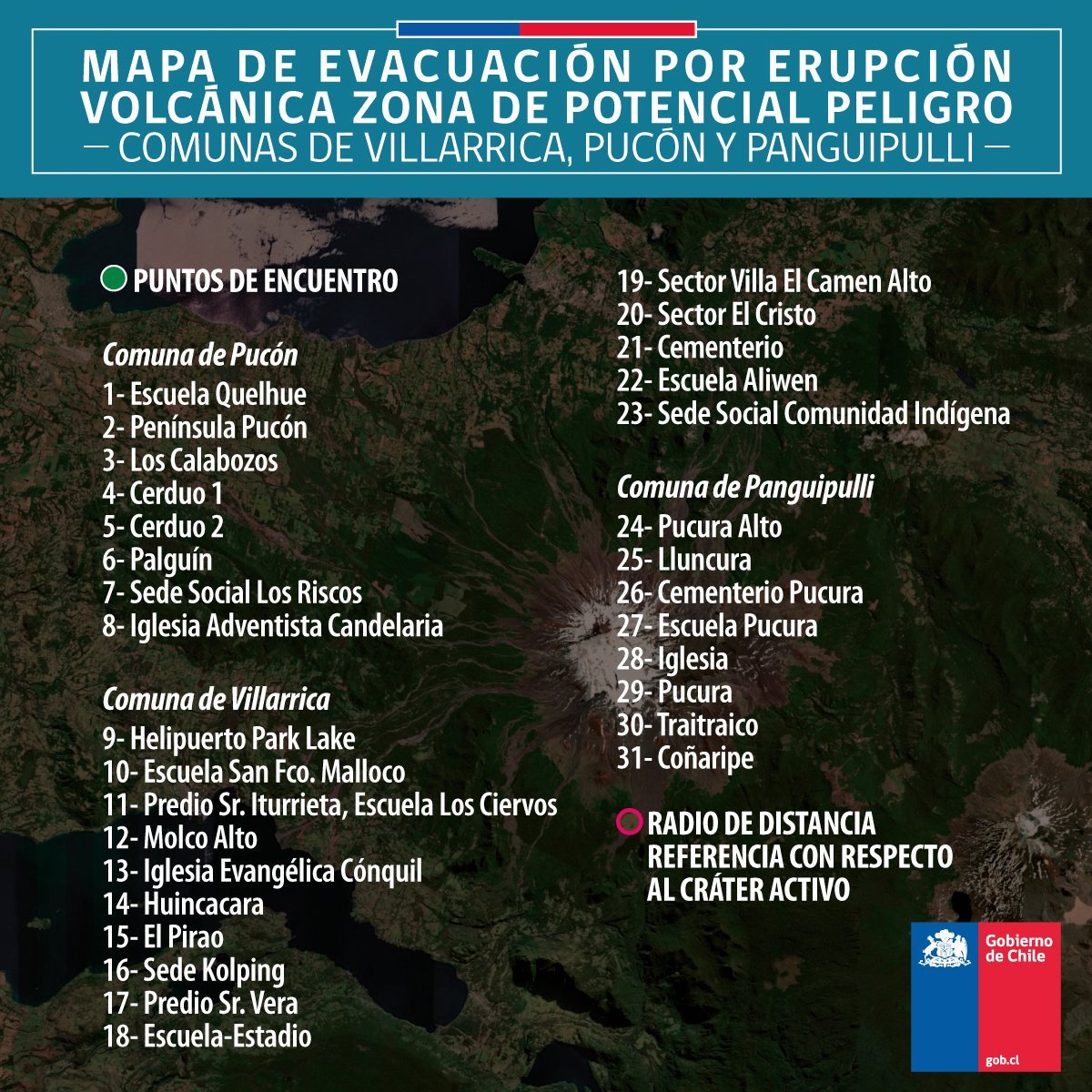 The last major eruption at Villarica took place in 2015.

Increased seismicity, crater incandescence and explosions increased at the volcano on February 6, 2015, leading to intense and continuous strombolian activity at the beginning of March. This was followed by ejection of a large volume of material, 1.5 km (0.93 miles) tall lava fountains and large lava flows. The eruptive plume rose up to 8 km (26 250 feet) above the crater and drifted 400 km (250 miles) ENE. The Alert Level was raised to Red (the highest level on a four-color scale).

The exclusion zone around to volcano was reduced to 5 km (3.1 miles) on March 4. The Alert Level was lowered to Orange on March 6 and to Yellow on June 8.

Glacier-clad Villarrica, one of Chile's most active volcanoes, rises above the lake and town of the same name. It is the westernmost of three large stratovolcanoes that trend perpendicular to the Andean chain.

A 6-km-wide (3.7 miles) caldera formed during the late Pleistocene. A 2-km-wide (1.24 miles) caldera that formed about 3 500 years ago is located at the base of the presently active, dominantly basaltic to basaltic-andesitic cone at the NW margin of the Pleistocene caldera.

More than 30 scoria cones and fissure vents dot the flanks. Plinian eruptions and pyroclastic flows that have extended up to 20 km (12.4 miles) from the volcano were produced during the Holocene.

Lava flows up to 18 km (11.2 miles) long have issued from summit and flank vents.

Historical eruptions, documented since 1558, have consisted largely of mild-to-moderate explosive activity with occasional lava effusion. Glaciers cover 40 km2 (15.4 mi2) of the volcano, and lahars have damaged towns on its flanks. (GVP)