Scientists charged with predicting the Sun’s activity for the next 11-year solar cycle say that it’s likely to be weak, much like the current one – Solar Cycle 24. The current cycle is declining and predicted to reach solar minimum late in 2019 or 2020. The next peak activity is expected between 2023 and 2026.

Solar Cycle 25 Prediction Panel experts said Solar Cycle 25 may have a slow start, but is anticipated to peak with solar maximum occurring between 2023 and 2026, and a sunspot range of 95 to 130. This is well below the average number of sunspots, which typically ranges from 140 to 220 sunspots per solar cycle.

However, the panel has high confidence that the coming cycle should break the trend of weakening solar activity seen over the past four cycles.

"We expect Solar Cycle 25 will be very similar to Cycle 24: another fairly weak cycle, preceded by a long, deep minimum," said panel co-chair Lisa Upton, Ph.D., solar physicist with Space Systems Research Corp. "The expectation that Cycle 25 will be comparable in size to Cycle 24 means that the steady decline in solar cycle amplitude, seen from cycles 21 – 24, has come to an end and that there is no indication that we are currently approaching a Maunder-type minimum in solar activity."

The solar cycle prediction gives a rough idea of the frequency of space weather storms of all types, from radio blackouts to geomagnetic storms and solar radiation storms. It is used by many industries to gauge the potential impact of space weather in the coming years. Space weather can affect power grids, critical military, airline, and shipping communications, satellites and Global Positioning System (GPS) signals, and can even threaten astronauts by exposure to harmful radiation doses. 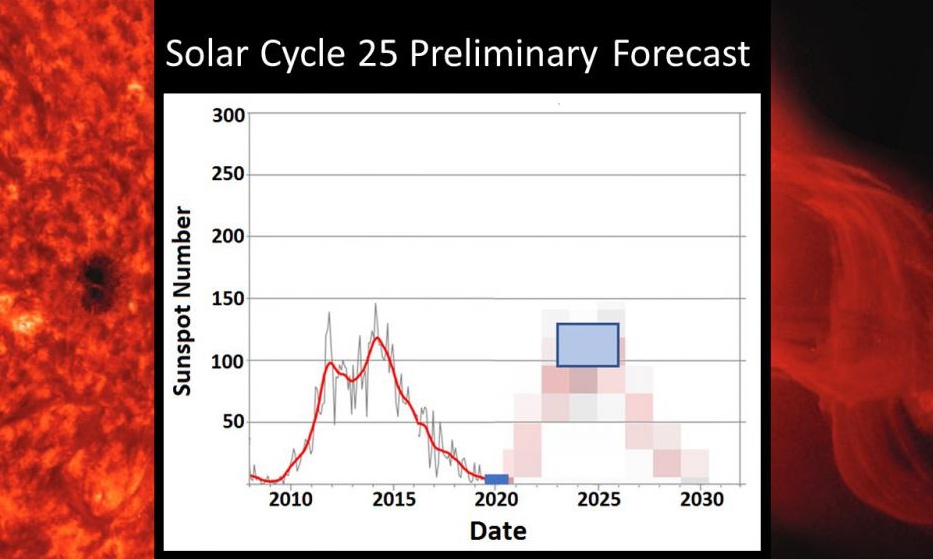 Solar Cycle 24 reached its maximum – the period when the Sun is most active – in April 2014 with a peak average of 82 sunspots. The Sun’s Northern Hemisphere led the sunspot cycle, peaking over two years ahead of the Southern Hemisphere sunspot peak.

While daily weather forecasts are the most widely used type of scientific information in the U.S., solar forecasting is relatively new. Given that the Sun takes 11 years to complete one solar cycle, this is only the fourth time a solar cycle prediction has been issued by U.S. scientists. The first panel convened in 1989 for Cycle 22.

For Solar Cycle 25, the panel hopes for the first time to predict the presence, amplitude, and timing of any differences between the northern and southern hemispheres on the Sun, known as Hemispheric Asymmetry. Later this year, the Panel will release an official Sunspot Number curve which shows the predicted number of sunspots during any given year and any expected asymmetry. The panel will also look into the possibility of providing a Solar Flare Probability Forecast.

"While we are not predicting a particularly active Solar Cycle 25, violent eruptions from the Sun can occur at any time," said Doug Biesecker, Ph.D., panel co-chair and a solar physicist at NOAA’s Space Weather Prediction Center.

A study published in 2013 estimated that powerful CME launched on July 23, 2012 (video below), which missed Earth but hit STEREO-A satellite, would have caused between $600 billion and $2.6 trillion USD damages in the United States alone. The damage would be particularly high to electrical infrastructure, such as power grid, if this CME had been directed toward Earth.

The strength of the 2012 eruption was comparable to the famous 1859 Carrington event that caused widespread damage to telegraph stations around the world and produced aurora displays as far south as the Caribbean.