Tropical Cyclone "Idai" made landfall at 23:30 UTC on March 14, 2019, close to the city of Beira (population 534 000), Mozambique as Intense Tropical Cyclone with wind speeds up to 170 km/h (104 mph) and central pressure of 960 hPa. The cyclone dropped heavy rain on the region, killed at least one person and injured five (preliminary reports). Idai became the deadliest weather disaster of the year anywhere in the world prior to landfall, with at least 122 people killed (66 in Mozambique and 56 in Malawi), thousands of homes destroyed and nearly 1 million affected.

At 00:00 UTC on March 15, Idai's eye was almost totally over land, with Beira located in it, a dozen kilometers from the center, RSMC La Reunion said. The eyewall was expected to reach the city within several minutes.

Mozambique's National Institute of Disaster Management (INGC) said houses were destroyed and pylons downed in the city, adding that the coastal town of Chinde (400 km / 250 miles) NE of Beira was also badly hit.

In addition, nearby villages have been cut off from the mainland by 2 m (6.5 feet) tidal surge.

#CycloneIdai made landfall during the night of 14 to 15 March near Beira City in central #Mozambique & brought torrential rains and winds.

An assessment team is en route to Beira, led by INCG

While INGC is yet to give an update on the situation, preliminary reports mention at least one person killed (a 3-year-old child) and at least 5 people seriously injured.

The INGC-led convoy is expected to arrive in Beira at around 20:00 local time (18:00 UTC). As the weather is getting better, the team will fly out drones for the initial assessment. 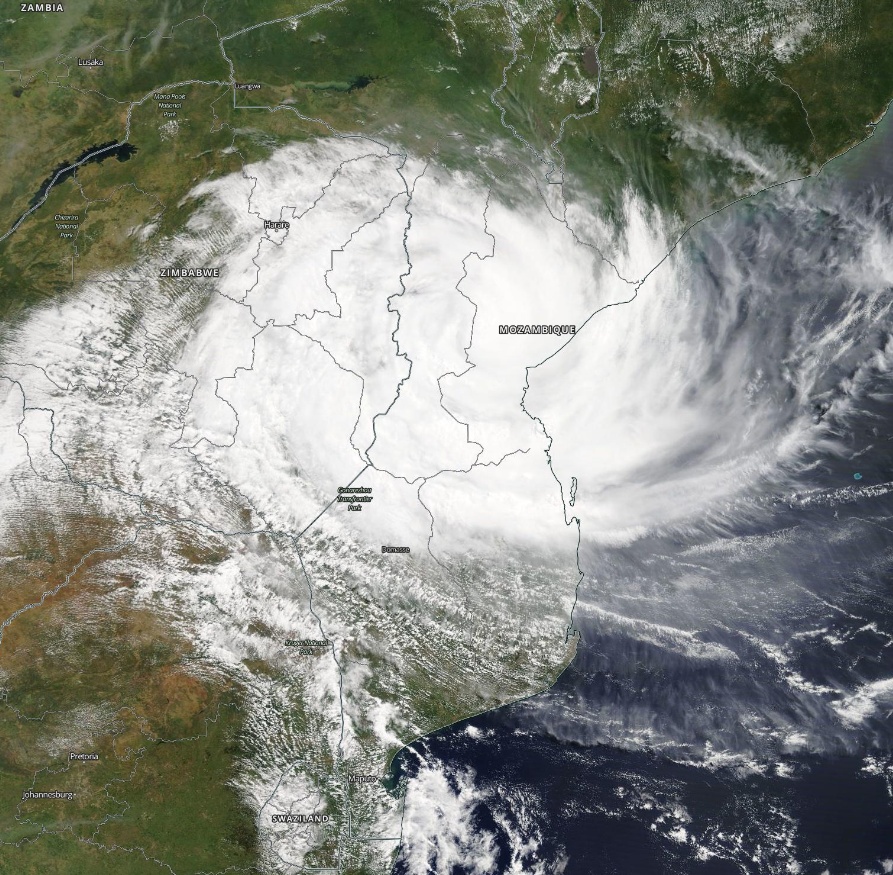 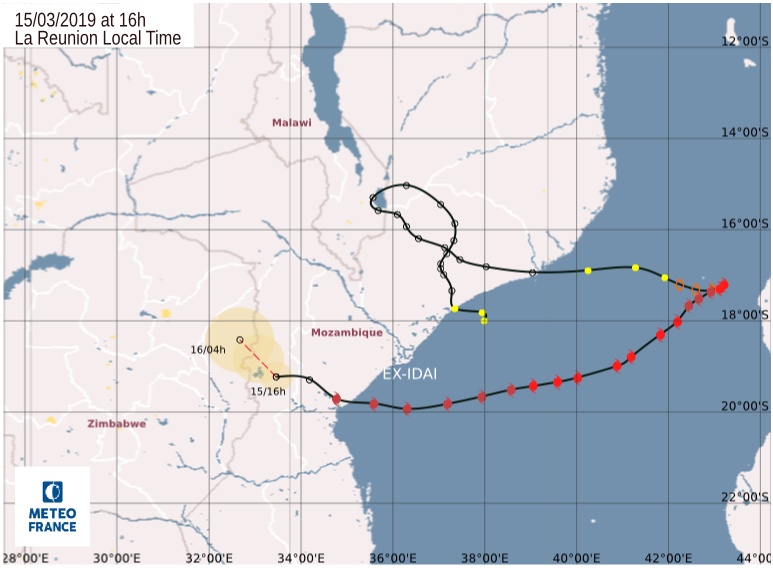 "Over the past 6 hours, Ex-Idai has continued to move inland while rapidly weakening," RSMC La Reunion said. "It should keep its WNW track and reach the border with Zimbabwe by the end of the afternoon. Even if the winds will decay significantly, the remains of the circulation are forecast to persist for several days, bringing heavy rains on Zimbabwe and the border area with Mozambique up to early next week."

This was the last warning issued by the RSMC related to this system.

At least 19 people have been killed in Mozambique and 24 in neighboring Zimbabwe, authorities said early March 16. At least 140 are missing in both countries and are also feared dead.

Due to bad weather, all flights to Beira, Mozambique have been canceled.

While the full impact of the storm is still emerging, we know that at least 145 houses were swept away and 4 major bridges damaged in and around Beira. Lack of communication continues to hamper data collection on the ground, authorities said. IFRC Africa said their colleagues indicate that many parts of Beira have been seriously damaged.

According to OCHA, preliminary estimates suggest up to 600 000 people may have been severely impacted in Mozambique, including 100 000 people already affected by flooding in early March in the Provinces of Tete and Zambezia.

Zimbabwe's information ministry said the town of Chimanimani had been cut from the rest of Manicaland province. At least 25 houses were swept away at Ngangu township alone. Numerous people there are still missing.

The death toll is expected to rise in both countries.

At least 65 people have been killed in Zimbabwe.

Devastating scenes from #Zimbabwe where Cyclone IDAI has destroyed road & bridges, cutting off affected areas in the eastern part of the country. Scores dead & many more still unaccounted for as entire villages were swept away by the huge flood #CycloneIDAI pic.twitter.com/IYhuX4DE5n

In #Mozambique, in #Zimbabwe and in #Malawi our #RedCross volunteers and staff are on the field supporting communities hit by #CycloneIdai. Local actors are always crucial to prepare communities and to intervene during and after emergencies. All our solidarity to people affected! pic.twitter.com/XGEIgGcDN1

The impact of #CycloneIdai has been heart breaking. Many lives have been lost. Many people are still in need of help.
We call upon every ZIBAWU member to donate , money, food, blankets, clothes, toiletries etc. Our workers Committees & Branch Executives are the collection points pic.twitter.com/jOFPhuEAhj