A series of Pacific storm systems will bring several rounds of heavy rainfall, mountain snow, strong winds, and burn scar flooding, especially in California. Another significant winter storm could bring heavy snow, ice, and hazardous travel from the Plains to the Midwest, Mid Atlantic, and Northeast U.S. late week and into the weekend.

A very active weather pattern will be in place across California and then the Intermountain West through the middle of the work week, NWS forecaster David Hamrich noted Tuesday, January 15. 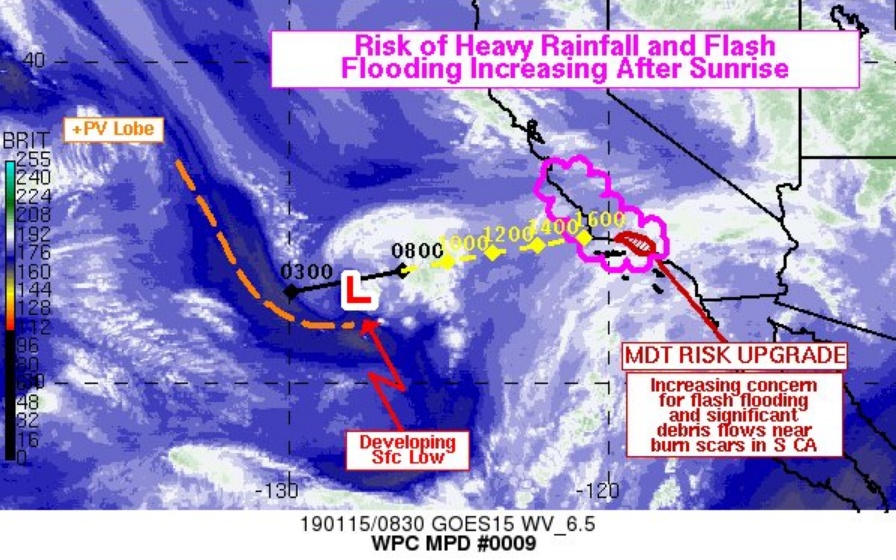 A deep Pacific trough off the West Coast will remain in place over the next few days with a frontal boundary approaching central California Tuesday evening, and a much stronger storm arrives Wednesday night.

The result will be widespread rain with enhanced rainfall for the coastal mountain ranges, and WPC has a moderate risk of flash flooding across the mountainous terrain near Los Angeles for Tuesday.

Heavy snow will fall across the Sierra Nevada and Siskiyou mountains of California, with amounts exceeding 30 cm (1 foot) at the highest elevations. 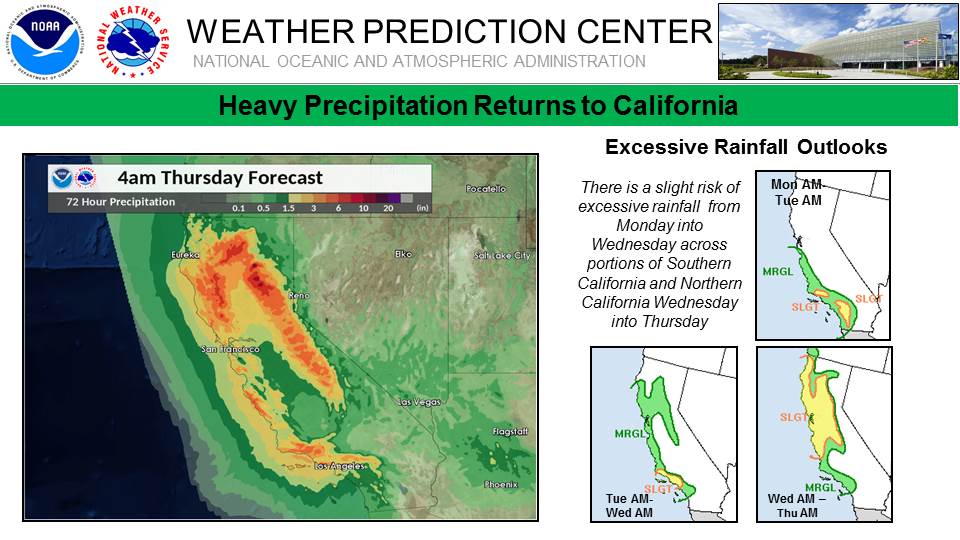 Flash flood watches were issued by the National Weather Service for burn areas in Los Angeles, Ventura and Santa Barbara counties. These areas could see as much as 25 mm (1 inch) of rain per hour from Tuesday afternoon (LT) into the evening, meteorologists warn.

Mandatory evacuations were ordered January 14 for a dozen areas around the Holy Fire burn scar in Riverside County, east of Los Angeles.

"People in these zones must go now. Rainstorms carry the potential for dangerous debris flows that can send mud, boulders and trees crashing down hillsides with little or no warning," county officials said in a statement.

The evacuation was later downgraded to voluntary but authorities urged people to stay alert, The Sentinel reports.

Evacuation orders are set to take effect at 10:00 local time January 15 In Santa Barbara County, for areas hit by the Sherpa, Whittier and Thomas fires.

Elsewhere across the continental U.S., a strong cold front drops southward across the Plains on Tuesday and into early Wednesday, bringing frigid temperatures to the Dakotas and the Upper Midwest by the middle part of the week, Hamrick noted.

There should be enough moisture with this front to produce some mixed precipitation over the lower Great Lakes and snow showers behind the front over northern Michigan.

With a large surface high over the Gulf Coast region, return flow from the Gulf of Mexico will begin to bring increasing moisture through eastern Texas and into the central Plains, where some showers are likely on Wednesday.

In addition, the northern extent of the moisture could result in some wintry precipitation across the north-central Plains on Wednesday as well.