This complex started on July 27, 2018, and the cause of the blaze is still under investigation. There have been 75 residences and 68 other structures destroyed. Nearly 4 000 fire personnel are battling the flames at present.

Extreme torching, flanking and spotting have been observed with this complex and it continues to have rapid growth when aligned with fuels, topography, and wind.

Besides the Mendocino Complex, there are three other extremely large fires consuming large swaths of the state as well: the Carr Fire, Donnell Fire and the Ferguson Fire. 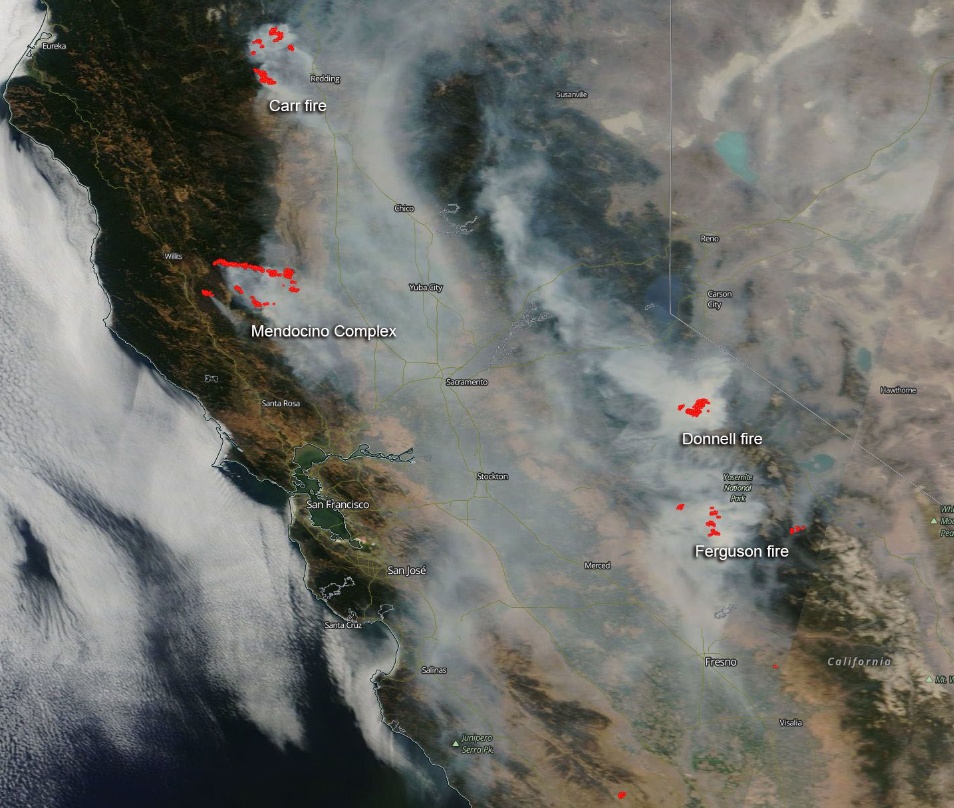 The Carr Fire has burned 67 628 hectares (167 113 acres) and is 47% contained. This fire is north of the Mendocino Complex in Shasta and Trinity Counties. It is the most destructive fire of the season, with 1 077 residences, 22 commercial structures, and 500 outbuildings destroyed. There are still 1 806 structures that are threatened. In addition, two firefighters have lost their lives fighting this blaze.

The Ferguson Fire is located right outside of Yosemite National Park. It is currently 38 174 hectares (94 331 acres) in size and is 43% contained. There currently 2 357 personnel engaged on this fire. There have been 2 fatalities and 11 injuries to date and 0 structures destroyed. This is now the largest fire in the Sierra National Forest's History.

The Donnell Fire located north of the Ferguson fire began on August 01, 2018 and its cause is unknown and under investigation. The fire is already 5 314 ha (13 200 acres) in size and is only 2% contained. 235 structures have been destroyed and there are still 1 120 threatened.

The air quality in much of California is moderate to hazardous depending on proximity to the fires, however, there are very few areas in the entire state that are not being affected by the smoke.