According to Turkish officials, dozens of people were injured after the earthquake. Samsat district governor Sedat Sezik said the earthquake was felt in neighboring cities, adding that search and rescue activities have begun in the province as AFAD teams are reaching the quake site, according to Anadolu news agency.

Turkey's health minister Ahmet Demircan said that 35 were still receiving treatment. The regional governor said the injuries were caused as people fled their homes in panic.

The quake was felt in neighboring provinces such as Şanlıurfa, Gaziantep, and Diyarbakır. According to Disaster and Emergency Management Authority (AFAD), 43 aftershocks with magnitudes ranging from 1.4 to 2.7 were experienced within the first eight hours.

Significant damage was being reported on the property in the area but no deaths so far.

Public schools will remain closed Tuesday due to the earthquake, the district governor's office said. 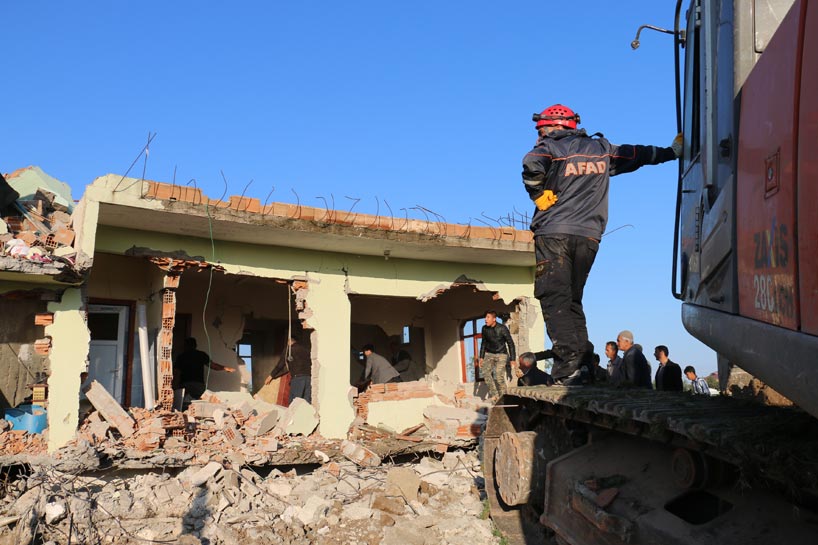 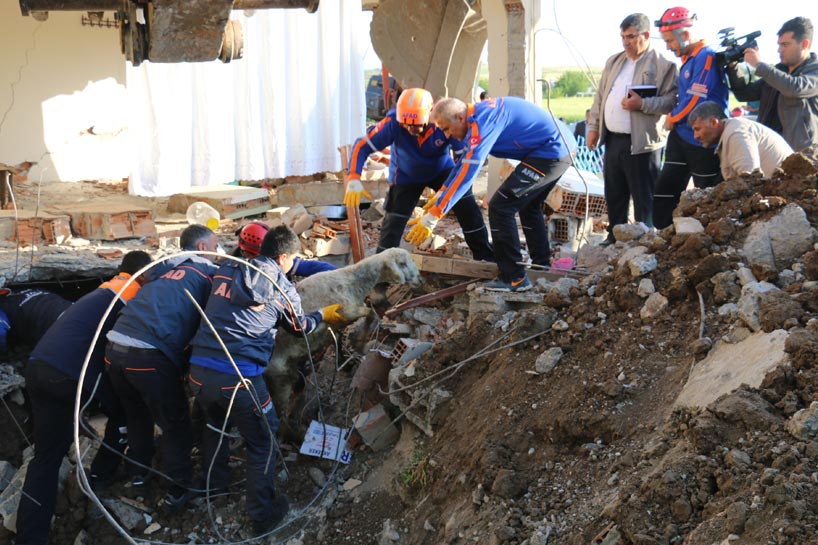 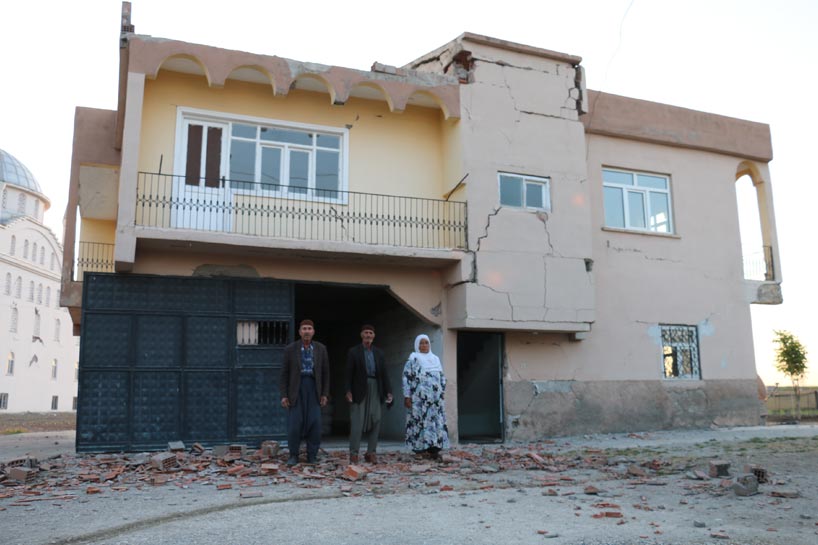 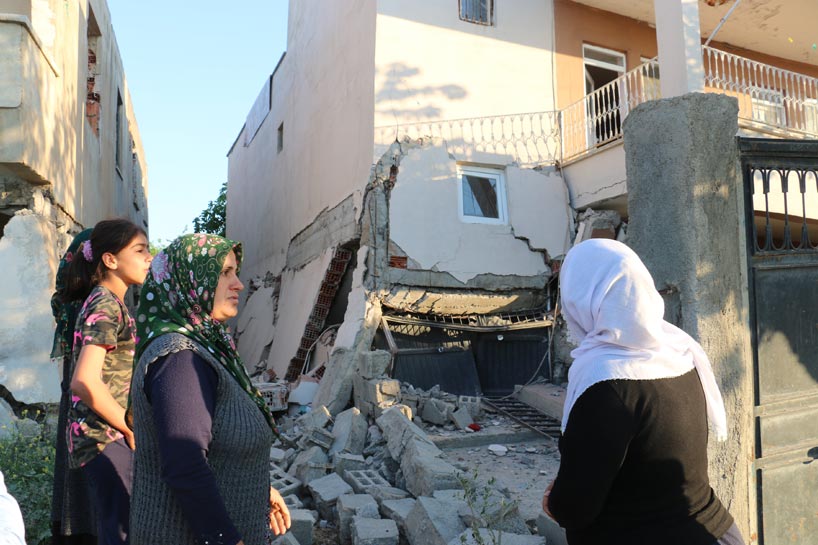 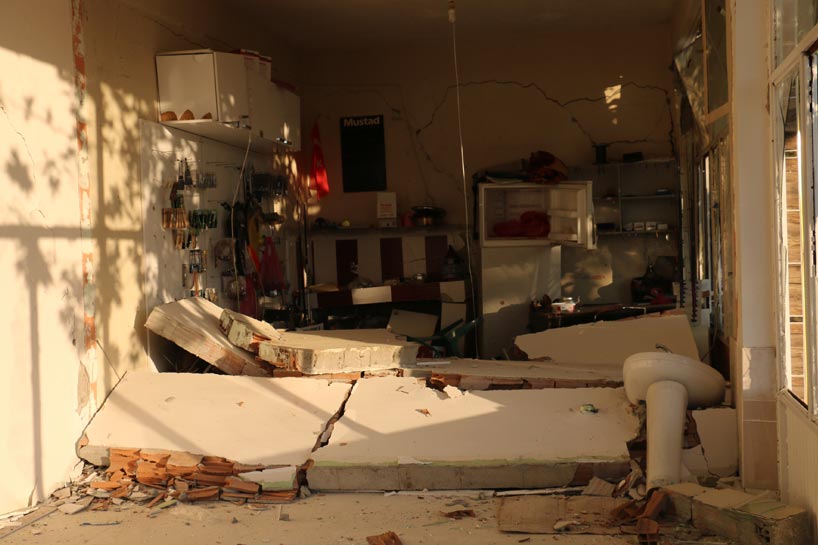 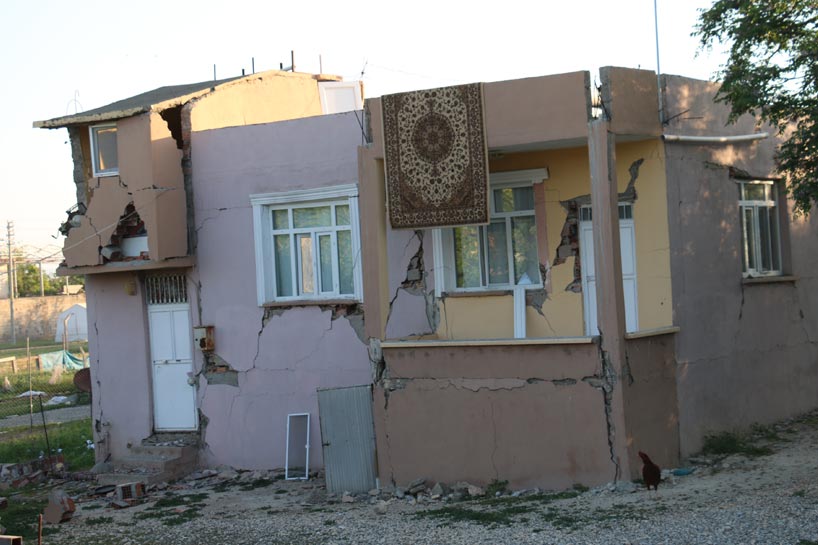 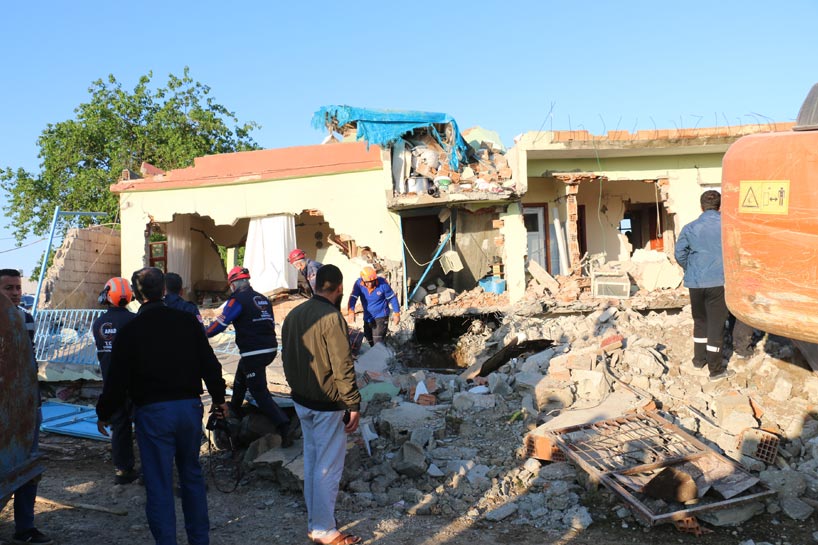 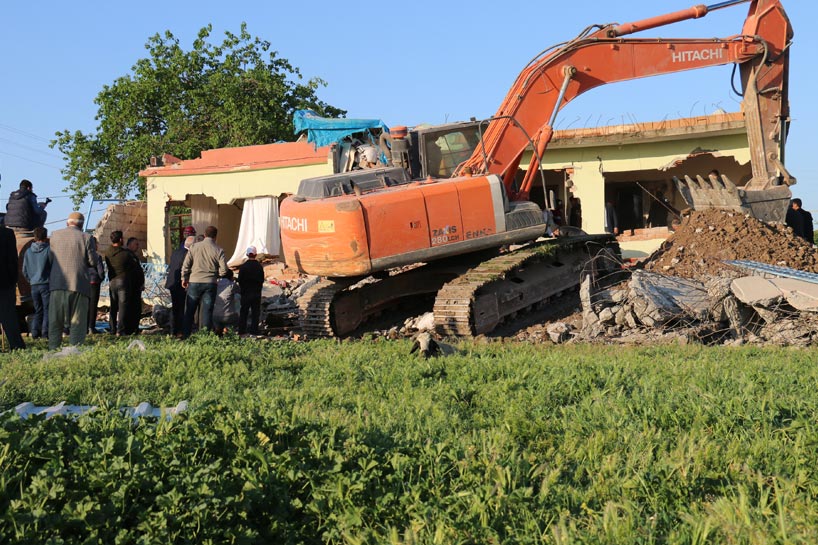 At least 39 people were injured in Adiyaman province in southeastern #Turkey after at 5.0 magnitude earthquake struck on Tuesday https://t.co/mxHOpW3okA pic.twitter.com/pX3cicNNku

In pictures: Earthquake injures 39 in Kurdish areas of Turkey https://t.co/mWKooA45Lk 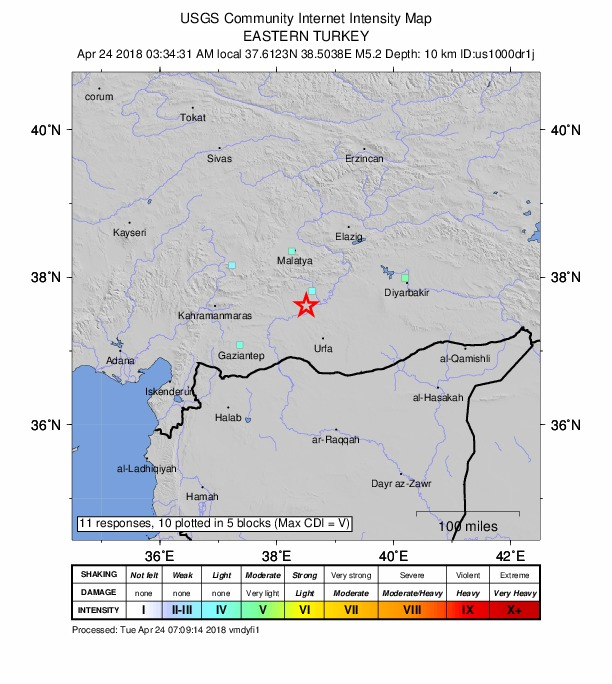 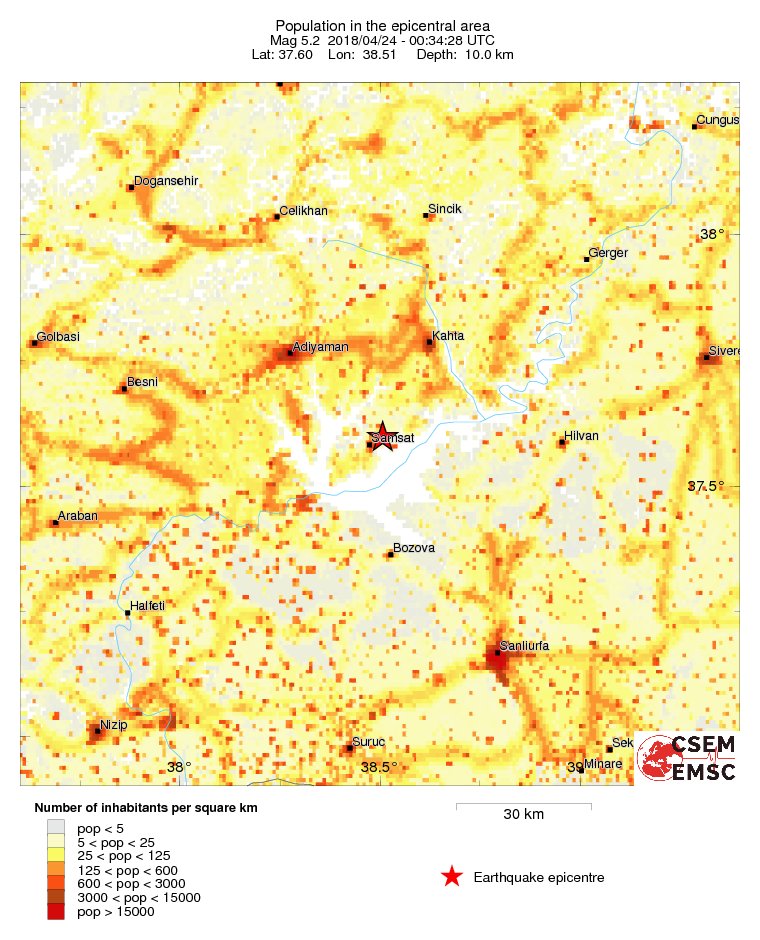 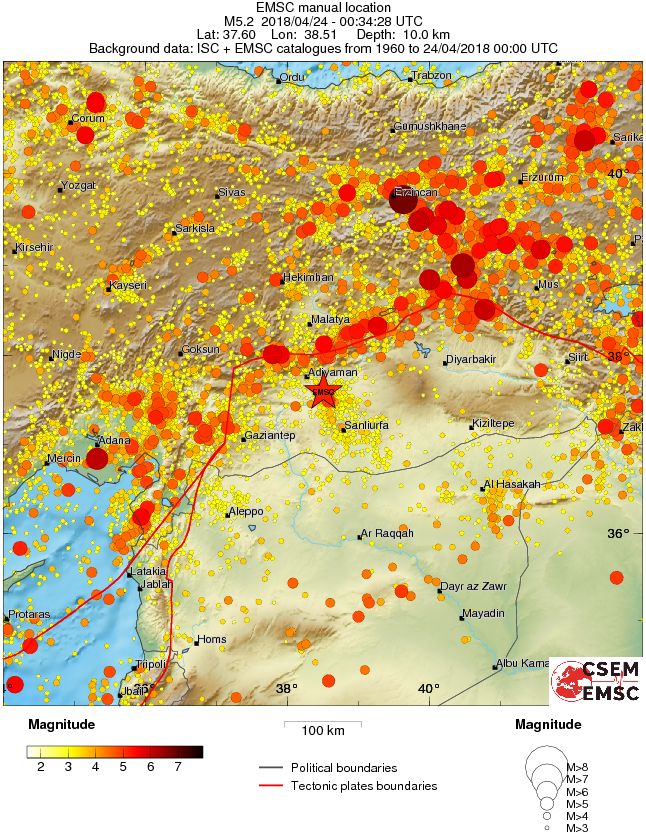 Mountain building in northern Pakistan and Afghanistan is the result of compressional tectonics associated with the collision of the India plate moving northwards at a rate of 40 mm/yr with respect to the Eurasia plate. Continental thickening of the northern and western edge of the India subcontinent has produced the highest mountains in the world, including the Himalayan, Karakoram, Pamir and Hindu Kush ranges. Earthquake activity and faulting found in this region, as well as adjacent parts of Afghanistan and India, are due to collisional plate tectonics.

Along the western margin of the Tibetan Plateau, in the vicinity of southeastern Afghanistan and western Pakistan, the India plate translates obliquely relative to the Eurasia plate, resulting in a complex fold-and-thrust belt known as the Sulaiman Range. Faulting in this region includes strike-slip, reverse-slip, and oblique-slip motion and often results in shallow, destructive earthquakes. The relatively fast moving left-lateral, strike-slip Chaman Fault system in southeastern Afghanistan accommodates translational motion between the India and Eurasia plates. In 1505, a segment of the Chaman Fault system near Kabul, Afghanistan ruptured causing widespread destruction of Kabul and surrounding villages. In the same region, the more recent 30 May 1935, M7.6 Quetta, Pakistan earthquake, occurred within the Sulaiman Range, killing between 30,000 and 60,000 people.

Off the south coast of Pakistan and southeast coast of Iran, the Makran trench is the present-day surface expression of active subduction of the Arabia plate beneath the continental Eurasia plate, which converge at a rate of approximately 20 mm/yr. Although the Makran subduction zone has a relatively slow convergence rate, it has produced large devastating earthquakes and tsunamis. For example, November 27, 1945, M8.0 mega-thrust earthquake produced a tsunami within the Gulf of Oman and Arabia Sea, killing over 4,000 people. Northwest of this active subduction zone, the collision of the Arabia and Eurasia plates forms the approximately 1,500-km-long fold and thrust belt of the Zagros Mountains, which crosses the whole of western Iran and extends into northeastern Iraq. The collision of the Arabia and Eurasia plates also causes crustal shortening in the Alborz Mountains and Kopet Dag in northern Iran. Eastern Iran experiences destructive earthquakes that originate on both strike-slip and reverse faults. For example, the 16 September 1978 M7.8 earthquake, along the southwest edge of the Dasht-e-Lut Basin killed at least 15,000 people.

Along the eastern margin of the Mediterranean region, there is a complex interaction between the Africa, Arabia and Eurasia plates. The Red Sea Rift is a spreading center between the Africa and Arabia plates, with a spreading rate of approximately 10mm/yr near its northern end, and 16mm/yr near its southern end (Chu, D. and Gordon, R. G., 1998). Seismicity rate and size of earthquakes have been relatively small along the spreading center, but the rifting process has produced a series of volcanic systems across western Saudi Arabia.

Further north, the Red Sea Rift terminates at the southern boundary of the Dead Sea Transform Fault. The Dead Sea Transform is a strike-slip fault that accommodates differential motion between the Africa and Arabia plates. Though both the Africa plate, to the west, and the Arabia plate, to the east, are moving in a NNE direction, the Arabia plate is moving slightly faster, resulting in the left-lateral, strike-slip motion along this segment of the plate boundary. Historically, earthquake activity along the Dead Sea Transform has been a significant hazard in the densely populated Levant region (eastern Mediterranean). For example, the November 1759 Near East earthquake is thought to have killed somewhere between 2,000-20,000 people. The northern termination of the Dead Sea Transform occurs within a complex tectonic region of southeast Turkey, where the interaction of the Africa and Arabia plates and the Anatolia block occurs. This involves translational motion of the Anatolia Block westwards, with a speed of approximately 25mm/yr with respect to Eurasia, in order to accommodate closure of the Mediterranean basin.

At the southern edge of the Anatolia Block lies the east-west trending Cyprian Arc with associated levels of moderate seismicity. The Cyprian Arc represents the convergent boundary between the Anatolia Block to the north and the Africa Plate to the south. The boundary is thought to join the East Anatolia Fault zone in eastern Turkey; however, no certain geometry or sense of relative motion along the entire boundary is widely accepted. (USGS)