Hundreds of homes were damaged in Jaintia Hills district of Meghalaya state, India on April 15, 2018 after hailstones the size of cricket balls accompanied by heavy rain and thunderstorm hit the region.

Local media reported around 700 houses were damaged in Shangpung alone.

Although structures suffered extensive damage, there were no reports of casualties or injuries. 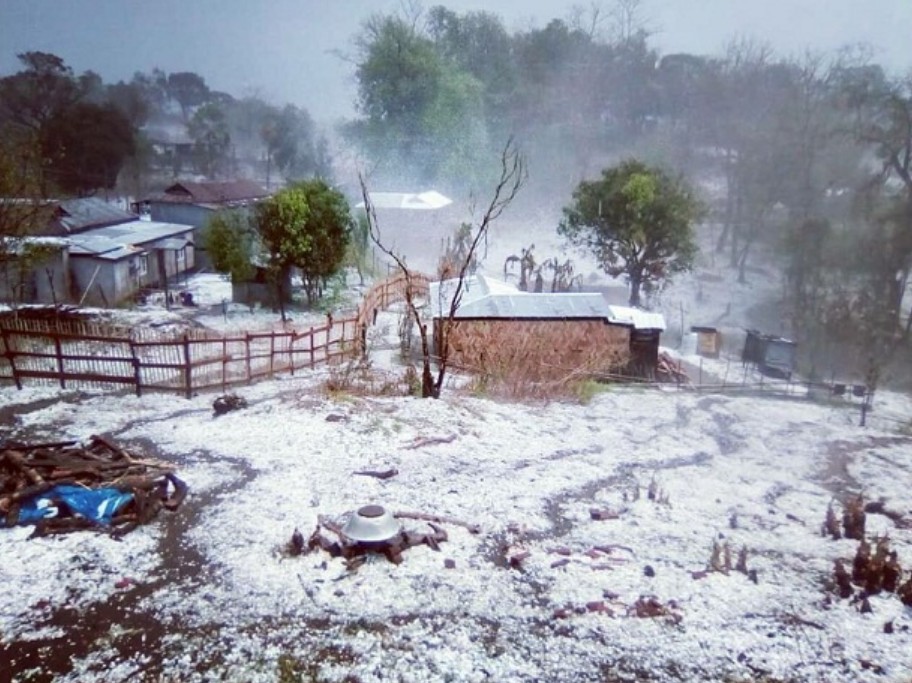 While hailstorms are not unusual in this region, these are just two of many severe weather events to hit India this year:

Rain and hailstorms damage crops in 135 000 acres in Telangana, India

Unseasonal heavy rains coupled with high-speed wind and hailstorm caused extensive damage to standing crops in nearly 55 000 hectares (135 000 acres) in Telangana district, India between April 1 and 3, 2018. Although the heavy rain brought ease to the people from…

A massive dust storm hit many parts of central and eastern Uttar Pradesh, India, on March 30, 2018, killing three people. The storm disrupted traffic and caused power outages in many locations and uprooted multiple trees, an official said. One person was killed…

At least 8 people were killed and over 100 injured as massive storms dumped heavy rain and large hail on parts of Bangladesh, Nepal, Bhutan and India on March 30, 2018. Crops and hundreds of homes were badly damaged in Bangladesh and in Rautahat area in Nepal…

A damaging tornado formed hit the village of Zira, near the city of Tarn Taran in Punjab, India on February 12, 2018, causing 'huge' devastation and injuring up to 20 people. Within minutes, the twister sent cars, tractor-trolley, water tanks, iron sheds,…

A powerful storm accompanied with very damaging hail hit parts of central and southern India over the past couple of days, destroying more than 125 000 hectares (309 000 acres) of crops and killing several people. Such powerful storms are not usual for this region…

India has just experienced its second-driest January since record-keeping began in 1901 with just 2.9 mm (0.1141 inches) of rain recorded. That's 85 percent less than the country normally sees in January. The normal January rain across India is 19.2 mm (0.75…

More than 70 people have died in India and Nepal over the weekend as intense cold wave descended upon the region. According to local media reports, lack of night shelters and amenities have already led to the death of over 70 homeless and poor people in India's…

More than 70 people have died in India and Nepal over the weekend as intense cold wave descended upon the region. According to local media reports, lack of night shelters and amenities have already led to the death of over 70 homeless and poor people in India's…