Australian monsoon is entering a more active phase in the wake of significant rainfall and flooding in Queensland's Townsville and inland areas associated with a tropical low. Tropical North Queensland is set to produce falls of 500+ mm (19.7 inches) over the course of this week, with isolated falls of as much as 700 mm (27.5 inches) likely to produce flooding.

While the rain was easing in the northwest, many catchments remain wet and vulnerable to further heavy rainfall, particularly in the far north, Queensland State Manager Bruce Gunn said. "We are seeing widespread flooding in a number of large inland rivers, and these are expected to remain in flood warnings for days and even weeks as flood waters move through these systems," he said.

"There has already been significant disruption to transport and isolation of communities caused by flooding and we are urging the public to check for road closures and current warnings, and avoid travel if possible when warnings are in place. The focus for the heaviest falls has now shifted back to the coast where a flood watch was issued yesterday for coastal catchments from Ingham to Cairns, and extending as far north as Cooktown."

New flood warnings were issued this morning for the Tully, Murray and Upper Herbert Rivers following heavy rainfall overnight with a peak of 313 mm (12.3 inches) recorded at Davidson Creek near Tully. Further widespread falls are expected in the 100 to 200 mm (3.9 – 7.9 inches) range, with isolated heavier falls possible, the Bureau of Meteorology warns.

"The monsoon really kicked off over the past two days, much earlier and more intense than models predicted," Higgins Storm Chasing reports.

While this rainfall isn’t uncommon during the peak of the cyclone and monsoon season (late February to early April), its still quite extraordinary that several places could easily exceed 500 mm (19.7 inches) between March 5 and 12, and some places (such as Davidson Creek who already has a huge head start) pushing the 700 mm (27.5 inches) mark, the group said. 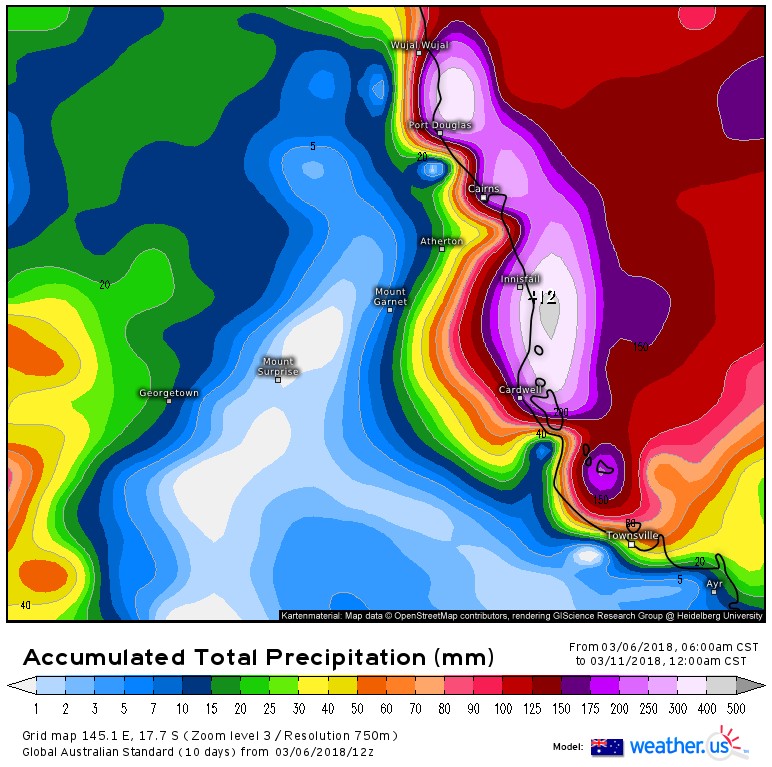 A flood watch has been issued for catchment areas between Cooktown and Ingham which includes the Daintree, Johnstone and Barron river catchments.