Hubble Space Telescope has photographed the farthest active inbound comet ever seen, at a whopping distance of 2.4 billion km (1.5 billion miles) from the Sun (beyond Saturn's orbit). The comet is record-breaking because it is already becoming active under the feeble glow of the distant Sun. ​It will make its closest approach to the Sun in 2022, just beyond the orbit of Mars.

Called C/2017 K2 (PANSTARRS) or "K2", this comet has already begun to develop a 130 000 km (80 000 miles) wide coma (halo of dust) around its solid nucleus. These observations represent the earliest signs of activity ever seen from a comet entering the Solar System's planetary zone for the first time.

K2's orbit indicates that it came from the Oort Cloud, a spherical region almost a light-year in diameter and thought to contain hundreds of billions of comets. 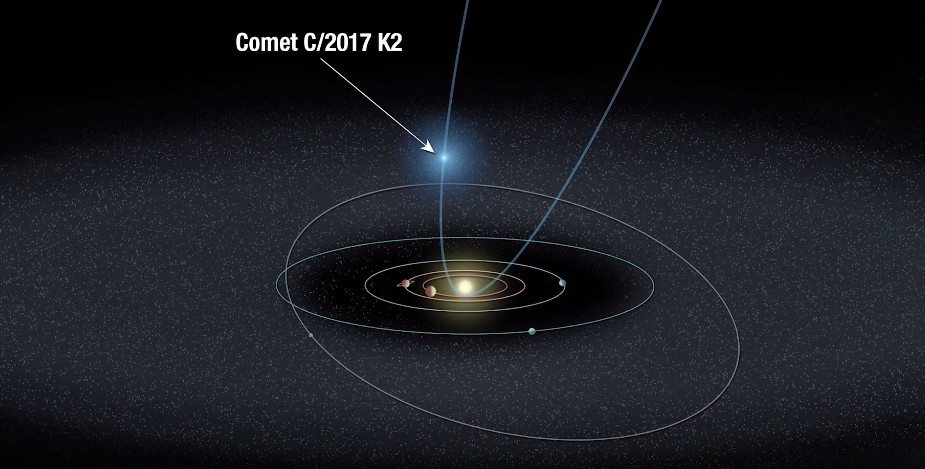 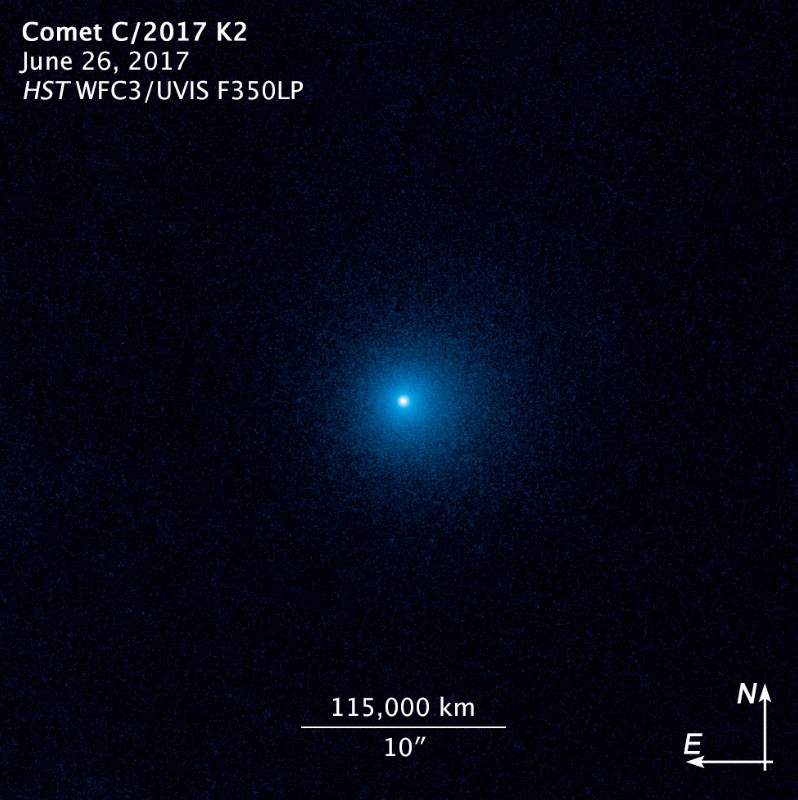 "K2 is so far from the Sun and so cold, we know for sure that the activity — all the fuzzy stuff making it look like a comet — is not produced, as in other comets, by the evaporation of water ice," said lead researcher David Jewitt of the University of California, Los Angeles. "Instead, we think the activity is due to the sublimation [a solid changing directly into a gas] of super-volatiles as K2 makes its maiden entry into the solar system's planetary zone. That's why it's special. This comet is so far away and so incredibly cold that water ice there is frozen like a rock."

Based on the Hubble observations of K2's coma, Jewitt suggests that sunlight is heating frozen volatile gases – such as oxygen, nitrogen, carbon dioxide, and carbon monoxide – that coat the comet's frigid surface. These icy volatiles lift off from the comet and release dust, forming the coma. Past studies of the composition of comets near the Sun have revealed the same mixture of volatile ices.

"I think these volatiles are spread all through K2, and in the beginning billions of years ago, they were probably all through every comet presently in the Oort Cloud," Jewitt said. "But the volatiles on the surface are the ones that absorb the heat from the Sun, so, in a sense, the comet is shedding its outer skin. Most comets are discovered much closer to the Sun, near Jupiter's orbit, so by the time we see them, these surface volatiles have already been baked off. That's why I think K2 is the most primitive comet we've seen."

K2 was discovered in May 2017 by the Panoramic Survey Telescope and Rapid Response System (Pan-STARRS) in Hawaii, a survey project of NASA's Near-Earth Object Observations Program. Jewitt used Hubble's Wide Field Camera 3 at the end of June to take a closer look at the icy visitor.

Hubble's sharp "eye" revealed the extent of the coma and also helped Jewitt estimate the size of the nucleus — less than 19 km (12 miles) across — though the tenuous coma is 10 Earth diameters across.

This vast coma must have formed when the comet was even farther away from the Sun. Digging through archival images, Jewitt's team uncovered views of K2 and its fuzzy coma taken in 2013 by the Canada-France-Hawaii Telescope (CFHT) in Hawaii. But the object was then so faint that no one noticed it.

"We think the comet has been continuously active for at least four years," Jewitt said. "In the CFHT data, K2 had a coma already at 3.2 billion km (2 billion miles) from the Sun, when it was between the orbits of Uranus and Neptune. It was already active, and I think it has been continuously active coming in. As it approaches the Sun, it's getting warmer and warmer, and the activity is ramping up."

But, curiously, the Hubble images do not show a tail flowing from K2, which is a signature of comets. The absence of such a feature indicates that particles lifting off the comet are too large for radiation pressure from the Sun to sweep them back into a tail.

Astronomers will have plenty of time to conduct detailed studies of K2. For the next five years, the comet will continue its journey into the inner solar system before it reaches its closest approach to the Sun in 2022 just beyond Mars' orbit. "We will be able to monitor for the first time the developing activity of a comet falling in from the Oort Cloud over an extraordinary range of distances," Jewitt said. "It should become more and more active as it nears the Sun and presumably will form a tail."

Jewitt said that NASA's James Webb Space Telescope, an infrared observatory scheduled to launch in 2018, could measure the heat from the nucleus, which would give astronomers a more accurate estimate of its size.

The team's results will appear in the September 28 issue of The Astrophysical Journal Letters.