Forecast track for Tropical Cyclone "Donna" has changed and the cyclone is now expected to pass between Vanuatu and New Caledonia over the coming days. Forecast models are still in disagreement but it seems Vanuatu might be spared of a direct hit. Nevertheless, the effects will be felt across the country and it will all depend on how far away the center passes.

At 03:00 UTC on May 3, the center of Tropical Cyclone "Donna" was located approximately 560 km (347 miles) north-northwest of Port Vila, Vanuatu, and has tracked west-southwestward at 11 km/h (6.9 mph) over the past six hours, according to JTWC. Animated multispectral satellite imagery depicted weakening convection and warming cloud tops, the agency said.

Tropical Cyclone "Donna" forecast track by JTWC on May 5, 2017 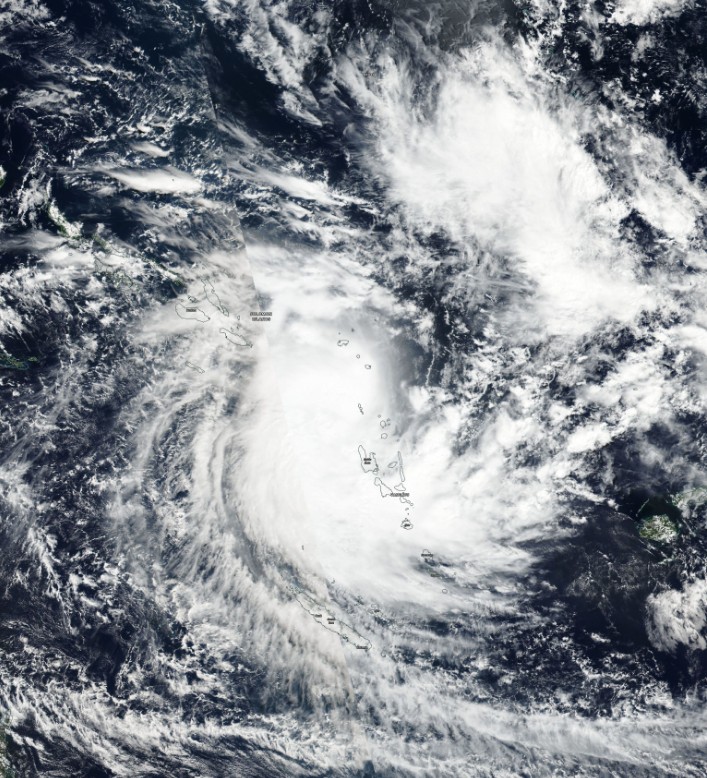 Donna is expected to keep intensifying over the next 2 to 3 days while moving between Vanuatu and New Caledonia, reaching peak intensity of 213 km/h (132 mph) by 06:00 UTC on May 7. This would make Donna an equivalent to a Category 4 hurricane on the Saffir-Simpson scale. Donna is expected to remain at that strength by at least 06:00 UTC on May 8 and then start its weakening trend.

According to Nadi RSMC, the official forecaster for this region, Donna had maximum 10-minute average winds near the center estimated at about 139 km/h (86 mph) and a pressure of 975 hPa at 06:00 UTC today.

Tropical Cyclone "Donna" forecast track by RSMC Nadi on May 5, 2017 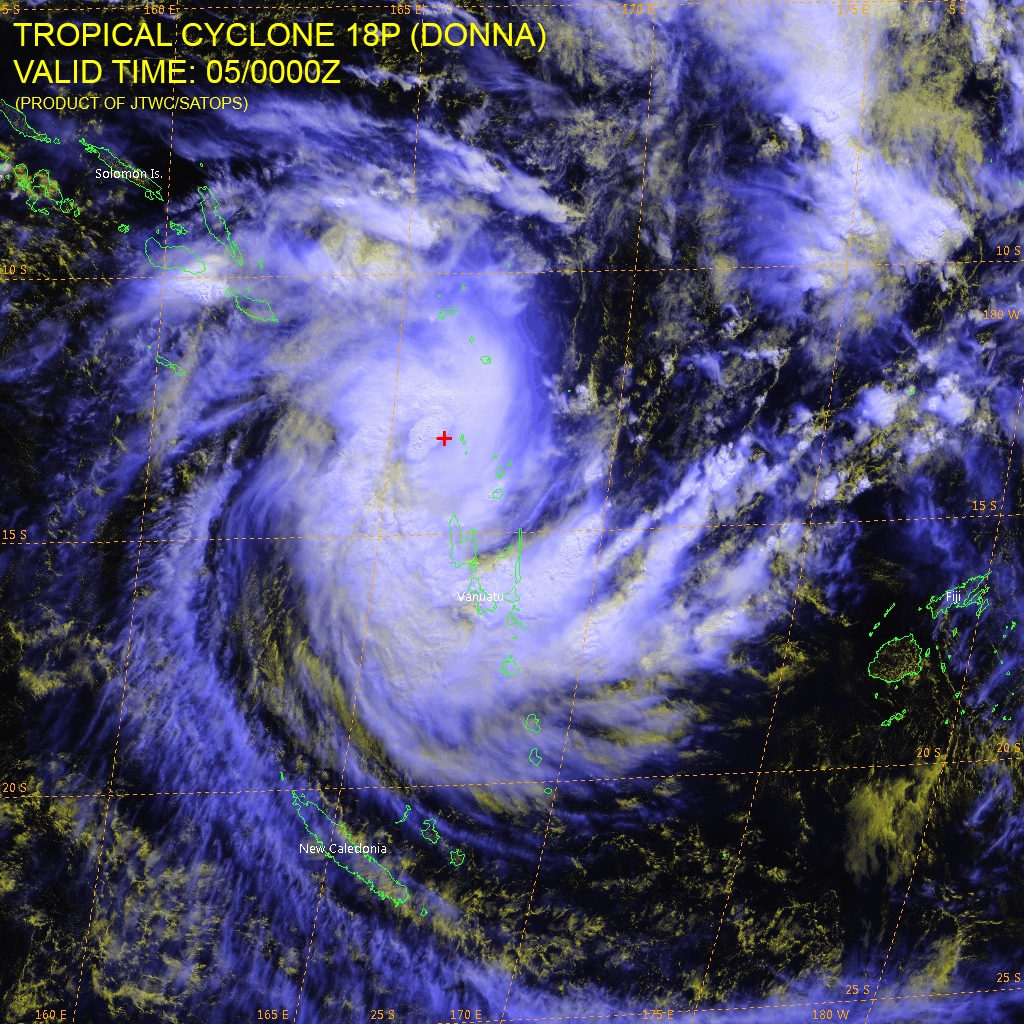 At 5:00 local time on May 5, Severe Tropical Cyclone Donna (Category 3) was located 90 km (55.9 miles) northwest of Torres and 230 km (143 miles) northwest of Gaua. Very destructive winds and very rough to phenomenal seas with heavy swells will affect TORBA, SANMA and MALAMPA. Heavy rainfall and flash flooding is also expected over TORBA, SANMA, PENAMA and MALAMPA especially over low lying areas and areas close to river banks. Coastal flooding is also expected. At the time of publishing the NDMO Red Alert is now current for TORBA province, Yellow Alert is now current for SANMA and MALAMPA province.

The National Disaster Management Office (NDMO) is communicating widely with Provincial authorities, partner agencies and local communities to establish a preliminary understanding of the extent and type of impacts. All information is subject to update and change as the situation evolves and assessments are undertaken.

Torba Province is the main affected area so far and has experienced destructive winds and flash flooding. Limited communications are inhibiting the collection of information and the understanding of the situation is incomplete at this time. Contact with provincial authorities in the Banks Group of islands is reporting damage to schools, churches and households from destructive winds. Evacuation centres have been activated. No communication has been made to the Torres group of islands, which are expected to be the most affected. TVL phone network is down in Torba and contact on Digicel is isolated.

Countrywide disruptions to domestic and international flights are ongoing due to weather.

The NDMO is coordinating the response and the National Emergency Operations Centre remains operational. The National Disaster Committee met at 14:00 on May 5. International partners including UN agencies, FRANZ partners, SPC and INGOs continue to be in contact with NDMO to offer assistance. The cluster system remains active and clusters are preparing contingency and response plans. Vanuatu Meteorology and Geohazards Department continues to provide regular forecast updates.
Partner agencies including Government Departments, NGOs, faith based groups and the Red Cross network continue to support the National Disaster Management Office in information gathering and contingency planning.

According to the JTWC, Donna's maximum sustained winds at 12:00 UTC were 167 km/h (103 mph). This placed Donna on the upper edge of Category 2 hurricane equivalent on the Saffir-Simpson hurricane wind scale. The system is expected to continue intensifying over the next 24 – 48 hours peaking at 213 km/h (132 mph). 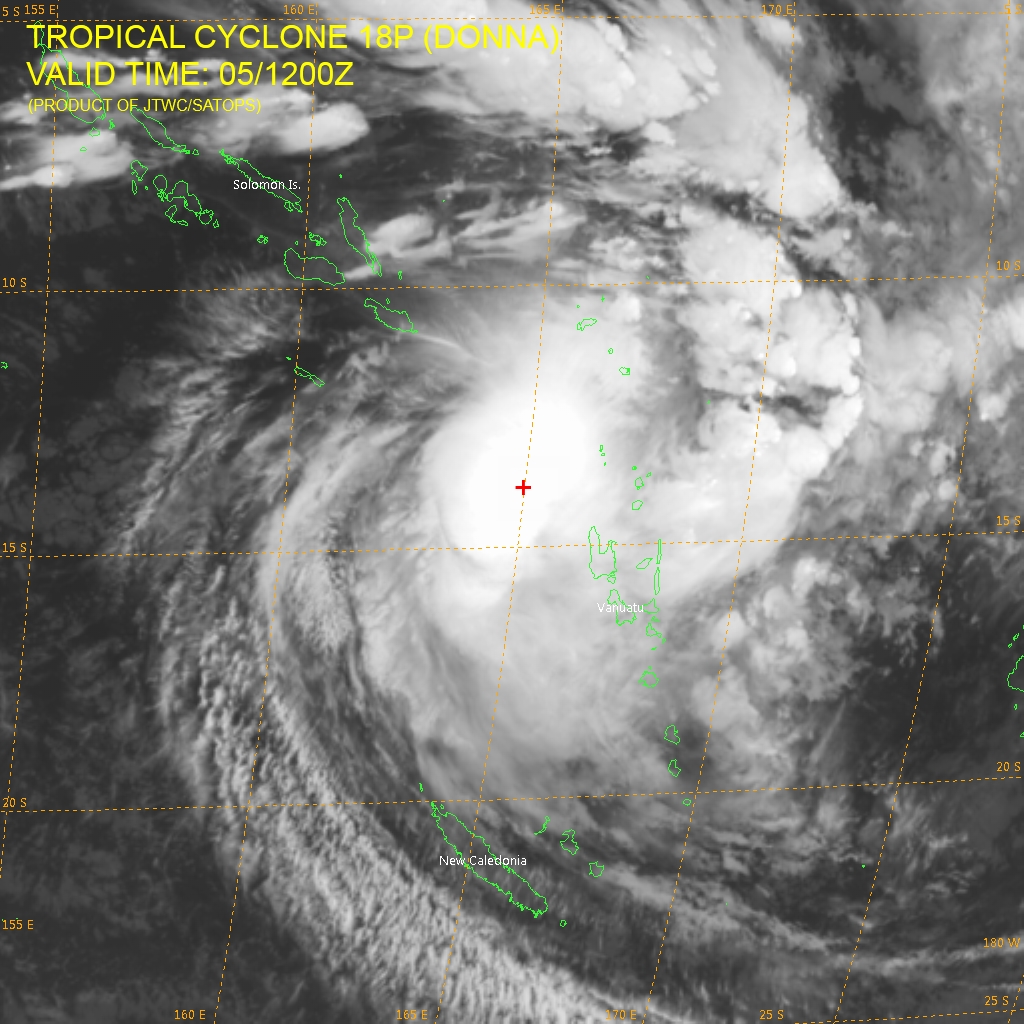 Torba Province remains the most affected area. The following information is from HF radio contact with the Torres Area Secretary at 14:00 today covering the Torres group of islands. Provincial authorities have conducted a quick rapid assessment with Community Disaster Committees on the four islands: Loh; Hui; Tegua; and Toga. Only one of two communities on Toga island has been reached so far. The initial findings are the following:

• Significant number of houses totally destroyed and the majority of houses damaged.

• On Loh, almost all people on the island are sheltered in an evacuation center, this includes schools, a cave and police station. People are awaiting the all clear from the NDMO before returning.

• Robin School in Loh is reported to have damage to two buildings, a dormitory, a dining hall and two tanks.

• In other islands people were evacuated in to strong houses.

• Quantity of water is enough for everyone, but likely contaminated

• Gravity fed system on Hui Island is destroyed, people are relying on water from tank and an underground well, but are also contaminated.

• All gardens are severely damaged in all communities contacted

• Food supply could be enough for 2 – 3 weeks, included Yam, Taro and Manioc.

• All toilet facilities are destroyed.

• 5 banana boats available in Torres, but there is no fuel available

• Health facility in Loh is functional.

• Air strip in Lo his covered with debris, however, as of 17:15 the area council has already coordinated the clearing of the air strip.

• TVL Tower in Loh is damaged and unlikely to be repaired soon. It is the only telecommunication network in Torres.

• No injury or health issues reported.

A widely attended inter-agency meeting was held at 9am this morning. Cluster meetings are taking place. The NDMO will be working closely with the Red Cross and other agencies to develop a response plan for the affected areas in Torba Province. Agencies are encouraged to continue to liaise closely with the NDMO to coordinate any response activities.

Animated multispectral satellite imagery depicts an overall weakening trend despite a recent resurgence of deep convection and curved banding. The system is expected to intesify to a peak of 204 km/h (126 mph) under favorable conditions to include warm sea surface temperature, low vertical wind shear and robust poleward outflow. 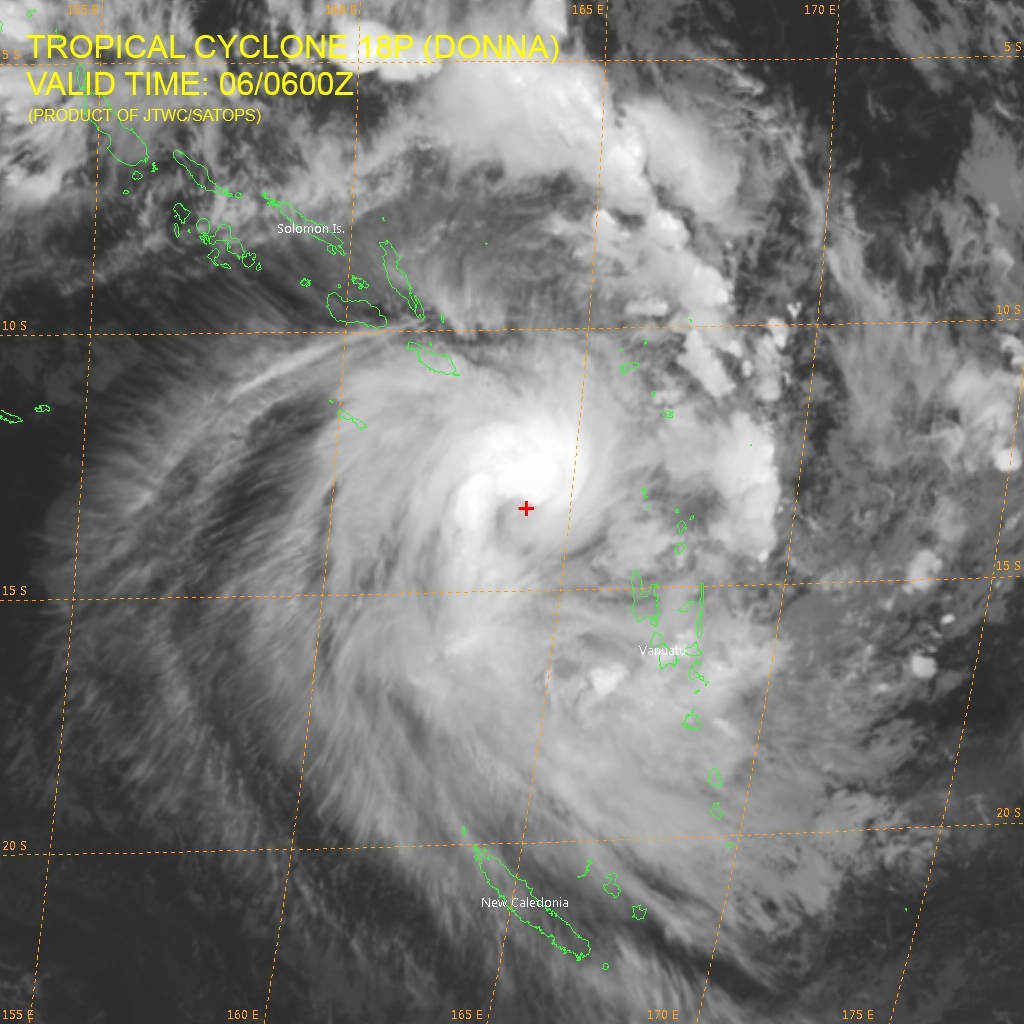