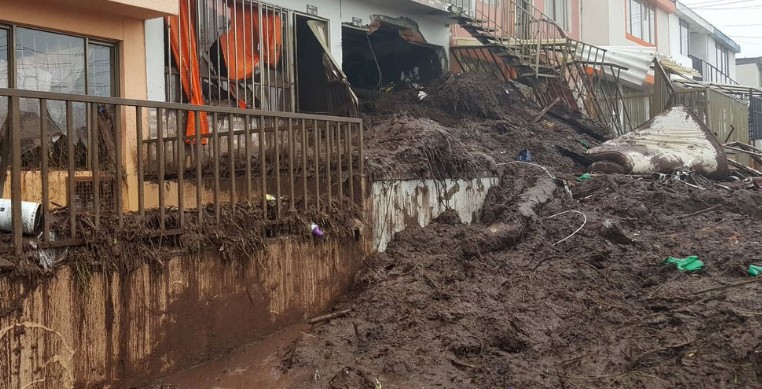 Deadly floods and landslides hit Colombia's mountainous city of Manizales on Wednesday, April 19, 2017, after the region registered a month's worth of rain overnight. At least 14 people were killed and 22 are missing, government officials said and added that death toll is expected to rise. This is the second deadly landslide to hit the country within 20 days.

Colombia was still recovering from a massive landslide in Mocoa which killed more than 320 people and displaced thousands on March 31, when another similar disaster hit Manizales.

Extremely heavy rain started falling on Manizales around 19:30 local time Tuesday, April 18. It was falling is such quantities that numerous streams soon overflowed and a part of the Sancancio hill came down in an avalanche, Colombia Reports said.

At least 20 homes in the affected neighborhoods at the foot of the Sancancio hill were destroyed. Parts of the city were left without electricity and running water while the city center was isolated after an avalanche blocked a road, Manizales Mayor Octavio Cardona said.

"The situation in Manizales is very worrying. The toll is sad, there are eleven people dead," Transport Minister Jorge Eduardo Rojas said after meeting with the province's governor and the mayor of the city.

Twenty-two people are still missing and 23 people are injured, Cardona said and added that 75 homes have been completely destroyed and 400 homes were evacuated amid fears of more landslides.

The National Unit for Disaster Risk Management (UNGRD) reports that approximately 40 landslides in the city of Manizales, east of Colombia, have so far left at least 14 people dead, 22 missing, 70 families affected and dozens of houses collapsed. The strong rains are causing landslides every few minutes. Rescue operations are about to be undertaken by national authorities. Reports from local media indicate a heavier death toll and larger impact on people and infrastructure.

Over the next 24 h moderate to locally heavy rain may affect several areas of the north-west, north-east and west of the country, including the areas already affected. As of 07:00 UTC on April 20, the Institute for Hydrology, Meteorology and Environmental Studies (IDEAM) has issued a Red Alert for landslides and flash floods in the department of Caldas. (ECHO)