Extremely dangerous Tropical Cyclone "Debbie" continues moving toward Queensland, Australia. Landfall is expected between Ayr and Cape Hillsborough (north of Mackay) on Tuesday morning, March 28, 2017 (local time), with wind gusts potentially to 275 km/h (171 mph) near the center of the system. Residents between Ayr and St Lawrence are specifically warned of the dangerous storm tide as the cyclone crosses the coast. Widespread daily rainfall totals of 150 to 250 mm (5.9 to 9.8 inches), with isolated event totals of 500 mm (19.7 inches), are likely to lead to major river flooding over a broad area this week.

As of 23:00 AEST (12:00 UTC) on March 27, Debbie is a powerful, Category 4 tropical cyclone on the Australian tropical cyclone wind scale. Maximum sustained winds near the center are reaching 175 km/h (109 mph) with wind gusts to 250 km/h (155 mph). This makes Debbie a Category 3 hurricane on the Saffir-Simpson Hurricane Wind Scale.

At the time, its center was located within 160 km (99 miles) ENE of Bowen and 185 km (115 miles) NNE of Mackay, Queensland. The cyclone is moving at a speed of 7 km/h (4.3 mph) and it may intensify further as it continues its WSW track towards the coast of Queensland.

"At this stage, we can't rule out a category five system during the coming hours," BOM forecaster Brett Harrison said a couple of hours ago. 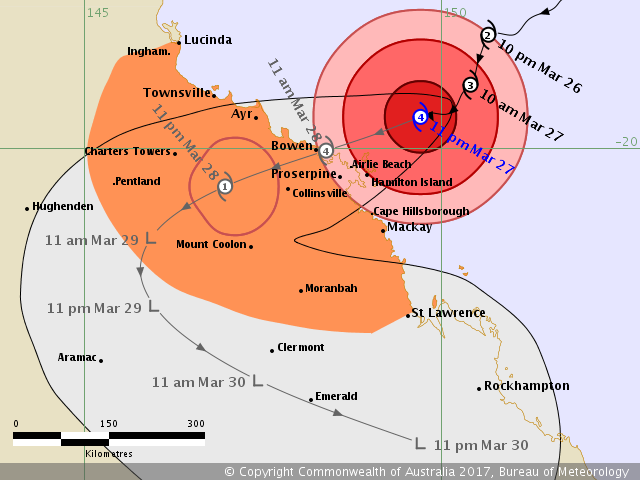 The Australian Bureau of Meteorology has warned residents to prepare for the worst storm to hit the state since Tropical Cyclone "Yasi" in 2011.

More than 25 000 people were advised to evacuate from low-lying areas in Mackay by midnight. "The range of inundation may be as much as 0.8 meters (2.6 feet) above highest astronomical tide or worst case scenario 2.5 meters (8.2 feet) above," Queensland Police Service Commissioner Ian Stewart said.

"This is a destructive cyclone, make no mistake", Queensland Premier Annastacia Palaszczuk said.

"It is going to be a very long night for a large number of Queensland families," Palaszczuk said as quoted by the ABC. "It's going to be a tough night, but I also want to reassure you that in the daybreak, once the storm has passed, we have emergency personnel ready to assist you and your families.

"It could take many hours, the BOM has even advised us it could take up to 18 hours for this core to pass. I want everyone to be safe. Everyone, please do not go outside, don't risk it. Don't risk your life or risk the life of a loved one. Stay indoors. This is a destructive cyclone, make no mistake."

Bruce Gunn from Emergency Management Queensland said the situation is changing rapidly. "People in the path of the core of the cyclone can expect many, many hours of sheltering."

"Remember that the lull in the winds may be the eye of the cyclone and the destructive winds will return from the opposite direction, so be very careful about going outside," Gunn said. 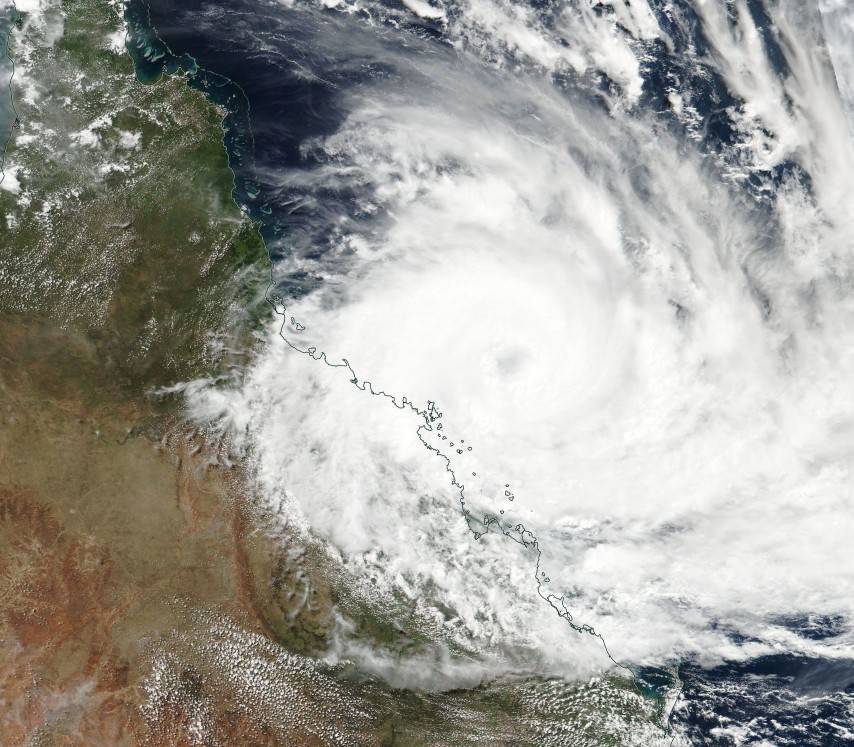 According to BOM's Tropical Cyclone Forecast Track released 23:00 AEST, Monday, March 27, Debbie's very destructive core is forecast to cross the coast between Ayr and Cape Hillsborough (north of Mackay) on Tuesday morning (local time, UTC -11 hours) with wind gusts potentially to 275 km/h (171 mph) near the center of the system.

Destructive with gusts over 125 km/h (77 mph) are beginning to occur about the Whitsunday Islands, and will extend further to the exposed coast and islands between Ayr and Mackay later tonight. These destructive winds may extend further northwest along the coast to Townsville and to adjacent inland areas, including Collinsville and Charters Towers, and Mount Coolon during the day on Tuesday.

Gales are now occurring about the Whitsunday coast and south to Mackay. These gales are expected to extend to the remaining coastal and island areas between Townsville and St Lawrence tonight. Gales could potentially extend further northwest to Lucinda and further inland to locations such as Charters Towers, Pentland, Mount Coolon, and Moranbah on Tuesday.

BOM said residents between Ayr and St Lawrence are specifically warned of the dangerous storm tide as the cyclone crosses the coast on Tuesday morning. The sea is likely to rise steadily up to a level well above the normal tide, with damaging waves and flooding of some low-lying areas close to the shoreline as the cyclone approaches the coast on Tuesday. Large waves may also develop along the beachfront. People living in areas likely to be affected by this flooding should take measures to protect their property as much as possible and be prepared to follow instructions regarding evacuation of the area if advised to do so by the authorities.

Areas of heavy rain with the potential to cause severe flash flooding have developed around the central coast and Whitsundays district and are expected to spread to other parts of the northern and central Queensland coast and adjacent inland areas tonight and continue through Tuesday. Widespread daily rainfall totals of 150 to 250 mm (5.9 to 9.8 inches), with isolated event totals of 500 mm (19.7 inches), are also likely to lead to major river flooding over a broad area this week, and a Flood Watch is current for coastal catchments between Rollingstone and Gladstone, extending inland to the Upper Flinders, Thomson and Barcoo catchments.