A massive mine waste landslide from an open pit coal mine occurred at Kakanj in Bosnia and Herzegovina last week, blocking a river and forcing 150 people to evacuate Friday, February 24, 2017.

The lake created by the landslide overflowed Saturday morning, February 25, following heavy overnight rain and forced the closure of a busy highway connecting the capital Sarajevo with the town of Zenica.

Civil protection officials said emergency crews have redirected drivers to alternative roads and were struggling to defuse the lake's flooding threat by channeling its water into drainage ducts.

Landslide expert Dave Petley drew the boundaries of the mine waste landslide on the image below. 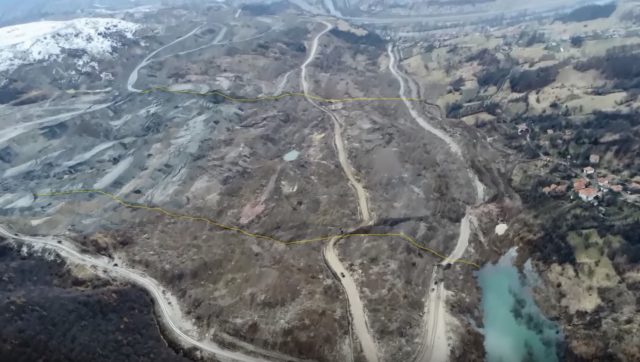 "This is clearly a very large failure," Petley said.

"I am not sure that the existing landslide is the whole story at Kakanj," he said.

"The video shows that further along the slope, towards the main valley, there is another rather large break in the road. I don’t know what this break represents, and I cannot speculate, but if I was investigating this slope I’d want to know. It could be unrelated. In the meantime, the site needs investigation and monitoring."