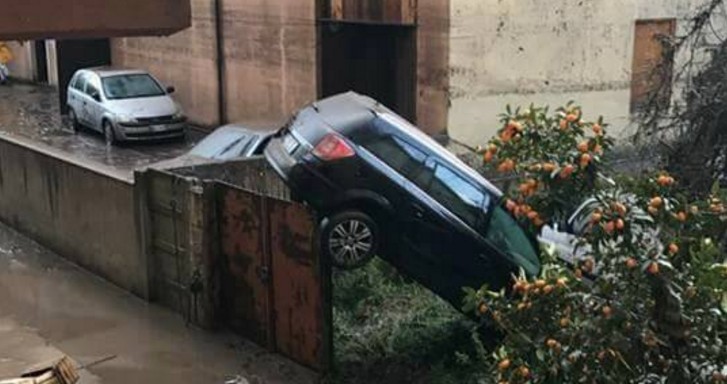 A low pressure area is producing heavy rain and strong winds in parts of southern Italy since January 21, 2017. The storm produced wind gusts up to 150 km/h (93 mph), locally large hail and at least two waterspouts, of which one reached land and damaged homes. At least one person has died.

Torrential rain and strong winds were affecting the provinces of Agrigento, Messina, Trapani, Palermo, Catania, ANSA reported. Two rivers in Syracuse have overflowed and a stretch of the road in Girifalco, Catanzaro collapsed due to a landslide on January 23, it added.

Schools are closed in Reggio, Catanzaro, Crotone and in several municipalities of the Ionian coast.

A 67-year-old man died in Castronovo di Sicilia, Palermo after his car was swept away by muddy waters.

A spectacular waterspout was recorded off Giorgino beach, Cagliari, Sardinia on January 21.

Another waterspout formed near the coast of Capottera and reached land, raising dust and debris and causing damage to homes. Find the images at Meteogiornale.it.

Heavy snow was reported in Lazio and Abruzzo. At least 6 500 homes have lost power in Teramo where authorities warned against avalanches.