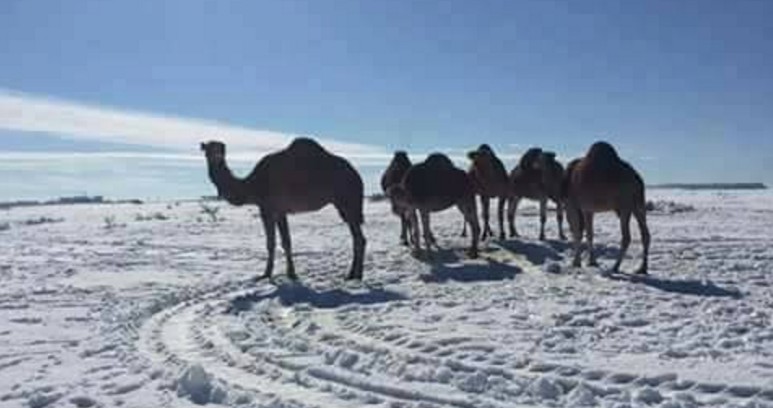 A low pressure area that brought rare snow to eastern Spain this week has also produced substantial rain and snow across northern Algeria. Heavy snow started Saturday, January 14, 2017, isolating several villages in central and eastern parts of the country. For the second time this winter, and third time since 2013, snow reached as far south as Aïn Séfra, a town and municipality in western Algeria known as the Gateway to the Desert.

Roads between Constantine, Batna and Souk Aras were blocked due to heavy snow accumulation and all flights at Constantine airport canceled until further notice, TSA reported Monday, January 16.

The rain started in Bay of Bejaia on Tuesday, January 17, first raining steadily, then heavily and eventually bringing snow to the ground. Bejaia itself measured 76 mm (3 inches) of rain on Tuesday, and the temperature hovered around 3 °C (37.4 °F) all day.

By Wednesday, January 18, more than 140 schools have been closed in Bejaia due to snow-covered or flooded roads. Many schools have been flooded, and in some cases damaged. A ceiling collapse was recorded at the Krim Belkacem High School in Souk el-Tenin. Additionally, thousands of homes in Bejaia were without electricity since Tuesday night. 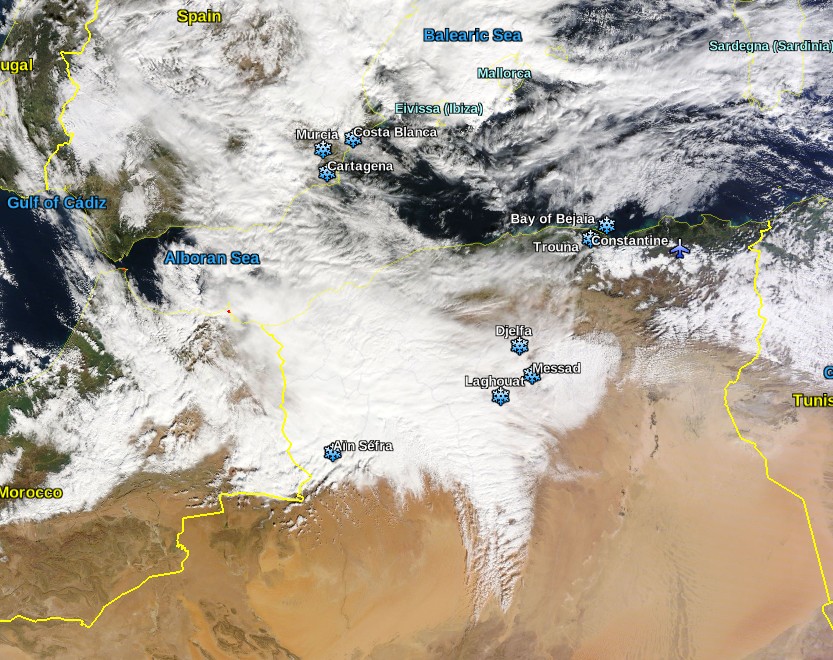 Police said in a statement that heavy snowfall has been falling for several days in the central and eastern regions of the country, almost completely paralyzing car traffic through more than 30 national roads.

On Friday, January 20, the snow was falling in the town of Aïn Séfra for the second time this winter. This town became globally famous last month when a local photographer posted pictures of snow-covered sand dunes. However, contrary to most media reports who said it was the first snow since 1979, TSA quoted the photographer as saying it was the first snow in Aïn Séfra since 2013. The town sits at an elevation of 1 000 m (3 280 feet).

During the week, snow reports were coming in from entire northern Algeria and it continued into the weekend.

Rain and snow are expected to continue in western Algeria on Saturday and Sunday, January 21 and 22, 2017, before the system moves east toward Italy, again threatening eastern parts of the country.

The source is a cutoff low currently situated over the western Mediterranean. The system is expected to move eastward over the next two days, causing gale force winds and intense rainfall.