A cold front that hit northern Honduras on January 7 and 8, 2017 has claimed the lives of at least 4 people and left another 6 missing. Parts of the north saw as much as 150 mm (5.9 inches) of rain on January 8.

Country's disaster management agency (Copeco) said Monday that a total of 137 houses were flooded, 84 of them in Omoa, Cortés and the rest in El Progreso, Yoro.

A naval boat carrying 23 people capsized in a lagoon along Honduras' Mosquito Coast. Three people died in this incident and another five are still missing, Copeco said.

In Roatan, a popular tourism destination in the Honduran Caribbean, a 73-year-old Canadian tourist went missing while scuba diving on Saturday.

A 49-year-old fisherman drowned early Sunday after his boat capsized off the coast of the northern port of Omoa. 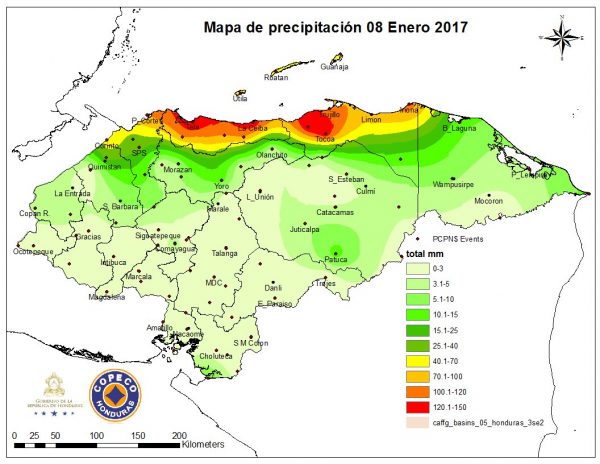 According to the FloodList, between January 8 and 9, Trujillo in Colón recorded 77.9 mm of rain (3 inches). Other areas along the coast, in particular near Tocoa, Colón and La Ceiba and Tela in Atlántida recorded as much as 150 mm (5.9 inches) of rain on January 8.

Several rivers have overflowed, including the Uchapa River in Yoro and the Aguan and Pires rivers in Colón.