The flooding in Bihar, India worsened since August 1, 2016, leaving 22 people dead, the Department of Disaster Management in Bihar reported. In total, 60 people died in flood-related incidents since the mid-July.

Since late July, the districts Saharsa, Gopalganj, East Champaran and Muzafferpur were impacted by flooding, in addition to Kishanganj, Purnea, Araria, Supaul, Katihar, Bhagalpur, Madhepura, and Darbhanga, that have already been affected earlier.

Due to extreme rainfalls that began mid-July, 31 villages in Araria and Supaul had been flooded, as of July 18. More than 1 500 villages were flooded by July 28, and the numbers have drastically increased since, as 2 200 were affected, as of August 2.

1,500 villages have been flooded in Bihar..1.7 million people have been affected by the flooding. pic.twitter.com/hXaiiUEPfz

The Ganges river at Kahalgaon in Bhagalpur remained above the danger level, as of August 2. The Bagmati River at Benibad, the Kosi River at Baltara, and the Mahananda River at Jhawa have also risen above the danger mark, according to Bihar Department of Disaster Management.

In the period between July 15 and July 28, 1.7 million people were affected by the flooding while 378 526 were evacuated. The number of displaced people has since fallen slightly, and 460 relief camps are currently providing shelters to 377 097 people across the affected areas. 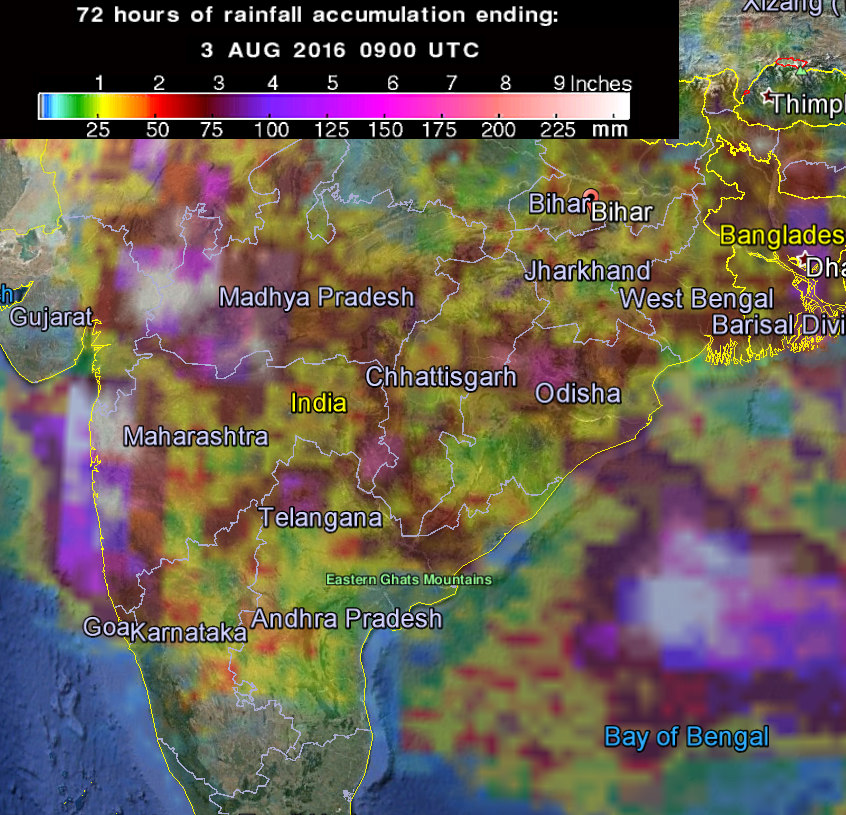 According to Skymetweather, intense monsoon conditions were observed over Konkan and Goa on August 3. Extremely heavy rainfall of 410.4 mm (16.16 inches) was recorded in Mahabaleshwar, 204 mm (8 inches) in Mashik while 198 mm (7.8 inches) was observed in Bhira.

The Southwest Monsoon was active over East Rajasthan were moderate showers were reported over the last 24 hours. 36 mm (1.4 inches) was received by Jaipur, and 26 mm (1 inch) by Kota.