A quick moving Tropical Storm "Colin" has made landfall in Florida, US during the early UTC hours of June 7, 2016. The storm brought strong winds and heavy rain over Georgia, South Carolina, and Florida, knocking out power and causing localized flooding. Florida Governor Rick Scott declared a state of emergency for 34 counties early Monday, June 6. Around 16 million people were under TS Warning.

After Alex and Bonnie, Colin is the third named storm of the 2016 Atlantic Hurricane Season, and the first tropical storm to hit Florida since TS "Andrea" on June 6, 2013. According to the NHC, Colin marked the earliest that a third named storm has ever formed in the Atlantic basin.

The season officially started on June 1, but we had an extraordinary, early season Hurricane "Alex" that formed as a subtropical storm at 21:00 UTC on January 13 about 1 260 km (785 miles) south-southwest of the Azores. Alex was the first tropical or subtropical storm to form in January since 1978, and only the fourth known tropical or subtropical cyclone formation during the month of January on record. When Alex became a hurricane at 15:00 UTC on January 14, it marked only the second recorded hurricane formation in January, with the other being Hurricane "One" in 1938.

Colin formed Sunday, June 5, at 21:30 UTC in the southern Gulf of Mexico about 193 km (120 miles) north of the Yucatan Peninsula. Colin originated from a wave of low pressure that propagated across the tropical Atlantic and northern coast of South America and into the southern Caribbean. As thunderstorm activity picked up, the wave slowly organized into an area of low pressure as it turned northward and passed over the Yucatan. After entering the extreme southern Gulf of Mexico, the low became sufficiently developed to become a tropical depression (TD 3). However, the circulation was not very well organized as it was under the influence of moderate southwesterly wind shear, causing most of the thunderstorm activity to be located well east of the center.

By 15:00 UTC on Monday, June 6, the center of Tropical Storm "Colin" was estimated to be about 455 km (285 miles) west-southwest of Tampa, Florida. The system was moving toward the NNE at about 26 km/h (16 mph), heading toward landfall in Big Bend area of the Florida Gulf Coast.

The storm was disorganized but continued strengthening and by Mid Monday afternoon (local time), flooding was already evident in Clearwater, Tampa, and parts of Tallahassee. The state has activated emergency management center in Tallahassee and placed some 6 000 Florida National Guard members on standby.

Florida Governor Scott said landfall was expected somewhere in the vicinity of Apalachicola in the Florida Panhandle, but emphasized the greatest impact will be well east of the center. This is normal with such early, disorganized storms: 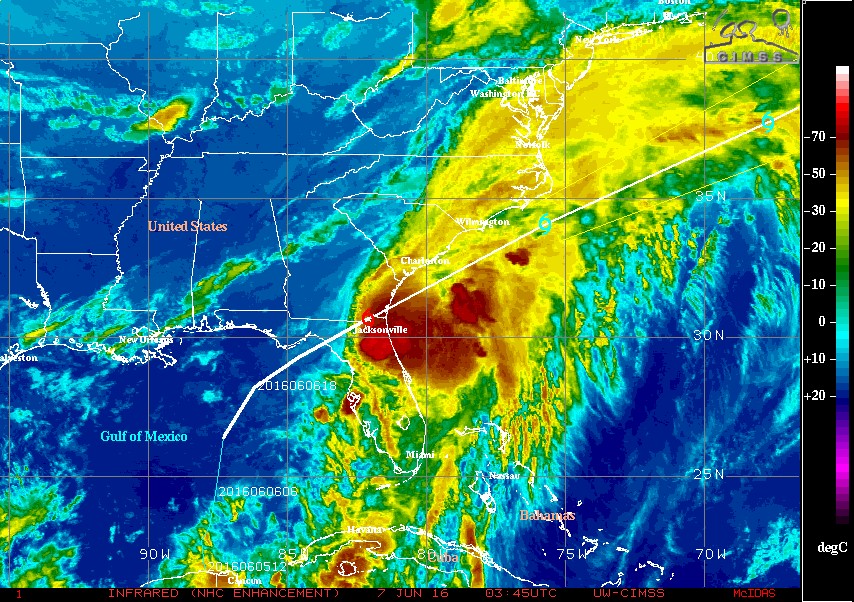 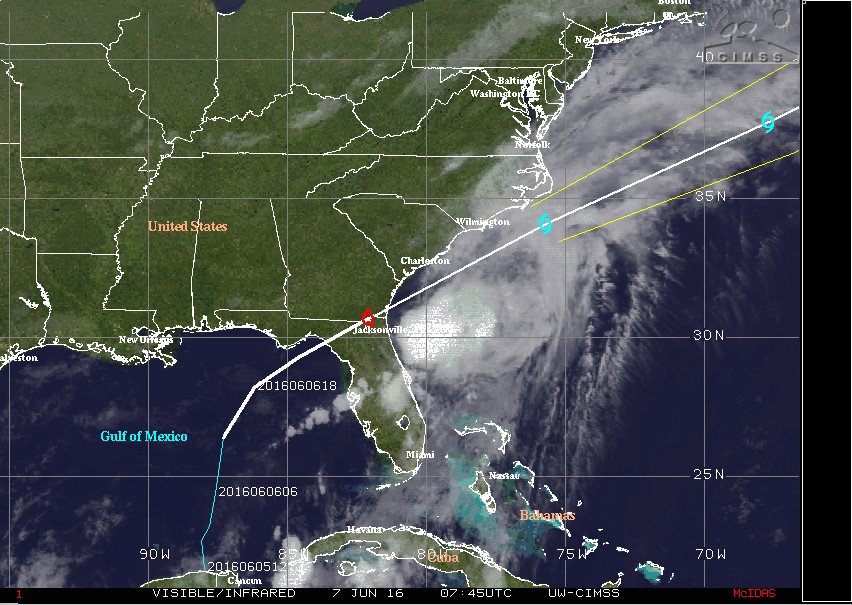 This motion is expected to continue with an increase in forward speed today and tonight (local time). On the forecast track, NHC said, the center of Colin should move near and parallel to the coast of the southeastern United States today.  However, it's important to note that the strongest winds and heaviest rains are well removed from the center.

Some increase in strength is expected during the next 24 hours.  However, Colin is also expected to lose its tropical cyclone characteristics by tonight.

Tropical-storm-force winds extend outward up to 370 km (230 miles) mainly to the southeast of the center.

Colin is expected to produce additional rainfall amounts of 25.4 to 76.2 mm (1 to 3 inches) across eastern North Carolina and central Florida through today. Rainfall is expected to diminish across northern Florida, coastal Georgia, and eastern South Carolina this morning.

The combination of a storm surge and the tide will cause normally dry areas near the coast to be flooded by rising waters. The water could reach the following heights above ground if the peak surge occurs at the time of high tide:

Localized coastal flooding and dangerous surf are possible along the Atlantic coast from Florida to North Carolina within the tropical storm warning area.  The surge along the Florida Gulf coast should diminish today.

The deepest water will occur along the immediate coast.

Tropical storm conditions could occur over portions of the warning area today. A tornado or two will remain possible across parts of the coastal Carolinas today.