Torrential rainfall during late January 2016 triggered severe flooding and landslides in parts of Ecuador. 9 people have lost their lives in weather-related incidents, and numerous homes and infrastructure suffered extensive damage.

Rainfall daily values were above 100 mm (3.9 inches) during intense weather events, according to the Instituto Nacional Meteorologia e Hidrologia (INAMHI). 120 mm (4.7 inches) was recorded at Parque Metropolitano of Guayaquil on January 19 and 244.5 mm (9.6 inches) in Esmeraldas between January 24 and 25. 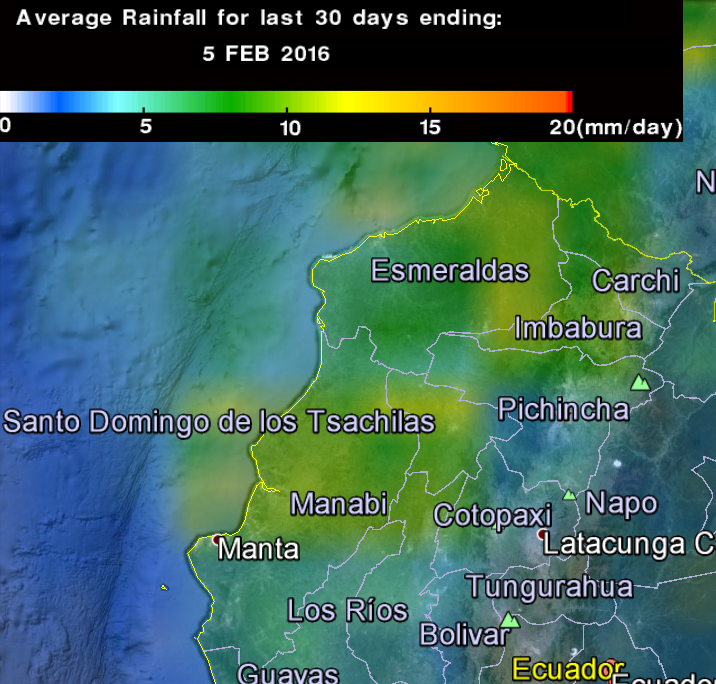 Between January 1 and 25, 803.7 mm (31.6 inches) of accumulated rainfall was measured in Pedro Vicente Maldonado in Pichincha Province while between 430 and 645 mm (16.9 and 25.4 inches) was reported across portions of Pichincha, Esmeraldas, Manabi, Cotopaxi, Santo Domingo de los Tsáchilas and Los RÍos.

Several rivers in the region overflew their banks, causing floods in major towns, including Chone, Esmeraldas and Guayaquil. The Instituto Oceanográfico de la Armada (Inocar) explained the situation in Guayaquil, the state's largest city, was aggravated by the combination of heavy rain and high tide of the Guayas River.

Severe weather conditions have affected 3 864 people. 9 people have died and 2 628 were evacuated from their homes. 1 186 buildings and homes have been affected in total and 45 schools. At least 36 houses were devastated, and many other damages.

Heavy rainfalls and floods have caused traffic disruptions and difficulties in rescue operations across several national roads in Esmeraldas and BolÍvar, El Oro y Loja Provinces. Many small producers of agriculture and livestock across the affected areas also suffered a significant impact.