In the US, farmers have been cultivating GMOs since the 1990s and their consumption is by today widespread across the country. In the EU, on the other hand, usage of GMOs has taken a revolutionary turn after a directive passed in April 2015, which now allows EU member states to opt out using any kind of GMOs. Since then, over half of the member states have opted out of GM crop usage.

Before the directive was passed, anything approved by EU applied for all member states, which caused problems for those who opposed GM crop cultivation because they had to work on blocking these authorization procedures. A few bans were issued based on scientific research, providing evidence that GM crops will provide risks to human and environmental health. However, these bans were regulary challenged and contested legally in both national and European courts, prior to directive passed in April of this year.

The European Commission (EC) claimed that the situation of GM system was undesirable and for the last few years, there have been negotiations on reforming the system, which culminated with the directive which finally allowed EU member states to decide themselves, whether to allow GM crops or not. 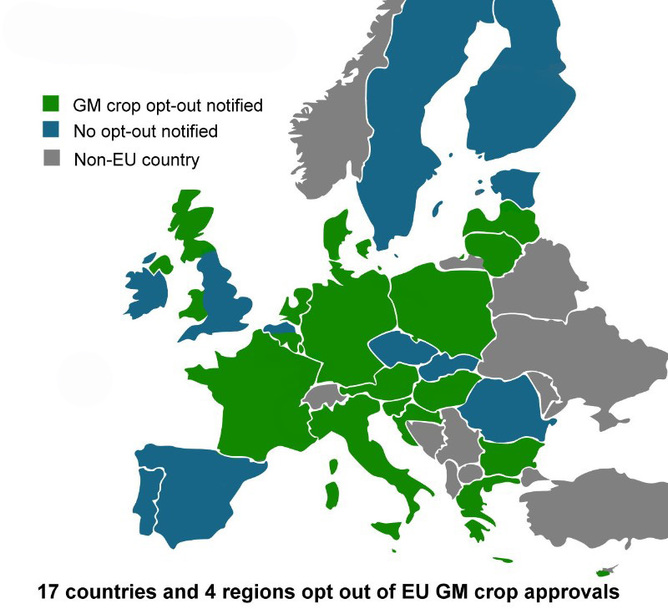 How the opting out process works? Under the directive, any Member State can now ask that all or any part of it's territory should be excluded from the area, where GMOs are approved for cultivation. Request itself is submitted to European Food Safety Authority (EFSA). After EFSA has completed research of potential risks to humans and environment of the requested territory or area, applicant may deny or accept the request of exclusion from GM approved country or area.

But it isn't just about the health of the people and environment. Justifications can also be based on agricultural or public policy objectives, socio-economic impacts, town and country planning, land use and concerns of organic and GM crops co-existing. Also, countries can opt back to include their region or country.

As said before, new directive is for more cases that just human health, which gives member states greater flexibility to decide, whetever to opt out or not. European approach is emphasizing the importance of measures, which allow organic, conventional and GM agriculture to co-exist. Furthermore, it gives farmers and consumers rights to know these policies and choose accordingly. Countries have also right to choose, how they want to practice agriculture themselves.

What basically the new directive wants to say for the entire Union is that, every member can choose their own path of agricultural policies arguing the pros and cons of GMOs, accounting the aspects of health risks, ethical beliefes, environment and then making their decision, how they want to opt out, if at all, by certain region or whole country.