A new tropical storm has evolved in the warm ocean waters of eastern Pacific. Tropical Storm "Patricia" developed on October 21, 2015, off the coast of Mexico, National Hurricane Center (NHC) reports. The storm is currently intensifying and is expected to become a hurricane before making a landfall in southwestern Mexico on October 24. Both a Hurricane Watch and a Tropical Storm watch have been issued for coastal parts of the region, as the system is expected to cause dangerous flash floods and mudslides. 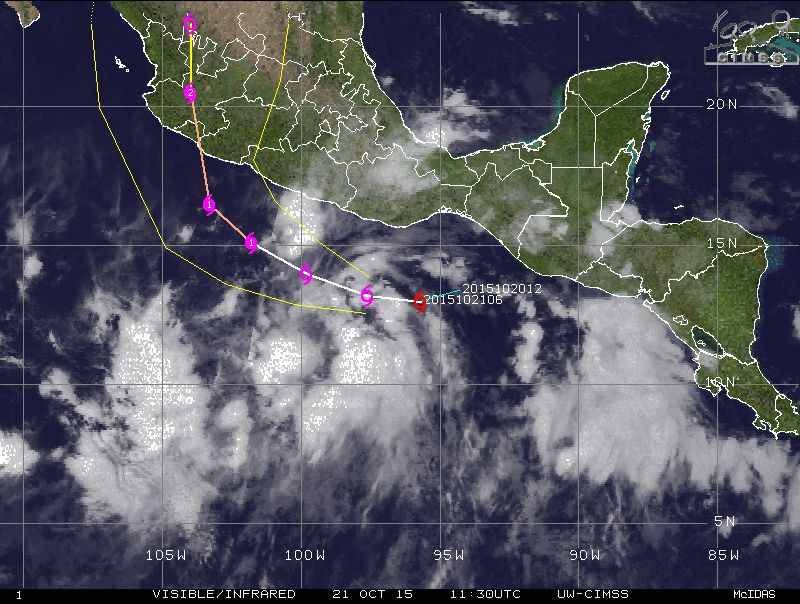 During the next 48 hours Patricia is expected to turn toward the west-northwest and then northwest while gaining forward speed.

The system is now in an environment favorable to allow its intensification, with quite high sea surface temperatures of almost 30 °C (86 °F), light vertical shear and a very moist atmosphere.

Currently, winds of tropical force extend up to 220 km (140 miles) from the center, however the system is expected to strengthen into a hurricane by October 22.

JUST IN: Tropical Storm Patricia becomes the 16th named storm of the season in the eastern #Pacific south of Mexico: pic.twitter.com/dvtVp2wOaS

Tropical Storm "Patricia" is expected to make landfall over southwestern Mexico by October 24, NHC forecasts. The system will gain more strength over the coming days, as well, and is expected to reach at least category 2 prior landfall. If Patricia develops a well-defined inner core, rapid intensification could take place.

A Hurricane watch has been put in place for the regions between Lazaro Cardenas and Playa Perula, while a Tropical Storm Watch is effective from East of Lazaro Cardenas to Tecpan De Galeana.

Tropical storm conditions are possible within parts of the watch area by late October 22 or early October 23, NHC warns. Patricia is expected to bring between 152.4 and 304. 8 mm (2 to 4 inches) of accumulated rainfall across the Mexican states of Jalisco, Colima, Michoacan and Guerrero from late October 22 into October 24. Over isolated parts inside the watch zone up to 508 mm (20 inches) is possible.

Heavy rainfalls could produce life-threatening flash floods and mudslides across the affected area, according to NHC.