Typhoon "Koppu", in the Philippines known as Lando, has brought severe flooding and strong winds to Luzon Island, the main island of the Philippines archipelago. So far, the storm has forced over 65 000 people to evacuate their homes, with death toll reaching 16, as of October 19, 2015, and possibly still climbing.

The system made landfall over Casiguran, Aurora, on October 17, as a category 4 typhoon, lashing the island with heavy rains and strong winds. It continued to move over northern regions of Luzon at a very slow pace, weakening in the process, with a high degree of uncertainty as to how long the system will linger over the affected areas.

Numerous farming villages are immersed in flooding waters across the island, as people ended up stranded on their rooftops and animals helplessly floated down fast-rising rivers, media reported on October 19.

Search and rescue operations are in effect across the storm-swept areas, and the authorities stated they were working on rebuilding damaged roads, infrastructure and power lines.

"We have not reached many areas. About 60 to 70 percent of our town is flooded, some as deep as 3 meters (10 feet). There are about 20 000 residents in isolated areas that need food and water," Henry Velarde, vice mayor of Jaen town in Nueva Ecija province near Manila, said.

It total, almost 183 000 people have been affected by extreme weather conditions brought by Typhoon "Koppu", over 65 000 have been evacuated from landslides prone areas, while about 6 000 people were left stranded in ports across the Luzon, according to the Philippines's disaster agency.

Numerous international aid agencies have offered their emergency supplies, should it prove necessary. UNICEF stated they had available supplies for about 12 000 families, including water purification tables, emergency and hygienic kits, schools supplies, tents, generators and food, the Reuters reports.

The full damage brought upon the fruit and crop plantations is yet to be assessed.

"The rising floodwaters are the most immediate concern but beyond that many people will have to rebuild their livelihoods once the water recedes," International Federation of the Red Cross spokeswoman Kate Marshall said.

About 20 or more typhoons cross the Philippines Archipelago each year, 5 of which turn out to be deadly, according to Asian Disaster Reduction Center (ADRC).

For the time being, it looks like Typhoon "Koppu" will affect the island with heavy downpours and strong winds for at least another 48 hours and cause more flooding with the constant supply of moisture from the South China Sea, according to meteorological experts. 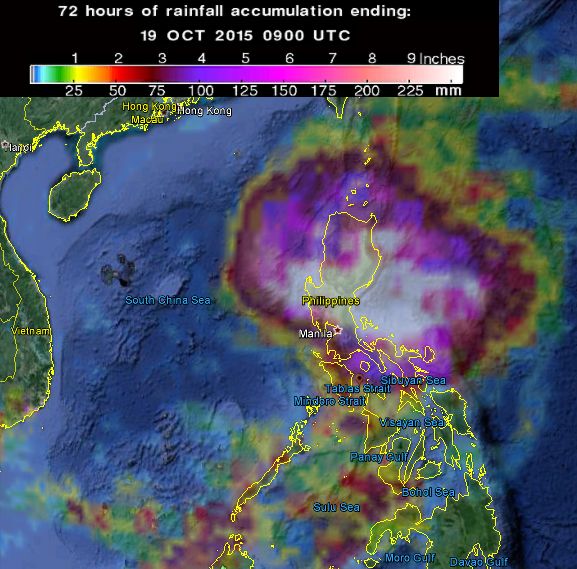 613.3 mm (24.15 inches) of rainfall was reported on October 19, and over 30 cm (1 foot) of additional precipitation is expected to impact the northwestern Luzon over the next couple of days. Because of the additional input of he moist air by Luzon's mountainous terrain, between 500 and 1 000 mm (20 to 40 inches) are possible, especially over the Cordillera Autonomous Region..

"With little to guide its course, it looks as though Koppu will wander up the western side of Luzon … for the next two days. The projected track of Koppu is close to a worst-case scenario for catastrophic rainfall across northern Luzon, home to more than 10 million people," Rob McElwee, Al Jazeera’s senior weather correspondent, said.