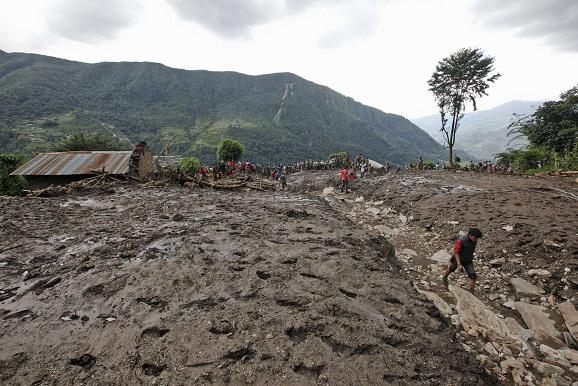 Landslides in Nepal, caused by the heavy rainfall on Thursday, July 30, killed at least 30 people in the villages near Pokhara town, while 42 others remain missing.

Heavy rainfall affected western Nepal over the last couple of days. 116 mm (4.56 inches) of rain was measured in Pokhara city in a 24 hour period, between July 29 and July 30.

Landslide related incidents happened near the start of the Annapurna Circuit, a famous hiking route, around the 10th tallest mountain in the world, visited by more than 100 000 tourists a year.

Around half of the homes in the Lumle village were buried by a strong and fast moving stream of mud and rocks. "We have recovered 15 dead bodies in Lumle alone and another 28 people have gone missing as 14 houses were buried in the landslide, " chief district officer of Kaski District, Krishna Bahadur Raut, said to Xinhua.

Rescue teams are sweeping the area, searching for survivors. "I heard a big demonic sound, I thought it was an earthquake," said Kabi Ram B.K., a 64-year-old farmer, whose daughter and granddaughter were killed when the landslide smashed into their home, Reuters reports.

This year, Nepal was already a victim of two severe earthquakes which killed almost 9 000 people. The earthquake occurrence has increased the risk of landslides across the region which is especially prone to them between June and September, during the monsoon rain season.