A large earthquake swarm is currently underway in Long Valley caldera, Mammoth Lake region of California U.S., east of the Sierra Nevada mountains. The swarm started on Thursday, September 25, 2014, and it is one of the largest earthquake swarms in this region in the past decade or so.

By Monday, September 29, USGS recorded more than 1 100 small scale earthquakes with magnitudes ranging from 0.1 to 3.5 on the Richter scale.

According to USGS seismologist David Shelley, earthquake swarms in the area known at the Long Valley caldera are not uncommon. The last such swarm occurred in July 2014, when about 200 earthquakes of magnitude 2.7 or smaller struck the region.

Still, Shelly said, “this one is a bit more energetic than what we have seen in a while."

As the Long Valley Caldera is part of a "network" of 17 volcanoes throughout the state of California it was initially thought the earthquake activity could be due to volcanic activity in the region but Shelley said they do not believe it is connected to any magmatic activity.

"The earthquakes may have been triggered by water pressure from area hot springs shifting through the ground surface, stressing tectonic plates", Shelly said adding USGS is closely monitoring the earthquake swarm.

"At this point, we don't know if it would continue to die down, or if there'd be another stage to this swarm. There is certainly an interesting scientific opportunity to better understand the processes that are driving this activity," he said for Los Angeles Times. 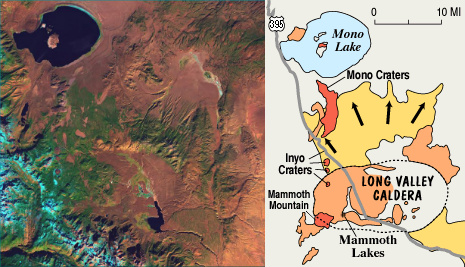 Long Valley caldera is now a 16 x 32 km (20 x 10 miles) oval-shaped depression and only one part of a large volcanic system in eastern California that also includes the Mono-Inyo Craters volcanic chain. This chain extends from Mammoth Mountain at the southwest rim of the caldera northward 40 km (25 miles) to Mono Lake.

It is also one of the earth's largest calderas which formed as a result of a massive volcanic eruption 760 000 years ago. The eruption was so colossal that the magma chamber under the now-destroyed volcano was emptied to the point of collapse.

The collapse caused a larger secondary eruption of pyroclastic ash that burned and buried thousands of square miles. Ash from this eruption blanketed much of the western part of what is now the United States.

Eruptions along Mono-Inyo Craters volcanic chain began 400 000 years ago, and Mammoth Mountain itself was formed by a series of eruptions ending 50 000 years ago.

The volcanic system is still active, according to USGS.

Although no volcanic eruptions are known to have occurred in eastern California since those in Mono Lake, earthquakes occur frequently. These earthquakes are caused by movement along faults and by the pressure of magma rising beneath the Earth's surface, two closely related geologic processes. In 1872, the magnitude 7.6 Owens Valley earthquake was felt throughout most of California, and a number of moderate (magnitude 5 to 6) earthquakes have shaken the Long Valley area during this century. 1

In May of 1980, a strong earthquake swarm that included four earthquakes of magnitude 6 or above struck the southern margin of Long Valley Caldera associated with a 25-cm, dome-shaped uplift of the caldera floor. These events marked the onset of the latest period of caldera unrest that continues to this day.

This ongoing unrest includes recurring earthquake swarms and continued dome-shaped uplift of the central section of the caldera (the resurgent dome) accompanied by changes in thermal springs and gas emissions.2

Most, perhaps all, volcanic eruptions are preceded and accompanied by geophysical and geochemical changes in the volcanic system.

Common precursory indicators of volcanic activity include increased seismicity, ground deformation, and variations in the nature and rate of gas emissions. 2

Numerous small earthquakes occurred beneath Mammoth Mountain from May to November 1989. Data collected from monitoring instruments during those months indicated that a small body of magma (molten rock) was rising through a fissure beneath the mountain.

During the next year, U.S. Forest Service rangers noticed areas of dead and dying trees on the mountain. After drought and insect infestations were eliminated as causes, a geologic explanation was suspected. USGS scientists then made measurements and discovered that the roots of the trees were being killed by exceptionally high concentrations of carbon dioxide (CO2) gas in the soil.3

According to USGS Fact Sheet 073-97 titled Future Eruptions in California's Long Valley Area—What's Likely?, the pattern of volcanic activity over the past 5 000 years suggests that the next eruption in the Long Valley area will most likely happen somewhere along the Mono-Inyo volcanic chain.

"However, the probability of such an eruption occurring in any given year is less than 1%. This is comparable to the annual chance of a magnitude 8 earthquake (like the Great 1906 San Francisco Earthquake) along the San Andreas Fault in coastal California or of an eruption from one of the more active Cascade Range volcanoes in the Pacific Northwest, such as Mount Rainier.

As long as increased volcanic unrest (including earthquake swarms, ground deformation, and CO2 gas emissions) continues in the Long Valley area, the chances of an eruption occurring in the near future will remain somewhat increased. However, evidence from large volcanic areas and calderas worldwide shows that unrest, such as the current activity in eastern California, can persist for decades or even centuries without leading to an eruption.

When an eruption does break out in the Long Valley area, its impact will depend on the location, size, and type of eruption, as well as the wind direction. Also, an eruption during the winter months could melt heavy snow packs, generating mudflows and locally destructive flooding.

Most likely, the next eruption will be small and similar to previous eruptions along the Mono-Inyo volcanic chain during the past 5 000 years. Such eruptions typically begin with a series of steam-blast explosions as rising molten rock (magma) encounters and vaporizes underground water near the Earth's surface. These blasts can throw large blocks of rock and smaller fragments hundreds of feet into the air, leaving deep, circular pits like the Inyo Craters."