Sailing stones, also called sliding rocks and moving rocks, refer to a geological phenomenon where rocks move and inscribe long tracks along a smooth valley floor without human or animal intervention. The engraved trails of rocks on the nearly flat, dry mud surface have been observed since 1940s and studied in various locations, including Little Bonnie Claire Playa in Nevada, and most notably Racetrack Playa, Death Valley National Park, California.

Rock movement has been variously attributed to high winds, liquid water, ice, or ice flotation, but has not been previously observed in action – until now.

In a paper published in the journal PLOS ONE on August 27, a team led by Scripps Institution of Oceanography, UC San Diego, paleobiologist Richard Norris reports on first-hand observations of the phenomenon in Death Valley:

In contrast with previous hypotheses of powerful winds or thick ice floating rocks off the playa surface, the process of rock movement that we have observed occurs when the thin, 3 to 6 mm, “windowpane” ice sheet covering the playa pool begins to melt in late morning sun and breaks up under light winds of ~4–5 m/s.

Floating ice panels 10 s of meters in size push multiple rocks at low speeds of 2–5 m/min. along trajectories determined by the direction and velocity of the wind as well as that of the water flowing under the ice.

Because the stones can sit for a decade or more without moving, the researchers decided to monitor the rocks remotely by installing a high-resolution weather station capable of measuring gusts to one-second intervals and fitting 15 rocks with custom-built, motion-activated GPS units. The National Park Service would not let them use native rocks, so they brought in similar rocks from an outside source.

The experiment was set up in winter 2011 with permission of the Park Service. Then they waited for something to happen. Ralph Lorenz of the Applied Physics Laboratory at the Johns Hopkins University, one of the paper’s authors, suspected it would be  “the most boring experiment ever”.

It turned out to be quite the opposite. 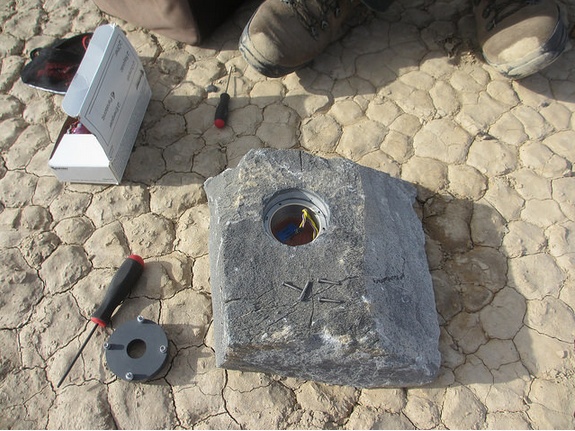 A rock with the cavity that held the GPS instrument package and its battery pack. This rock, MAIA, traveled 162.4 meters in several move events during the time the pond existed on the Racetrack, starting with a 64.1 m move on December 20, 2013. Photo: Richard Norris

On December 21, 2013, Norris and co-authors Jib Ray and James Norris arrived in Death Valley to discover that the playa was covered with a pond of water seven centimeters (3 inches) deep.

Shortly after, the rocks began moving: 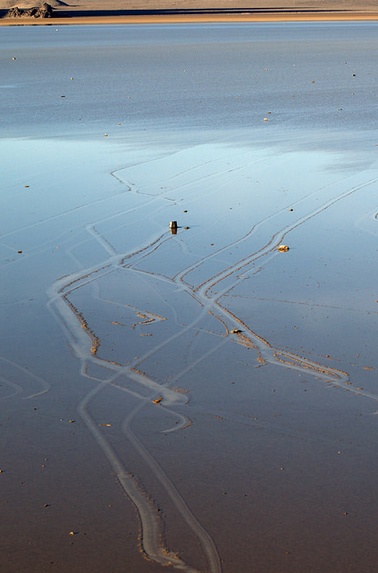 Trails formed on December 20, 2013: The pond has been blown to the north exposing the trails that are still mostly covered with a centimeter of water. Photo: Jim Norris 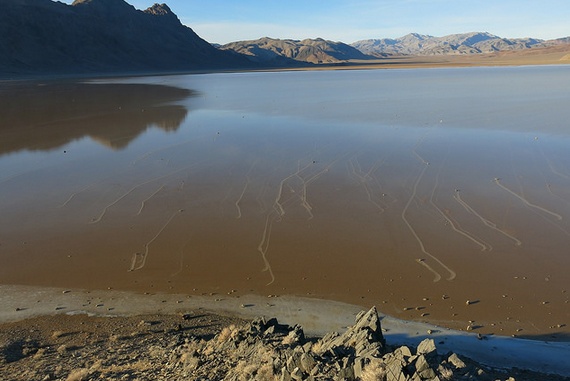 View of the partly flooded Racetrack shortly after the December 20, 2013 move event in which hundreds of rocks scribed trails in the mud under the floating ice; the pond has been blown away to the northeast by light winds exposing inshore trails. Photo: Richard Norris 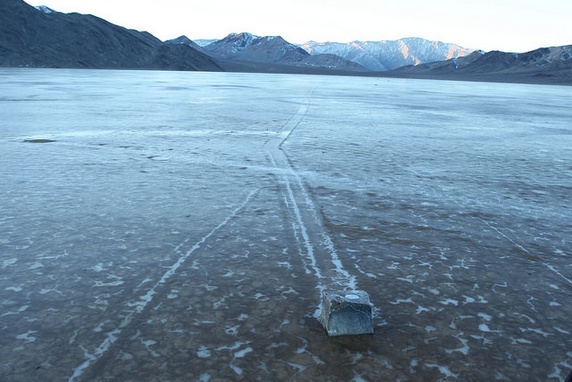 One of the GPS rocks with its trail on a cold morning when the pond surface is still covered with ice. Photo: Mike Hartmann 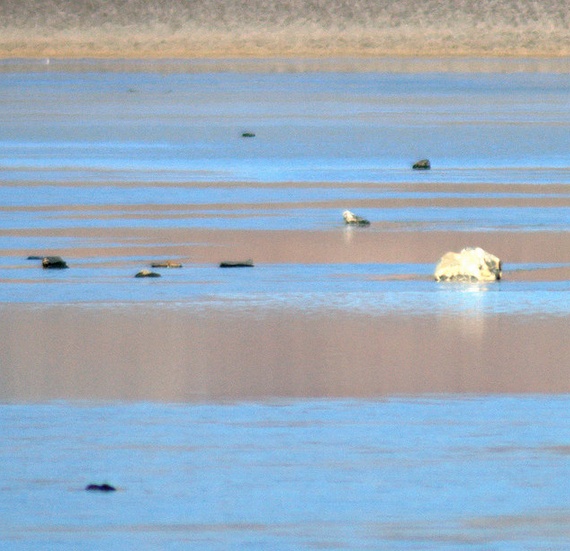 Photo from December 21, 2013 showing a rock that moved across the field of view pushed by a large ice panel. Photo: Jim Norris

“Science sometimes has an element of luck,” Richard Norris said. “We expected to wait five or ten years without anything moving, but only two years into the project, we just happened to be there at the right time to see it happen in person.”

Their observations show that moving the rocks requires a rare combination of events. First, the playa fills with water, which must be deep enough to form floating ice during cold winter nights but shallow enough to expose the rocks. As nighttime temperatures plummet, the pond freezes to form thin sheets of “windowpane” ice, which must be thin enough to move freely but thick enough to maintain strength. On sunny days, the ice begins to melt and break up into large floating panels, which light winds drive across the playa, pushing rocks in front of them and leaving trails in the soft mud below the surface.

“It’s possible that tourists have actually seen this happening without realizing it,” said James Norris of the engineering firm Interwoof in Santa Barbara. “It is really tough to gauge that a rock is in motion if all the rocks around it are also moving.”

The researchers also observed rock-less trails formed by grounding ice panels – features that the Park Service had previously suspected were the result of tourists stealing rocks.