India and China have both made huge steps in their national space programs in last 30 days. At 17:30 UTC on December 1, 2013, China has launched its first lunar rover mission which should land in the Moon's northern hemisphere in mid-December.​

Though this will be the third robotic rover mission to land on the lunar surface, the Chinese vehicle, named Chang'e 3 (eng. Jade Rabbit), carries a more sophisticated payload, including ground-penetrating radar which will gather measurements of the lunar soil and crust. BBC reports:

The 120 kg Jade Rabbit rover can climb slopes of up to 30 degrees and travel at 200m (660ft) per hour, according to its designer the Shanghai Aerospace Systems Engineering Research Institute.

The US Apollo astronauts Eugene Cernan and "Buzz" Aldrin have also remarked in a recent article that the landing module is substantially bigger than it needs to be to carry the rover, suggesting that it could be precursor technology to a human landing.

If successful, the mission, aimed at exploring the Moon's surface and looking for natural resources such as rare metals, will be a milestone in China's long-term space exploration program, which includes establishing a permanent space station in Earth orbit.

Less than month ago, on November 5, 2013, India launched their first Mars probe, Mars Orbiter Mission. The probe is due to enter orbit around the Red Planet on September 24, 2014, two days after USA's MAVEN Mars probe arrives. MAVEN mission was launched on November 18th.

"Following the completion of this maneuver, the Earth orbiting phase of the spacecraft ended. The spacecraft is now (December 1, 2013) on a course to encounter Mars after a journey of about 10 months around the Sun," the Indian Space Research Organization said in a written statement.

If the probe arrives successfully, India's space agency will become the fourth entity to have a mission reach Mars. The United States, Russia and the European Space Agency have already done it. 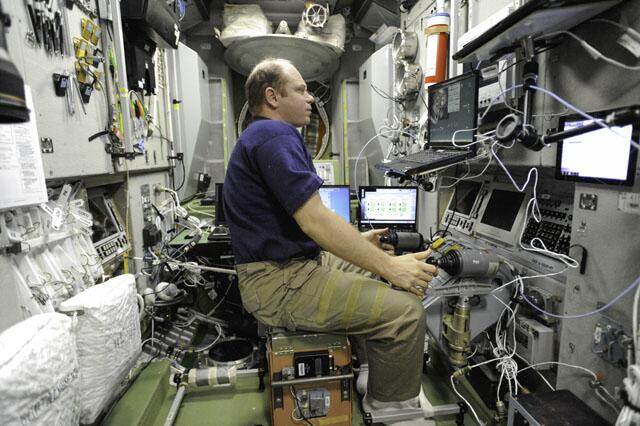 Russian cosmonaut Oleg Kotov guides a robotic Progress cargo ship to its docking with the International Space Station on Friday. Space station controllers were testing an automated docking system, but the system suffered a glitch during Friday's approach. Kotov took the controls and brought the cargo ship in from 60 meters out. Image credit: NASA

About two weeks ago, billionaire Dennis Tito, revealed December 2017 as the date two astronauts will be dispatched to the Red Planet as part of his long-standing scheme.

The robotic Russian Progress 53 ship arrived at the station at 10:30 UTC on November 27th after launching from the Baikonur Cosmodrome in Kazakhstan on November 25. The resupply ship was loaded up with food, fuel and other supplies, including personal cards and holiday wishes for the station's Expedition 38 crew.