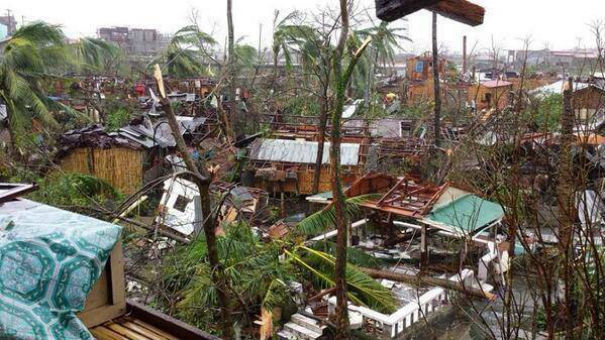 The most powerful typhoon to make landfall in recorded history, Super Typhoon Haiyan, slammed the Philippines on November 7/8, 2013, with powerful winds gusting up to 380 km/h (235 mph). Besides powerful winds, storm surges of up to 3 – 5 meters (10 – 17 feet) that swept into coastal areas and deep inland were responsible for destroying countless homes and claiming lives.

According to the latest estimates, more than 10 000 people are feared dead, which makes it the deadliest natural disaster ever recorded in the Philippines. In 1991 Tropical Storm Thelma (Uring) killed over 5 000 people in Leyte but until Haiyan, the deadliest disaster in the Philippines was in 1976, when a tsunami triggered by a magnitude 7.9 earthquake devastated the Moro Gulf on the southern Philippine island of Mindanao, killing between 5 000 and 8 000 people. 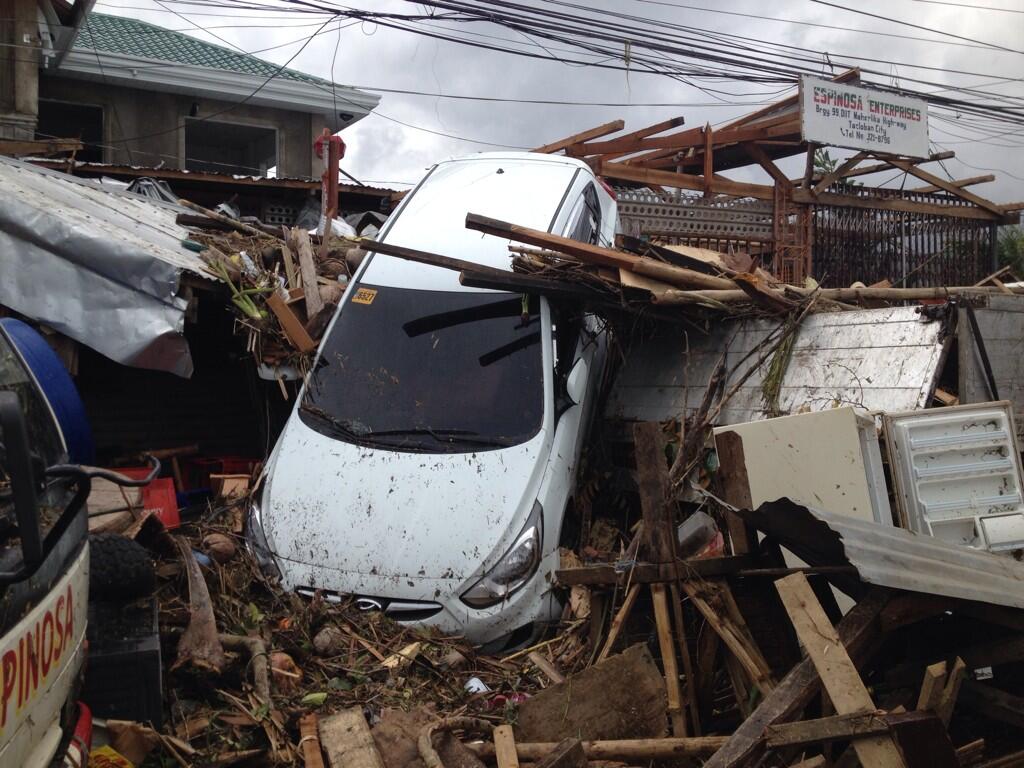 The casualties from Super Typhoon Haiyan, which affected 4.3 million people in 36 provinces, occurred despite preparations that included the evacuation of more than 800 000 people. The National Risk Reduction and Management Council said more than 70 000 families were affected, and nearly 350 000 people were displaced – inside and outside evacuation centers.

More than 80% of the houses and structures along the typhoon's path were destroyed. 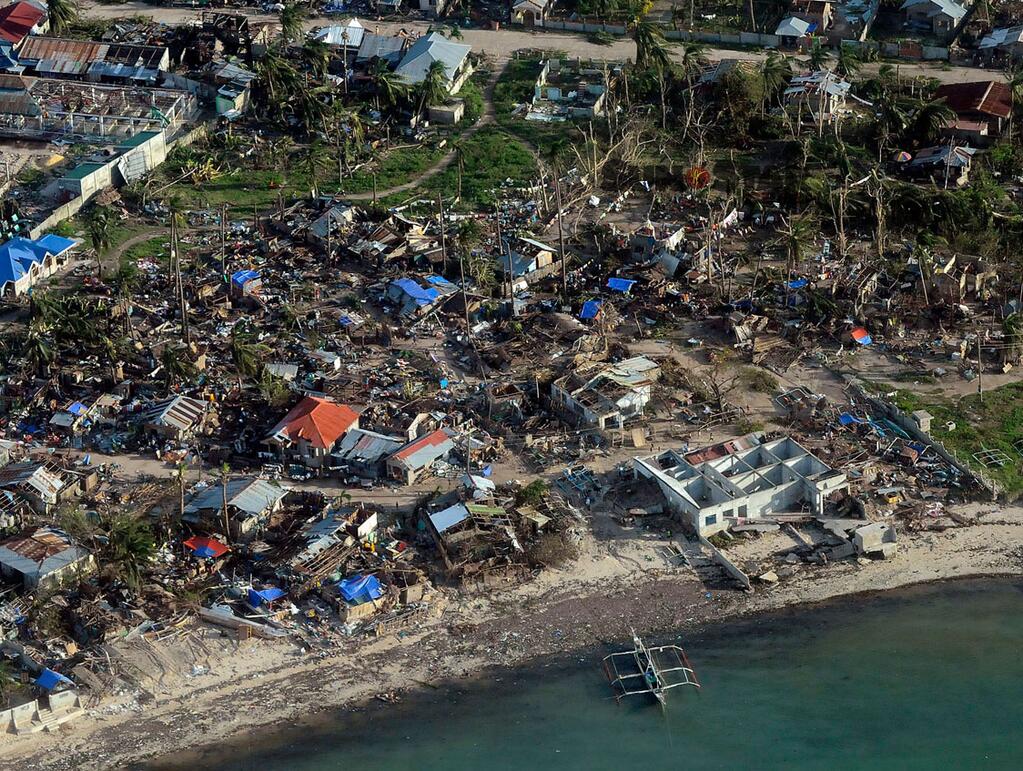 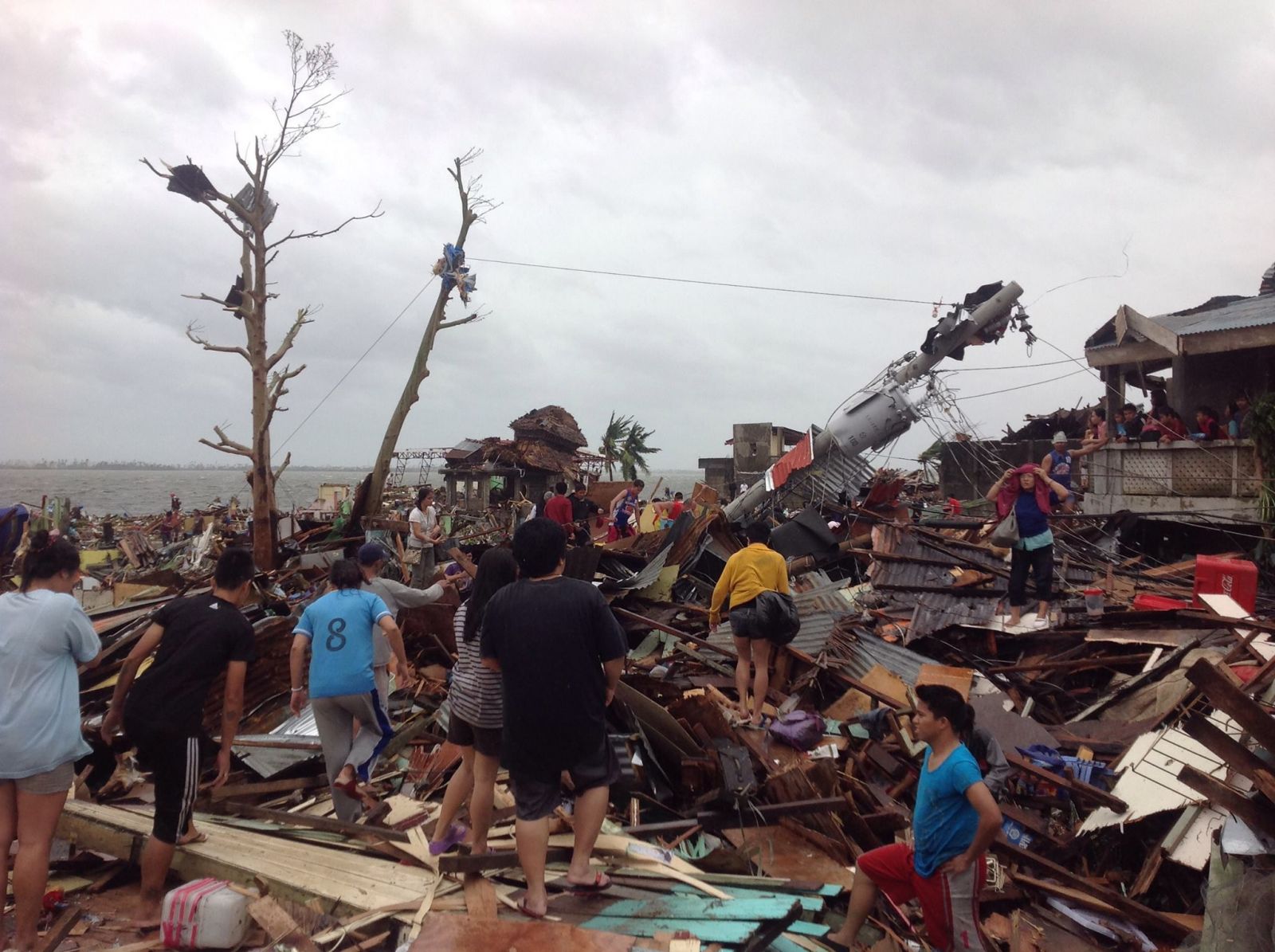 "This is destruction on a massive scale. There are cars thrown like tumbleweed and the streets are strewn with debris. The last time I saw something of this scale was in the aftermath of the Indian Ocean tsunami." Sebastian Rhodes Stampa, the head of a UN disaster assessment coordination team 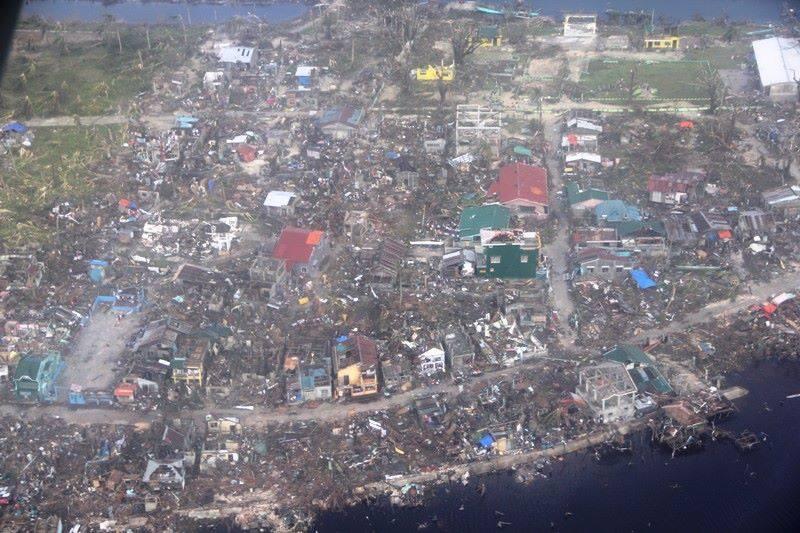 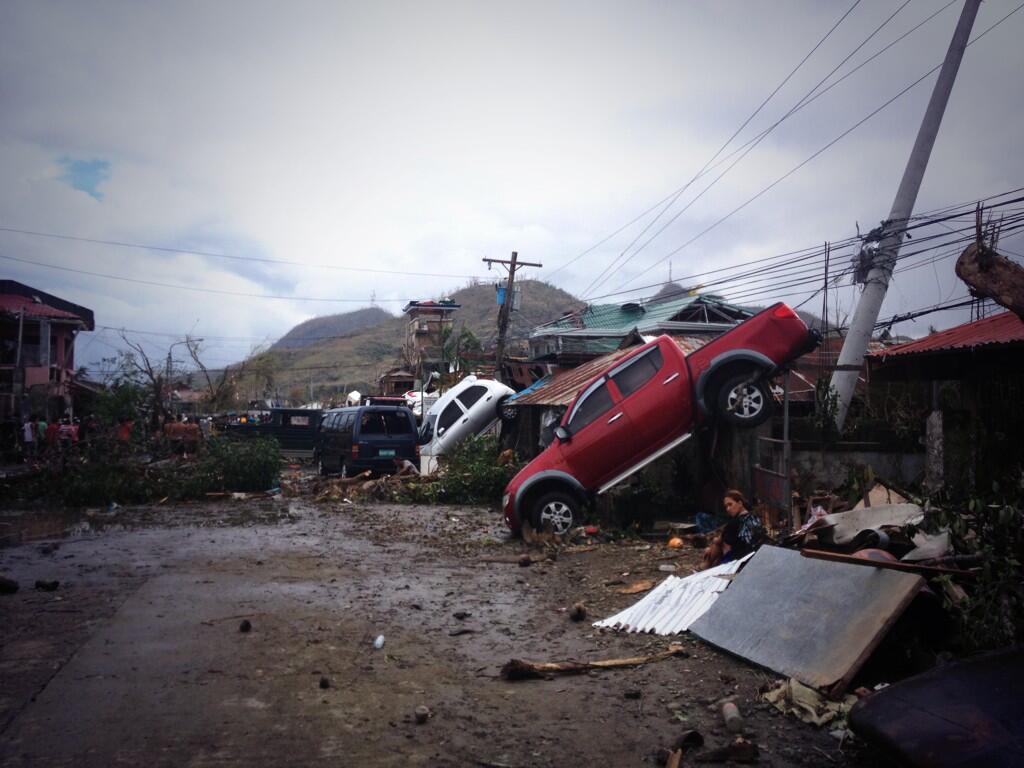 Super Typhoon Haiyan (locally named Yolanda) made its first landfall at 20:40 UTC on November 7, 2013 near Guinan in Samar province), where ground stations recorded sustained winds of 235 km/h (145 mph) and gusts to 275 km/h (170 mph). Just three hours before landfall, JTWC recorded sustained winds of 315 km/h (195 mph) with gusts up to 380 km/h (235 mph). The world's strongest recorded typhoon, cyclone or hurricane to make landfall was Hurricane Camille in 1969, which hit Mississippi with 305 km/h (190 mph) winds, which makes Super Typhoon Haiyan the most strongest storm system to make landfall in recorded history. 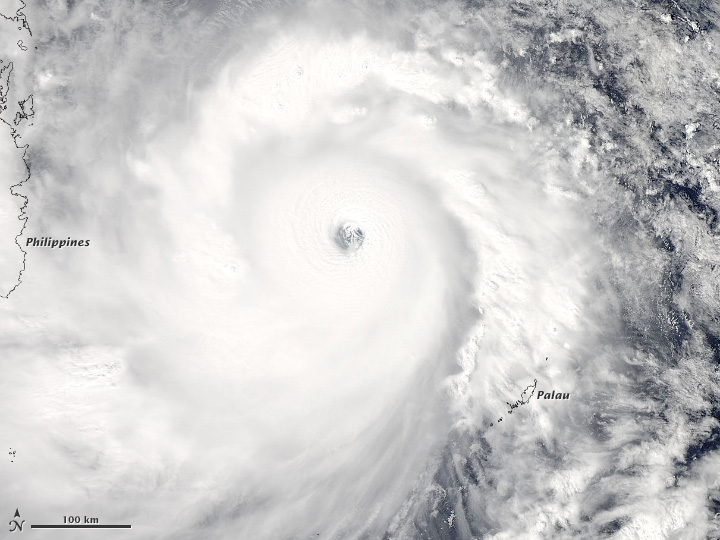 The Moderate Resolution Imaging Spectroradiometer (MODIS) on NASA’s Aqua satellite acquired this natural color image of Super Typhoon Haiyan as it moved west toward the coast of the Philippines at 04:25 UTC on November 7, 2013. According to the Joint Typhoon Warning Center, Haiyan had sustained winds of 280 kilometers (170 miles) per hour at the time. (NASA image courtesy LANCE/EOSDIS MODIS Rapid Response Team at NASA GSFC. Caption by Mike Carlowicz) 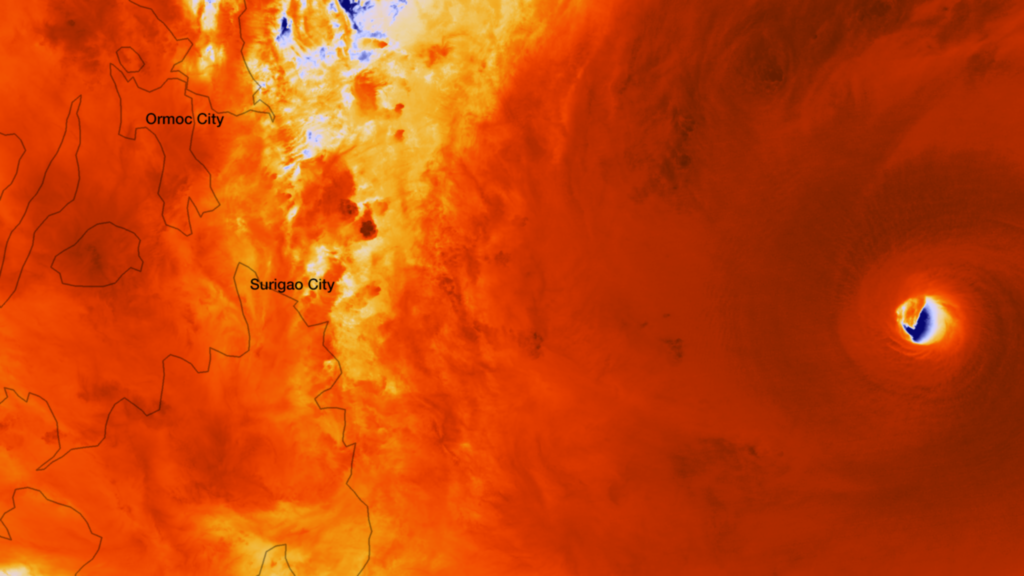 The Suomi NPP satellite captured an incredibly detailed infrared image of Super Typhoon Haiyan's eye as it orbited over the storm at approximately 05:25 UTC on November 7, 2013. (Credit: NASA/NOAA/NNVL)

According to Hugh Willoughby, professor of meteorology at Florida International University, Haiyan was so powerful that instruments couldn't measure it's force.

The left image shows Haiyan's center passed over Panay Island captured by Suomi NPP satellite's VIIRS instrument at 05:14UTC on November 8, 2013. Close-up image on the right is taken at the same time by MODIS on NASA’s Aqua satellite, when winds were estimated to be 270 km/h (165 mph). (Credit: NOAA/SUOMI NPP/LANCE/EOSDIS Rapid Response. Caption by Mike Carlowicz)

Haiyan is the 24th named tropical storm to affect the Philippines in 2013. Cyclones Nari, Utor and Krosa have crossed the Philippines at typhoon strength so far this year. An average of 20 typhoons hit the Philippines every year. Haiyan now weakens into typhoon as it heads west toward Vietnam, where it is likely to made landfall as a Category 1 or 2 typhoon. 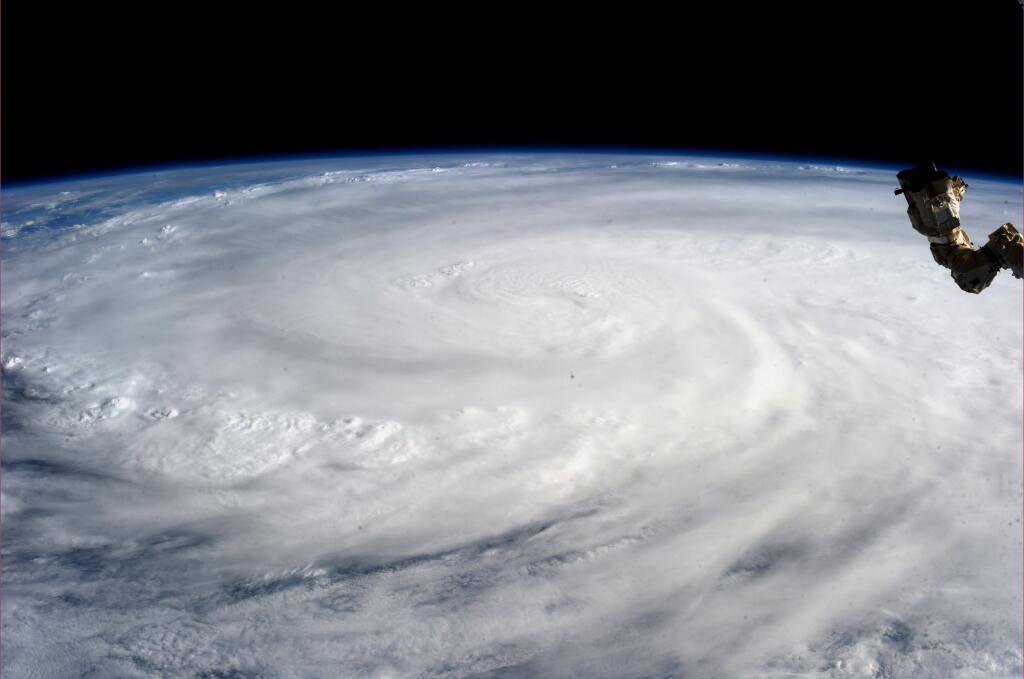