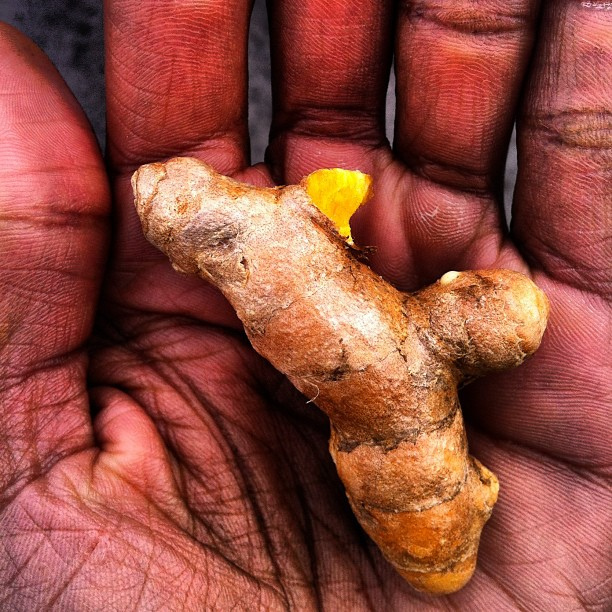 Sometimes called Indian saffron, turmeric is an ancient ayurvedic medicine that has been used for centuries throughout Indonesia and Southeast Asia. It is a powerful anti-inflammatory and antioxidant with a long history of use both medicinally and in cuisine. A perennial plant native to South Asia, turmeric is a member of the ginger family. Some regions use the leaves or eat the root raw, but usually the root is harvested, boiled, then dried in hot ovens and ground into powder. The yellow-orange colored powder is used as a spice, a food additive for coloring, and as a dye. It is the main ingredient in curry powder, an earthy, peppery spice used prevalently in many types of cuisine, from Thai to Indian. Also used by practitioners of traditional Chinese medicine (TCM), turmeric is a symbol of prosperity and considered to be a cleansing herb for the whole body.

Long used in food for its medicinal value, the main component in turmeric is the phytochemical curcumin, which is a strong anti-inflammatory that helps fight viral infection, cancer, and arthritis (http://www.ncbi.nlm.nih.gov/pubmed/22921746). Its antioxidant properties help to neutralize free radicals, stimulate the gall bladder, and protect the liver. Turmeric has been shown to reduce the cellular inflammation and oxidative stress that causes degenerative disease. It improves blood flow, which improves cognitive function and speeds wound healing.

Researchers are investigating the benefits of turmeric for treating Alzheimer's, cancer, diabetes, arthritis, HIV, cataracts, gallstones, endometriosis, atherosclerosis, heart attacks, and more. Bach says it has antioxidant properties that inhibit the development of free radicals, and neutralizes existing ones. Some research shows turmeric to have anti-fungal and anti-bacterial compounds as well. It is one of the most-studied herbs today. Turmeric truly is a superfood.

The phytonutrients in turmeric

There are more than 90 active constituents found in turmeric, many with overlapping biological activities (http://www.herballegacy.com/Alter_Chemical.html). Some of them are:

• Several carotenoids, xanthophylls and carotenes, indicated by bright yellow, orange, and red colors, they either convert to vitamin A (for immunity) as needed by the body, or combat free radicals and prevent heart disease, according to the Mayo Clinic

• Resin, a fatty substance in the root that is soluble in ether and a glucoside, turpethin reduces pain and inflammation

• Cineole and other monoterpenes

Each constituent has many health benefits, but they also work synergistically together, making the whole herb more powerful than any singled out ingredient on its own. When using the powder, there is little to no essential oil. This is of note because some researchers believe that some of the health benefits come from the oil. Likewise, curcumin removed from turmeric may be a more potent antioxidant than turmeric, while giving up some of the other health benefits found in the whole herb.

Actions and uses of the primary constituents

According to herballegacy.com, the phtyochemical's health benefits are legion. The cited phytochemical and ethnobotanical database attributes the following biologic activities to the constituents lists above:

Curcumin is the main curcuminoid of turmeric, and responsible for most its biological activity (http://en.wikipedia.org/wiki/Curcumin). Curcuminoids are natural phenols that give turmeric its distinct yellow-orange color. Turmeric contains up to five percent essential (also called volatile) oils and five percent curcumin. Curcumin, a polyphenol, is a pH indicator turning yellow in acidic solutions and red in alkaline solutions. It is a potent antioxidant that acts as an anti-mutagenic, meaning it stops cells from mutating. It stops toxic compounds from reacting with body tissues. Curcumin is also credited with improving communication between cells. It is being studied as a treatment for Alzheimer's. (http://www.ncbi.nlm.nih.gov/pubmed/22924511)

The other two curcuminoids are desmethoxycurcumin and bis-desmethoxycurcumin (http://www.naturalnews.com/031461_turmeric_superfood.html). Together, these phytochemicals work to counteract the causes of most coronary, chronic, and autoimmune diseases usually set in motion by poor diet choices and other toxins such as pharmaceuticals. (http://www.naturalnews.com/035615_turmeric_heart_curcumin.html)

Another phtyochemical of note in turmeric is 1,8-cineole. It is an antiseptic and expectorant that eliminates gas and stimulates the central nervous system (http://www.herballegacy.com/Alter_Chemical.html). This means it aids circulation, improves blood vessel health and elasticity, lowers bad cholesterol, improves physical endurance, and inhibits platelet aggregation.

In addition to all the phytonutrients and phytochemicals present in turmeric, its high ORAC score of almost 160,000 means it also helps boost the body's own resources, such as the natural antioxidants glutathione, superoxide dismutase, and catalase (http://www.naturalnews.com/031461_turmeric_superfood.html). These substances help the cells function optimally, protecting organs and tissues from oxidation.

Turmeric can be difficult to absorb, so it is sometimes mixed with black pepper, which makes it more bioavailable. Curcuminoids are soluble in dimethyl sulfoxide, acetone, and ethanol, but not in lipids, making it difficult to successfully synthesize.

Anyone taking prescription blood thinners, anti-coagulants, or has biliary tract obstruction should not take turmeric or curcumin because it stimulates bile secretion. If it is indicated for your condition, be sure to verify if you should use the powder, a tincture, or a poultice. Enhance absorption by taking it with black pepper or bromelain/pineapple. Pineapple will also help with the stomach distress prolonged use of curcumin can cause. People with congestive heart disease and who don't know the cause should also avoid curcumin, as should those who have trouble with blood clotting. It is also not recommended for people with painful gallstones, toxic liver disorders, bilious colic, or obstructive jaundice, according to Bach. If pregnant or trying to become pregnant, check with a qualified practitioner.