A new submarine eruption started on September 28, 2013 NW of the island Jebel Zubair in the Red Sea. The ongoing eruption is SW of the 2011-12 eruption which created a new volcanic island there.

This is occurring along the Zubair Group, a collection of small islands off the west coast of Yemen. Running in a roughly northwest-southeast line, the islands poke above the sea surface, rising from a shield volcano. This region is part of the Red Sea Rift where the African and Arabian tectonic plates pull apart and new ocean crust regularly forms.

The latest activity manifested itself in form of a strong SO2 anomaly and steam plume spotted on satellite imagery.

The presence of the significant steam plume suggests that the eruption vent is a shallow depth (less than 100 m), and possibly in the stage of producing so-called surtseyan activity (violent steam-driven explosions breach the surface with jets of water and steam, and become more and more rich in lava fragments as the vent becomes shallower). 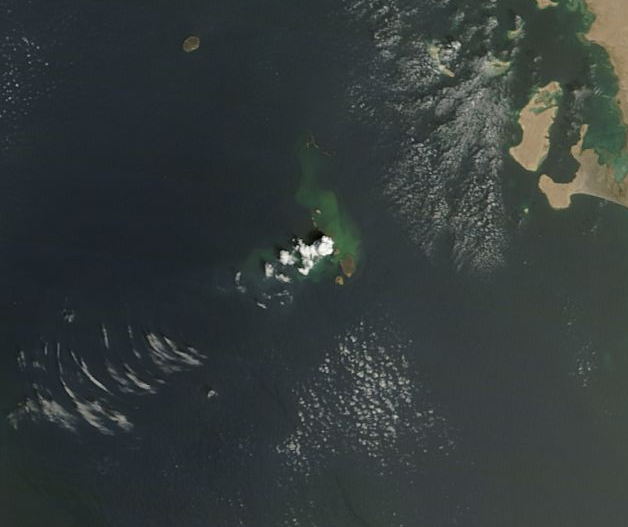 An undersea eruption that began in mid-December 2011 resulted in creation of new island there. Imagery acquired on December 23, 2011 from the Advanced Land Imager (ALI) on NASA's EO-1 satellite showed a new island at the location with a plume rising from it, roughly 500 m N of Rugged Island and more than 500 m in diameter: 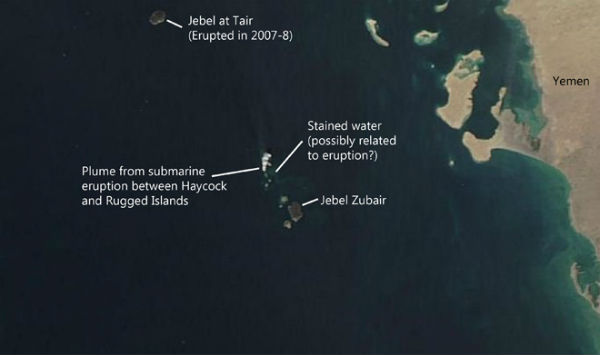 Satellite image from January 7, 2012, suggested that the eruption has risen nearly completely above water. A plume of steam, other volcanic gases, and ash spewed from a distinct cone. The land surrounding the vent has grown, and was about 530 by 710 meters (1 700 by 2 300 feet) across. Once above water, past eruptions in the Zubair Islands were primarily effusive, with relatively runny lava forming thin lava flows. In contrast to the fragmented rock that forms when lava interacts directly with water, lava that solidifies on land is tough, so this new island is likely to stick around. 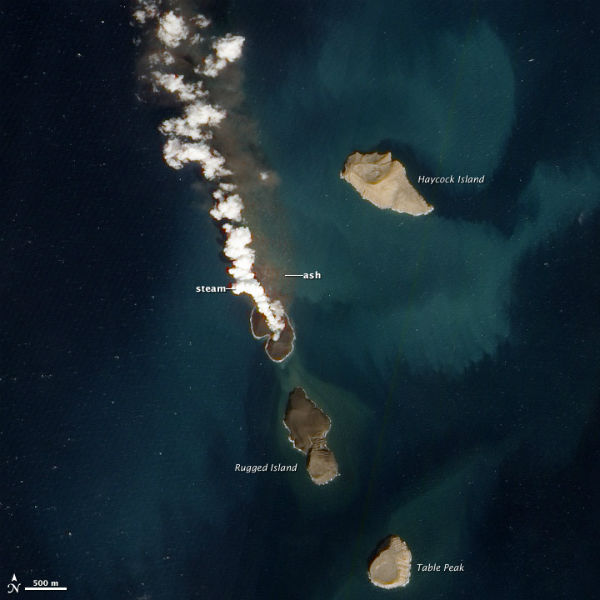 The 5-km-long Jebel Zubair Island is the largest of a group of 10 small islands and submerged shoals that rise from a shallow platform in the Red Sea rift. The platform and eruptive vents forming the islands and shoals of the Zubair Group are oriented NNW-SSE, parallel to the rift. An early explosive phase was followed by a brief period of marine erosion, and then by renewed explosive activity accompanied by the extrusion of basaltic pahoehoe lava flows. This latest phase of activity occurred on the morphologically youngest islands of Zubair, Centre Peak, Saba, and Haycock. Historical explosive activity was reported from Saddle Island in the 19th century. Spatter cones and pyroclastic cones were erupted along fissures that form the low spine of Zubair Island (GVP).