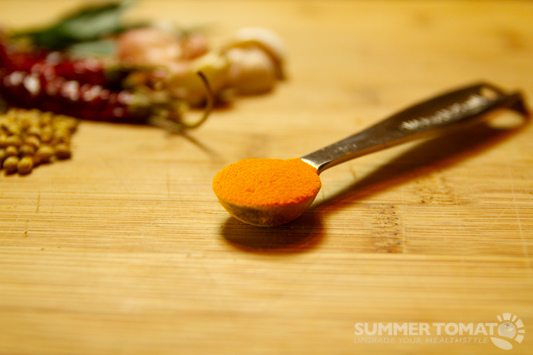 Ancient Indians understood turmeric to be the physical essence of the Divine Mother. Modern science now confirms that it has therapeutic properties relevant to well over 500 health conditions, and may bestow on those who take it, protection from many common causes of suffering.

The author has personally reviewed the majority of 4,000+ biomedical citations on turmeric and its primary polyphenol curcumin, available to view on the National Library of Medicine's bibliographic reference database known as MEDLINE (and searchable through engines like Pubmed.gov), and has been awed by how diverse, powerful and seemingly ideally suited this spice is for addressing the broad range of diseases and/or disease symptoms that commonly afflict our species.

One of the novel findings that emerged in the author's comprehensive review of turmeric is that it expresses over 150 distinct benefical actions, describable in terms of traditional pharmacological pathways, e.g. interleukin-6 down-regulator, apoptotic, cyclooxygenase inhibitor, etc. During the indexing process the image emerged of a many-armed Goddess, due to how diverse, intelligent and simultaneous are this spice's healing gifts.

In fact, from the perspective of monochemical-oriented pharmacology, a drug with more than 10 simultaneously therapeutic actions, and without the vast array of adverse, unintended side effects commonly associated with novel, patentable chemicals, turmeric would represent an impossible, miraculous entity, which if patentable, would generate more revenue than all the blockbuster drugs on the market put together.

After some reflection on the mass of data that accumulated on turmeric's ability to alleviate suffering, the question emerged: are these many "evidence-based," scientific studies really just exoteric descriptions of "compassion" and "intelligence"?  Are we now rediscovering through the optic of modern science — albeit through the reductionist and inherently animal sacrifice-based methodology of empirical science — the "spirit" of herbs like turmeric, whose very existence represent a kind of surplus of benevolent, regenerative energy that permeates the universe, bestowing its grace upon its inhabitants/creations? Is this not what the ancients meant, or saw, when they described the spice in Sanskrit as "Gauri" ("The One Whose Face is Light and Shining") and "Kanchani" ("Golden Goddess")?

Our turmeric database on GreenMedInfo.com (and by "our" I mean yours, as well, as this is an open source project) now contains the world's largest archive of biomedical data on the subject of turmeric's medical value, and includes voluminous research on turmeric's potential to prevent and/or treat multi-drug resistance cancers, chronic degenerative conditions, neurological problems, depression, serious infections, as well as hundreds of other diseases.  Please share this information with others, especially those who need an "evidence-bridge" connecting ancient healing wisdom with the modern scientific approach.