Solar activity has been at moderate to high levels for the past 24 hours. AR1652 produced two M-class and 8 C-class solar flares  in the past 24 hours, and it has rapidly evolved to a compact beta-gamma-delta configuration. This active region erupted M1.0 flare at 00:50 UTC, followed by M1.7 solar flare at 08:38 UTC on January 13, 2013. 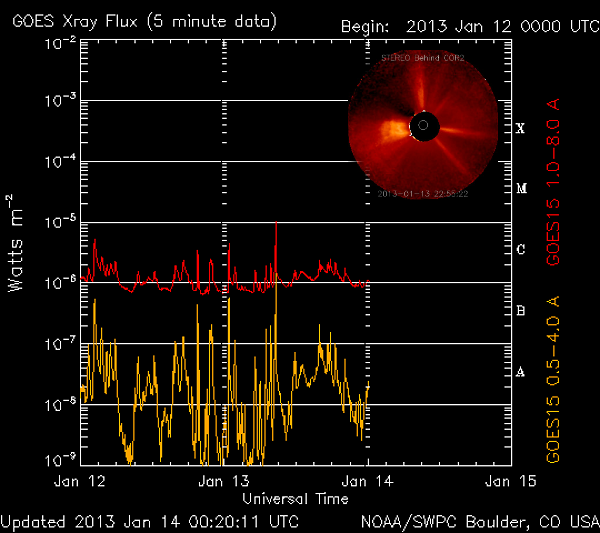 The second (M1.7) eruption was associated with a metric Type II and IV radio emissions. Type II emissions occur in association with eruptions on the Sun and typically indicate a coronal mass ejection (CME) is associated with a flare event. Type IV emissions occur in association with major eruptions on the Sun and are typically associated with strong coronal mass ejections and solar radiation storms. Both flares were quite impulsive with no obvious CME signatures. If this is confirmed, geomagnetic conditions should be mostly quiet during the next 48 hours, but due to the risk of a geoeffective CME, warning conditions are issued. 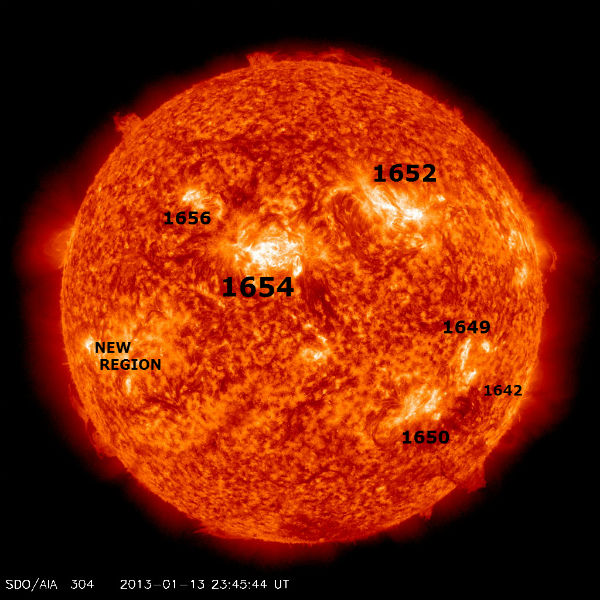 There are currently six numbered sunspots on the visible disk. Sunspots AR1652 and AR1654 have beta-gamma magnetic fields that have the potential for M-class flares, with a small risk of an X-class flare from AR1654. Huge sunspot group AR 1654 is crackling with C- and M-class solar flares, and it poses a threat for even stronger eruptions. NOAA/SWPC forecasters estimate a 65% chances of M-class and 10% chance of X-class solar flares in the next 24 hours. There are no large coronal holes on the Earthside of the Sun. 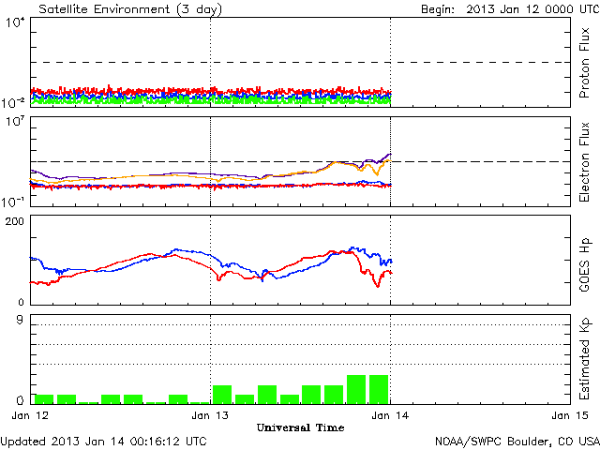 Earth is entering a stream of moderately fast (500 km/s) solar wind stream which could spark some geomagnetic activity. The geomagnetic field has been at quiet to unsettled levels for the past 24 hours. Solar wind speed, as measured by the ACE spacecraft, reached a peak speed of 511 km/s at 20:43 UTC on January 13, 2013. Total IMF reached 11.1 nT and the maximum southward component of Bz reached -8.3 nT.

NOAA/SWPC forecasters estimate 15% chances for geomagnetic disturbances at high latitudes in the coming hours. Weak or minor degradation of HF radio communication is possible on sunlit side with occasional loss of radio contact and degradation of low-frequency navigation signals for brief intervals. High-latitude sky watchers should be alert for auroras.