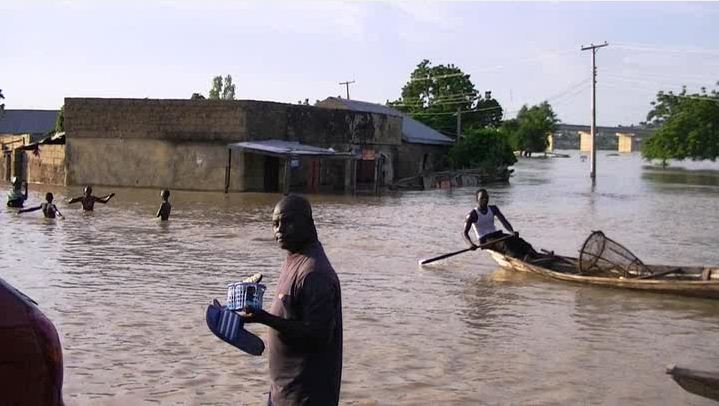 Since July, devastating floods affected 30 of the Nigeria's 36 states, displacing more than 2 million people.  The Nigerian Red Cross said there’s no telling when families will be able to return, and when they do, they will need help rebuilding their homes, and their lives. Situation in camps is serious – there is severe lack of food and clean drinking water. President Goodluck Jonathan has promised to release additional funds for the procurement of medicine and seedlings for victims, particularly those in Benue state. Punch reported that severe hunger has hit over 400 children at Ula-Ehuda Camp in Ahoada East Local Government Area of Rivers State. There is also a high risk of epidemics breaking out in the affected areas.

Flooding started in Plateau State in central Nigeria in July, spread through Borno, Cross River, Ebonyi, Nassarawa, Bauchi, Gombe, Katsina and Kebbi states in August, hit Taraba Benue, Niger, Kaduna and Kano in September, before affecting Delta and Bayelsa states in September and October. The Benue and Niger Rivers converge in southern Nigeria, and from there the Niger flows south toward the sea.

According to the National Emergency Management Agency (NEMA), 431 fatalities have been reported and many more are considered missing.  2.1 million others were displaced. Floods caused major damage to crops, livestock and infrastructure, destroying roads and bridges. According to Emenike Umesi, NEMA’s zonal coordinator in Port Harcourt, thousands of houses, health clinics and hospitals, as well as dozens of schools, churches and government buildings have been destroyed or damaged in Delta State. Many displaced residents are wondering why the government has not done more to prevent flooding which occurs every year during the August to October rainy season in these low-lying areas. Flash floods are common in Nigeria in the rainy season (May to September), but news reports characterized this year’s floods as the worst in more than 40 years. Rainy season is not over yet and more flooding is expected.

John Campbell, a senior fellow at the Council on Foreign Relations and a former U.S. ambassador to Nigeria wrote that the United Nations and other organizations have “sounded the alarm” at the approach of similarly large-scale humanitarian crises in the region, accusing  Western media for entirely ignoring the problem according to VOA.