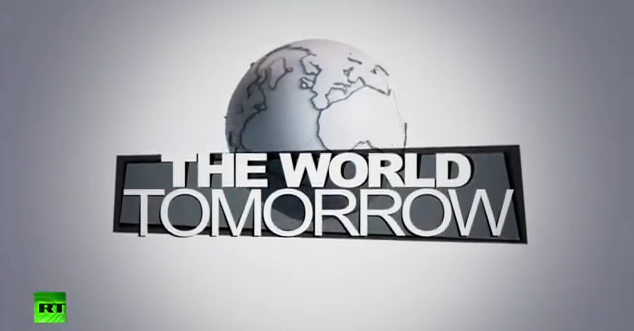 Since April 2012 Russia Today (RT) is broadcasting “The Julian Assange Show” where the Edior in chief of WikiLeaks interviews powerful people from around the world. In their own words RT is a global news channel broadcasting from Moscow and Washington studios. With a global reach of over 530 million people, or 25% of all cable subscribers worldwide, RT news covers the major issues of our time for viewers wishing to question more.

The announcement that RT would host Assange’s show created a global media stir, with many questioning the RT/Assange link-up. Assange explained his rationale:

“A lot of the things that we have been trying to report have not been carried accurately in the mainstream press. There are many, many fine exceptions but when we look at international networks there’s really only two that are worth speaking about, and that’s RT and Al Jazeera.”

RT Editor in Chief Margarita Simonyan sees no coincidence in the connection: “RT is rallying a global audience of open minded people who question what they see in mainstream media and we are proud to premiere Julian Assange’s new project. We provided Julian a platform to reach the world and gave him total editorial freedom. He is absolutely the right person to bring alternative opinions to our viewers around the globe.” (RT)

What brought Assange, under house arrest without charge, to the RT screen?

“First of all, being under house arrest for so long, it’s nice to have an occasional visitor and to learn more about the world. And given that the conversations we were having are quite interesting, why not film them and show other people what was going on.”

Incredibly, his detention became an ace card in his TV journalism debut as the show “revealed sides of very interesting and important people that are not normally because they are not dealing with a standard interviewer, they are dealing with someone who is under house arrest, who has gone through political problems that they can sympathize with.”

Julian Paul Assange (born July 3, 1971) is an Australian editor, activist, publisher and journalist. He is best known as the editor-in-chief and founder of WikiLeaks, a media website which has published information from whistleblowers. The site acts as a conduit for worldwide news leaks, with a stated purpose of creating open governance.

Assange was a hacker-activist in his youth, before becoming a computer programmer and then becoming internationally renowned for his work with WikiLeaks. He has lived in several countries and has made public appearances in many parts of the world to speak about freedom of the press, censorship, and investigative journalism. While in England under house arrest, Assange hosted a political talk show called The World Tomorrow, which was broadcast in 2012. He has received numerous awards and nominations, including the 2009 Amnesty International Media Award, Readers’ Choice for Time magazine’s 2010 Person of the Year, the 2011 Sydney Peace Foundation gold medal and the 2011 Martha Gellhorn Prize for Journalism.

International attention for WikiLeaks rose in 2010 when, with its partners in the news media, it began to publish U.S. military and diplomatic documents. Bradley Manning has since been arrested on suspicion of supplying the cables to WikiLeaks, and the United States Department of Justice is still investigating whether Assange can be prosecuted. Since December 2010, Assange has been subject to a European Arrest Warrant in response to a Swedish police request for questioning in relation to a rape and sexual assault investigation. Since 19 June 2012, he has been residing in the Ecuadorian embassy in London, where he has since been granted diplomatic asylum. The British government intends to extradite Assange to Sweden under that arrest warrant if he leaves the embassy, which Assange says he fears may result in his subsequent extradition to the United States of America to face charges over the diplomatic cables case.

WikiLeaks was founded in 2006. That year, Assange wrote two essays setting out the philosophy behind WikiLeaks: “To radically shift regime behaviour we must think clearly and boldly for if we have learned anything, it is that regimes do not want to be changed. We must think beyond those who have gone before us and discover technological changes that embolden us with ways to act in which our forebears could not.” In his blog he wrote, “the more secretive or unjust an organization is, the more leaks induce fear and paranoia in its leadership and planning coterie…. Since unjust systems, by their nature, induce opponents, and in many places barely have the upper hand, mass leaking leaves them exquisitely vulnerable to those who seek to replace them with more open forms of governance.” (Julian Assange biography (Wikipedia))